In the tradition of the last two years…

Not published this year, just read this year, savvy?
Discovery of the Year
Ayn Rand/Mary Gaitskill (The Fountainhead/Two Girls, Fat and Thin)

What may initially appear to be an odd choice, seeing as this is also the year I’ve discovered so many amazing books that haven’t made me nearly have a nervous breakdown and doubt my entire life’s purpose, makes more sense when you consider just how much of an impact someone has had on my life by writing a book.
The Fountainhead was the medicine, Two Girls the spoon full of sugar. Only by reading Gaitskill’s beautifully written and hilariously funny (if extremely odd and possibly hugely triggering) critique of objectivism with her Satire of Anna Granite was I able to stop seeing The Fountainhead as this be-all-and-end-all text and start seeing it for the brilliant fiction book it is.
Again, massive thanks to all those who put up with me throughout the blogalong The Fountainhead challenge, and to Lingmops for making me do it!
Series of the Year

A Song Of Ice and Fire by George R.R. Martin
Had to be really. I love these books, of which I’ve read the first three (the third being in two parts). Not only is it set in the most complete fantasy world since LOTR, every character is individual, complex and brilliant, and the plot is heart racingly intricate without becoming sloppy or dull… or at least it hasn’t become sloppy and dull yet…This series always wins for how accessible it is. On almost every single commute since the summer I’ve seen someone with one of the books, mostly through scopin’ their kindles. I’ve seen uber nerds and middle aged women (not that middle aged women can’t be uber nerds…) reading them and I’d encourage anyone who loves a good romp to get stuck into Game of Thrones. The TV series was superb as well. Winter is coming, baby, winter is coming.
Up All Night Award

The Cry of the Go Away Bird by Andrea Eames.

Bit of a cheat as I read this in a day, rather than a night, but how could I not mention the gorgeousness that is Andrea Eames? This book, set in Zimbabwe in the early naughties, was both educational and moving, and I could not put it down. Simply but evocatively written the power of the subject matter is not hampered down by the emotions clearly running throughout.
Andrea was lovely enough to let N interview her, which you can read here, and my original review for For Books Sake is here. Her next book, The White Shadow is out in February and I’ve got a sneaking suspicion it’s going to be just as good!
Best Debut
Bear Down, Bear North by Melinda Moustakis
Simply one of the best written pieces of fiction I’ve ever help in my hands, and it is criminal how little press these this short story collection has had in this country; The Guardian haven’t even reviewed it for God’s sake! This book makes you feel cold. Every emotion it is possible to feel is there, along with beautiful description of landscape and a perfect sense of place. Melinda was also lovely enough (after I massively fangirled her after reviewing it for ForBooksSake) to do an interview with me, which you can read here. This woman deserves success, and should be forced into writing a full length novel set in Alaska. Buy it! Buy it now! 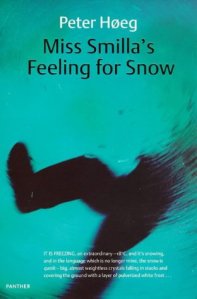 My ranging Scando-boner had a bit of cold water thrown on it mid-December when I finally got round to reading this Danish classic and Times book of the year. Didn’t get it. The first 100 pages were brilliant, beautifully written and with and instantly gripping mystery I could sink my teeth into. Then it all turned a bit, you know, wank.

It’s Smilla. She’s a douche. A self obsessed, whiny, ‘look at me, look at me’, wannabe emo immature douche. By page 250 I was screaming ‘YOU ARE 37 GET OVER YOURSELF’ at her. Oh, but her amazing mother left her alooooone and she was forced from Magical Greenland by her daddy and oh isn’t everything just dreadful.
Except, it isn’t. She fucks everything up by being ‘individual’, also know as ‘a knob’. She’s had countless opportunities to have a good life, but instead chooses to fuck about. Also, I DON’T CARE WHAT HAT YOU ARE WEARING SMILLA, NO ONE DOES.

Like Lisbeth Salander, this is a fantasy of a woman, not a real one, and the entire book suffered for it. I left it with 80 pages to go, with Smilla running around a ship, for no apparent reason, with the caveat that I had a brand new copy of Pride and Prejudice looking at me and I could no longer be arsed with this drivel.
Best Recommended Read
South Riding by Winifred Holtby

I loved the TV series, but would never have thought of reading the book, were it not recommended to me by so many people (thank you @Sewhipfolkie for the lend!). A million times better, more in depth and more revealing of a time, with characters that haven’t left me nearly a year later, this very nearly went for Discovery of the Year.
If you love strident female leads, and books set in The Past, read this. Then read Westwood by Stella Gibbons.
Worst Book of the Year
Hothouse Flower by Lucinda Riley.
This is what happens when you try to market Joanna Trollope to Kate Atkinson fans. This book made me gaaaaah at it so many times, and were it not for the one decent part of the back story with Cora in the 1930s and the fact that I was reading it for review I would have thrown it against the wall and had done with it. It is dross, badly written, endless, pointless dross. It also uses a racist paradigm as plot devices which is unforgivable in modern fiction. Thoughtless writing, how the hell this became a best seller is beyond me. Actually, no it isn’t, it’s the cover. Bloody marketing.
Another cracking year for reading, mostly due to the excellent and wonderful discoveries I’ve made through the book swaps and book clubs. Thank you to everyone for recommendations and donations and to lovely publishers and agents for sending me books!
Approximately 100 books read, most of them Not Shite. On to 2012!
Happy Reading
BookElf xxx
Advertisement

Incredible day!
Absolutely loving having my parents here. We have been art gallery visiting! @HepworthGallery in Wakefield, dinner @whiteswanleeds then a quick run around @LeedsArtGallery - wonderful to see the brick man returned!
Yorkshire sculpture park last month #YSP
#Allotment #Leeds
Look how awesome my corn looks!
#KirkstallAbbey 2 nights ago
%d bloggers like this: