This morning I came across this article on Packed Lunch ideas from Fictional Foods which instantly made me hungry and prompted me to try and remember my favourite fictional foods.

I always wanted to go to one of the midnight feasts at Malory Towers (@isfromupnorth – you with me?) – though I’d avoid the hard boiled eggs that Enid Blyton seemed to find an essential ingredient of all young peoples meals. And if Aunt Marilla (Anne of Green Gables) had ever offered to bake for me – I’d have jumped at the chance!

I’m pretty sure that it was a similarly aged book that had me try nettle tea for the first time (result – my nana apparently used to greatly enjoy it, me…not so much!) though I can’t for the life of me think what it was! And of course the bitter disappointment that I felt upon first tasting Turkish Delight – after reading about it in The Lion, the Witch and the Wardrobe – still pangs to this day.

A quick search on the internet lead me to Fiction Food – a website that is devoted to food stuffs found in books, comics, manga, tv and films – as well as Ficitonal Food – which appears to specialist in creating foods appropriate for particular fictional worlds – such as Game of Thrones, The Hunger Games (oooh, peeta’s cheese buns sounded good!) and Harry Potter (though I’m a bit like Hermione in that I’m not sure that I actually count the feasts – after all that was the (unpaid) work of Elves and not really something that I can actually replicate).

It’s probably important for me to point out now that I do NOT cook. Or bake. Nor have I ever demonstrated anything like a basic proficiency in the kitchen. However, I was so caught up in the world created by Fannie Flagg in Fried Green Tomatoes at the Whistle Stop Cafe that I’ve tried at least half of Sipsey’s recipes in the back of the book! 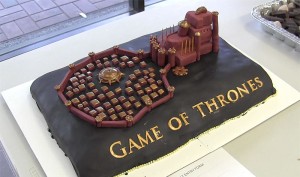 What are your favourite fictional foods? Have you actually tried to make them? Did it work?

Also – any fictional foods that you just LOATHE? Lembas bread (Lord of the Rings) doesn’t count – bland ain’t always bad you know! The brain and noodle soup from iZombie does qualify – it sounds pretty awful to me!! I was always equally torn with regards to Roald Dahl – some of it sounded wonderful – other bits sounded just HORRIFIC!

*Just asked himself – he got the tip to add sherry into omlettes from Happy Like Barnacles.