THE MAP OF TIME

An epic, ambitious and page-turning mystery that will appeal to fans of The Shadow of the Wind, Jonathan Strange and Mr Norrell and The Time Traveller’s Wife.

London, 1896. Andrew Harrington is young, wealthy and heartbroken. His lover Marie Kelly was murdered by Jack the Ripper and he longs to turn back the clock and save her.

Meanwhile, Claire Haggerty rails against the position of women in Victorian society. Forever being matched with men her family consider suitable, she yearns for a time when she can be free to love whom she choses.

But hidden in the attic of popular author – and noted scientific speculator – H.G. Wells is a machine that will change everything.

As their quests converge, it becomes clear that time is the problem – to escape it, to change it, might offer them the hope they need… 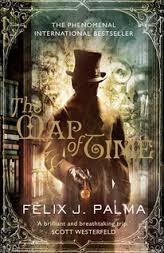 I always worry that if you read a book in translation it loses something from the original essence which is the story in the author’s native language. However, this book, in translation from Spanish is a complex, twisting yet very engaging “Fan Fiction” of H.G. Wells “The Time Machine” .

There are three strands to the story, one is the desire of a rich aristocratic son to prevent the murder (by going back in time) by Jack the Ripper of a prostitute with whom he has fallen in love. The second is the rejection by H.G. Wells of a penny bookstall science fiction story written by an entrepreneur, or that’s what he likes to call himself, and his subsequent revenge. And the third is the meeting, in a future world, of a young woman and whom she would like to believe is the victor in a devastating battle in the year 2000 between evil automatons and their former human masters.

There’s the written fantasy of time travel, which we all now know from H.G. Well’s book, there’s the desire to believe in time travel and how this can cause the boundary between the real and made up to be blurred, and there’s actual time travel. Mixed into this are murders, London gangland punishments and the great difference between the lifestyles of the rich and poor in late 19th CenturyLondon.

If you can manage to keep in your head the many twists and turns of the plot, which are found to all link together in the end, this is a satisfying and exciting read and one in which the story, mostly told from the point of view of the narrator, keeps offering surprises and happiness.