First published in 1940, the book is about Elizabeth Allen who is spoilt and selfish. When’s she’s sent away to boarding school she makes up her mind to be the naughtiest pupil there’s ever been! But Elizabeth soon finds out that being bad isn’t as simple as it seems …

Enid Blyton is one of the best-loved children’s authors with over 700 titles published. Aged 27, Enid married Hugh Pollock and moved to London. They had two children, and soon afterwards Enid wrote her first novel, The Adventures of the Wishing-Chair. Throughout the 40s and 50s, Enid wrote books at a colossal pace: adventure stories, mysteries, magical stories, farming stories, stories for younger children, and best-selling series like Malory Towers and Amelia Jane. She is the author of The Famous Five series, The Secret Seven series, The Wishing Chair series, Malory Towers, St Clare’s, The Magic Faraway Tree series, Amelia Jane stories and many more! Enid died in 1963. Her stories remain timeless classics, adored throughout the world. 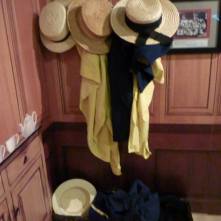 ‘Elizabeth is being sent to a boarding school by her parents because they are going away for a year or so and Miss Scott who is rather fed up with the little girl is resigning from her position as Elizabeth’s governess. Elizabeth has apparently been blessed with laughing blue eyes and intelligence and Miss Scott has remarked that she’s ‘Pretty, and Merry, and Rich’ but she’s also plain naughty.’  – The Enid Blyton society

A fantastic story about a determined little girl who is very spoilt. Taught at home by a governess and given everything she asks for Elizabeth, is a true spoilt brat. Always playing tricks on her governess, hence why she leaves. Her parents not understanding why she always has to be naughty decide to send her off to boarding school, to see if this will change the little girl. In protest Elizabeth starts acting good thinking her parents will change their mind, only for it to backfire.

“Well, Elizabeth, if you want to make things difficult for yourself, you’ll have to,” said Mother, getting up.”

Elizabeth is packed off to school like all boarding schools via train, and from the moment she arrives decides to show her true colours and connote being naughty in attempt to be sent home again. Not thinking no one will be there.

“I wonder where you got that idea from? I mean, the idea that it’s feeble to change your mind once it’s made up. That’s a wrong idea, you know. Make up your mind about things, by all means – but if something happens to show that you are wrong, then it is feeble not to change your mind, Elizabeth. Only the strongest people have the pluck to change their minds, and say so, if they see they have been wrong in their ideas.”

The story is quite comical, how Elizabeth to others appears to be a pretty little girl does her best to be noticed yet the others just think as her as spoilt and can’t understand her behaviour.

One of the parts in the story I did’t understand was where the children put all their spare money into a pot including birthday money and if anyone asked to buy something it was put to a vote. I mean it obviously was trying to teach the children how to share and work for things but what if you were not as rich as others. Even birthday presents weren’t safe. They even decided on the punishment! It led me to think of the Demon Headmaster of all things. But that’s my only grumble of the story.

I loved how one of the older girls enticed Elizabeth into making friends with another girl called Joan who was left behind by her parents. Although seen as a test and perhaps a challenge to Elizabeth it seems to bring out another side to Elizabeth and although doesn’t entirely stop her from being naughty, but she sees that it is not a sign of weakness to change one’s mind and worries about what will happen if she doesn’t stay on at school, what she would be losing.

‘They become friends and in the Enid Blyton way, friends help each other so Joan benefits and so does Elizabeth.’

Yet another great book about finding out who we are and what we have. Yes a bit deep, but I love it. I love how it shows how our behaviour can affect others and how much we can gain from friendship. This is a must for all kids.

2 thoughts on “Enid Blyton Challenge Book 10: The Naughtiest Girl in the School”