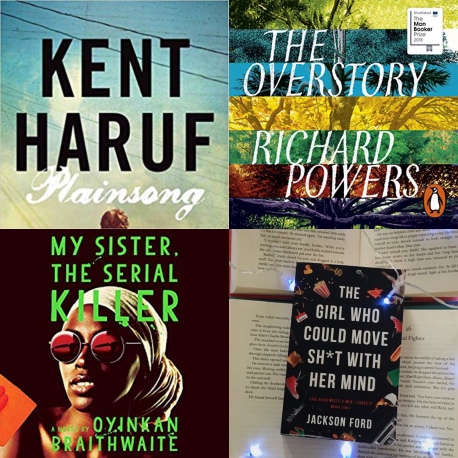 I’m a little stunned that we’re picking books for 2020…the future is now! And slightly less cool than I was expecting 😀

Anyhoo, we have our January books picked and I wanted to share them ASAP – partly to give the regulars a heads up as to what we’re reading for when, but also to attempt to entice anyone that is thinking of giving book clubbing a go next year.

I suppose it is crazy. I don’t know. I don’t even care. But that girl needs somebody . . . And you old solitary bastards need somebody too. Somebody or something besides an old red cow to care about and worry over.

Set in Kent Haruf’s fictional landscape of Holt County, Colorado, Plainsong is a story of simple lives told with extraordinary empathy. Tom Guthrie is struggling to bring up his two young sons alone and, in the same town, school girl Victoria Roubideaux is pregnant and homeless. Whilst Tom’s boys find their way forward without their mother, brothers Harold and Raymond McPheron – gentle, solitary, gruff and unpolished – agree to take Victoria in, unaware that their lives will change forever.

#LBCWSwan, we meet on the second Sunday of each month* at 6:30pm at the White Swan pub

Teagan Frost is having a hard time keeping it together. Sure, she’s got telekinetic powers – a skill that the government is all too happy to make use of, sending her on secret break-in missions that no ordinary human could carry out. But all she really wants to do is kick back, have a beer, and pretend she’s normal for once.

But then a body turns up at the site of her last job – murdered in a way that only someone like Teagan could have pulled off. She’s got 24 hours to clear her name – and it’s not just her life at stake. If she can’t unravel the conspiracy in time, her hometown of Los Angeles will be in the crosshairs of an underground battle that’s on the brink of exploding . . .

Full of imagination, wit and random sh*t flying through the air, this insane adventure from an irreverent new voice will blow your tiny mind.

#LBCHorsforth meet at 7:30pm at the Old Kings Arms, in Horsforth

The Overstory unfolds in concentric rings of interlocking fables that range from antebellum New York to the late twentieth-century Timber Wars of the Pacific Northwest and beyond:

An Air Force loadmaster in the Vietnam War is shot out of the sky, then saved by falling into a banyan.
An artist inherits a hundred years of photographic portraits, all of the same doomed American chestnut.
A hard-partying undergraduate in the late 1980s electrocutes herself, dies and is sent back into life by creatures of air and light.
A hearing- and speech-impaired scientist discovers that trees are communicating with one another.

These four, and five other strangers – each summoned in different ways by trees – are brought together in a last and violent stand to save the continent’s few remaining acres of virgin forest.

There is a world alongside ours – vast, slow, interconnected, resourceful, magnificently inventive and almost invisible to us. This is the story of a handful of people who learn how to see that world and who are drawn up into its unfolding catastrophe.

When Korede’s dinner is interrupted one night by a distress call from her sister, Ayoola, she knows what’s expected of her: bleach, rubber gloves, nerves of steel and a strong stomach. This’ll be the third boyfriend Ayoola’s dispatched in, quote, self-defence and the third mess that her lethal little sibling has left Korede to clear away. She should probably go to the police for the good of the menfolk of Nigeria, but she loves her sister and, as they say, family always comes first. Until, that is, Ayoola starts dating the doctor where Korede works as a nurse. Korede’s long been in love with him, and isn’t prepared to see him wind up with a knife in his back: but to save one would mean sacrificing the other…