THE SUMMER OF LIVING DANGEROUSLY 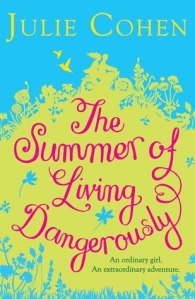 Alice Woodstock is a writer, or more precisely making her income from writing technical reviews of industrial products. She sees a job advert for guides at Eversley Hall, who spend the day being an character from the hall’s history and answering visitor’s questions. For Alice, the offers an escape, not just from her rather dull freelance job, but from her ex, who for some reason has decided to come back to the England from the States and move in again, despite knowing full well that Alice is barely on speaking terms.

Eversley Hall in 1814 is not just governed by the class system of upstairs and downstairs, and the social niceties of what is Jane Austen world, but by the owner, James Fitzwilliam’s, need to stick to what the history of the hall says is what actually happened to his ancestors. That is, until Alice gets involved and, by virtue of covering for a fellow servant girl’s fag break, decides to go off-script, with interesting results.

Now, this novel is part contemporary suburban metropolitan, and part Pride and Prejudice, with some quirky humour as well, but there are some very unexpected really quite emotional chapters relating to Alice’s past which reveal why she split up from her ex, and why she is running away from reality.

Well written for the most part – there’s just one or two bits near the end where it seems to jump and miss a scene, but enjoyable.