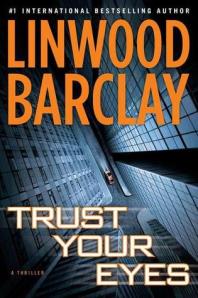 Trust your eyes’ by Linwood Barcley. 14/8

Thomas Kilbride is a map-obsessed schizophrenic so affected that he rarely leaves the self-imposed bastion of his bedroom. But with a computer program called Whirl360.com, he travels the world while never stepping out the door. That is until he sees something in a street view of downtown New York City. Thomas’s keen eyes have detected an image in a window…an image that looks like a woman being murdered.
Thomas’s brother, Ray, takes care of him, cooking for him, dealing with the outside world on his behalf, and listening to his intricate and increasingly paranoid theories. When Thomas tells Ray what he has seen, Ray humors him with a half-hearted investigation. But Ray soon realizes he and his brother have stumbled onto a deadly conspiracy.
And now they are in the crosshairs..

After spending his formative years helping run a cottage resort and trailer park after his father died when he was 16, Linwood Barclay got his first newspaper job at the Peterborough Examiner, a small Ontario daily. In 1981, he joined the Toronto Star, Canada’s largest circulation newspaper.

He held such positions as assistant city editor, chief copy editor, news editor, and Life section editor, before becoming the paper’s humour columnist in 1993. He was one of the paper’s most popular columnists before retiring from the position in 2008 to work exclusively on books.

Between 1996 and 2000 be published four non-fiction books, including a memoir about growing up in cottage country, Last Resort, which was shortlisted for the Stephen Leacock Medal for Humour.

In 2004, he launched his mystery series about an anxiety-ridden, know-it-all, pain-in-the-butt father by the name of Zack Walker. Bad Move, the first book, was followed by three more Zack Walker thrillers: Bad Guys, Lone Wolf, and Stone Rain.

His first standalone thriller, No Time for Goodbye, was published in 2007 to critical acclaim and great international success. It has been sold around the world and is being translated into nearly two dozen languages. In Germany alone it has sold half a million copies. His second standalone, Too Close to Home, is coming out in the fall of 2008.

Linwood was born in the United States but moved to Canada just before turning four years old when his father, a commercial artist whose illustrations of cars appeared in Life, Look and Saturday Evening Post (before photography took over), accepted a position with an advertising agency north of the border.

Linwood, who obtained an Honours B.A. in English at Trent University, in Peterborough, Ontario, was fortunate to have some very fine mentors; in particular, the celebrated Canadian author Margaret Laurence, whom Linwood first met when she served as writer-in-residence at Trent, and Kenneth Millar, who, under the name Ross Macdonald, wrote the acclaimed series of mystery novels featuring detective Lew Archer.

It was at Trent that he met the woman who would become his wife. He and Neetha, who teaches kindergarten, have been married for more than 30 years. They have two children, Spencer and Paige. -Goodreads