Huge thanks as ever to our wonderful Superstar Guest star @AlisonNeale for providing us with this terrific write up.
BLURB

It’s the 23rd Century and at age 21… your life is over! Logan-6 has been trained to kill; born and bred from conception to be the best of the best. But his time is short and before his life ends he’s got one final mission: Find and destroy Sanctuary, a fabled haven for those that chose to defy the system.

But when Logan meets and falls in love with Jessica, he begins to question the very system he swore to protect and soon they’re both running for their lives. When Last Day comes, will you lie down and die… or run! 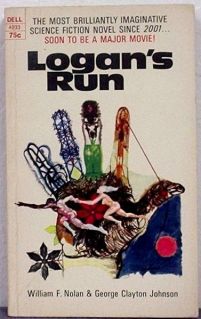 Those who had seen it felt that the film had taken the best bits of the book, and while loyal in concept, retained little of the story line.
So to begin, let’s have a little comparison:
In the book people died at 21: at this age one is fairly clueless about the world (in a nice way), less likely to have formed a major attachment to another person, and would thus perhaps evoke less sympathy from the reader, despite the pure youth element. However, knowing of one’s imminent demise, one would live life faster, so perhaps this is flawed logic.
Meanwhile, in the film one died at 30: general consensus was that by 30 we wouldn’t have the energy left to run.
The book was pre-apocalyptic: there are few references to anything wrong, except the phrase ‘the thinker was self-repairing, or supposed to be’, and some further comments at the end. The film was rather different here: post-apocalyptic, as the computer has already malfunctioned.
While it might not have felt this way when the film first came out, bookclubbers felt that the casting of Michael Yorke turned them off the film. It was also suggested that the age limit was raised as he wouldn’t be a realistic 21 year-old. Harsh, but fair.
On the subject of antihero vs. hero, in the book some readers were never quite sure if Logan would go through with destroying Sanctuary, as he was genuinely at the end of his own life and seemed to fluctuate in his sympathies. In the film, however, Logan was more certainly an antihero, having given up precious years of his life to go on this mission.
The key comparison between formats, however, was felt to be the book’s sad lack of Peter Ustinov and his cats.
Concentrating on the book, now (it is a book club, after all!), fundamentally the story’s main premise was flawed: killing everyone at 21 doesn’t solve the overpopulation problem, and why would anyone ever have chosen to do this? Also, there seemed to be nothing worth living for in this world, so why wouldn’t you run earlier? ‘Everything comes to us on a platter – man’s got nothing left to live for’, which ties in with the noticeable lack of the arts, while they all seem to travel and practice dangerous sports. One bookclubber wanted it stressed that as opposed to wandering off topic, she made an excellent point here about the Scottish Parliament considering 16 year-olds getting the vote, and how unwise this was in light of the book’s subject matter.
We all concurred… and ate more chips.
One bookclubber expressed a liking for this era of sci-fi writing, when stories contrasted with the relative prosperity of the day. For those not familiar with the type, the bells-and-whistles ending involving a Real Spaceship was a surprise; for others, not so much. (The discussion briefly diverted to how the spaceship would be launched without everyone knowing about its existence; it was decided that this happened at night. Clever, innit?)
The ending was described as ‘myopic’, with some people then rapidly scribbling notes hoping that no one noticed that they couldn’t recall what this meant until they got home to the dictionary, while others suggested that this ‘short- sightedness/lack of imagination’ [phew!] applied throughout the book. While the early execution idea was certainly original, the book was otherwise strangely lacking in detail.
How did the world/system function?
What did people do all day?
The novel was felt to be a series of ‘missions’, and needed more ‘fleshing out’. The length, though, was deemed appropriate to the one-day timeline, and one bookclubber pointed out that given the tale was told from Logan’s point of view, it would have been awkward to break the rapid escape storyline to insert more description.
I’ve not been able to confirm it through online sources, but we all generally agreed with one bookclubber’s suggestion that the novel had been written rapidly for a fairly ‘pulp’ market.
Given that both authors are still listed as ‘best known’ for this book and its various sequels, prequels and spinoffs, this seems a fairly solid theory. It was also pointed out that the book was essentially a thriller that just happened to be set in a dystopian, sci-fi world.
We were faced with our first antihero in Dystopian Bookclub, but readers discussed their indifference to the characters. No one was really rooting for Logan’s success, of course, which didn’t help us like him any the more. However, the character of Jessica was hearteningly appealing – not just some lycra-clad sex object, for once. Hurrah!
The book felt British, many of us agreed, yet was written by a US author and set in the USA.
It reminded more than one of us of Brave New World. The locations were widespread and diverse, almost feeling like those computer game ‘missions’ again.
The conclusion, then? The book/film is fun, it’s a good read/watch and does what it says on the tin, but when you start to pull at it, it falls apart. After all, there’s probably a reason the book is out of print.
We did like the idea of seeing the first old person… oh, and the feral children. We liked the feral children…

Find fellow members on twitter by searching for #LBCGiraffe

Follow @GiraffeTweet for details on the deliciousables and their projects nationwide (which this month include an awesome #GiraffesCantDance giveaway!).

Let me know your thoughts by either tweeting me @LeedsBookClub, commenting below or emailing me at leedsbookclub@gmail.com