On those rare occasions when I have an evening set aside to just immerse myself in a good book, I find myself choosing particular music to accompany me. Often the album du jour just won’t do. Certain albums do more than just ‘set the mood’, they sort of blend with the book involved, often with the two becoming indelibly linked.Music – when reading is involved – shouldn’t be distracting. It shouldn’t be overpowering. No matter how good the artist or song, the music must be a secondary consideration. Good music has the capacity to enthrall or enhance, depending on the situation. There’s nothing worse than being dragged back to the real world because the musical mood has shifted from perfect to awful in under three seconds.There are no hard and fast rules when it comes to listening to read-along music. How could there be, when listening to music is so personal an experience? A mate I know will only read to classical music. Another won’t listen to music at all, to avoid any external associations or influences. I had one teacher who couldn’t understand how anyone could read while listening to music with lyrics. ‘The stories clash. The. Stories. Clash’ was her increasingly loud and occasionally shrill assessment, though non-lyrical pieces were fine.

Me? While I am interested by the debate, I don’t really have a stance on it. I don’t care if it’s classical, pop, rock, folk, punk, rap, country, bluegrass, folky-rock, gothy-pop, folky punk as long as it suits my mood and the world I’m occupying at that moment in time. I was shocked to discover that Green Day provided good Austen soundtrack (seriously, listen to Basket case while Marianne is having her whole ‘woe is me, I’m the only person in the world who feels anything in the whole wide world’ whinge or Good Riddance during Persuasion when the Captain leaves Anne at the beginning) or that American Gods could be best read while listening to Emmy Lou Harris! Or that country and scifi go hand in hand for me…since Firefly…
Taste is a weird and wonderful mystery!

It’s just as funny how some music doesn’t work along side the written word. Leonard Cohen and Bob Dylan are amazing song writer story tellers. Perhaps it is this very descriptive narrative structure that puts me off reading alongside them. Even on the bus, if I shuffle to a track by either of these gents, I end up staring out the window rather then reading for the duration. Kimya Dawson too now I think of it (which is additionally odd, as I CAN read throughout the Juno soundtrack!). Radiohead, despite being a terrific band, don’t take on other emotional characteristics in my experience than the music offers. I’m more likely to view the book through Radiohead “headphones”, than I am to alter my initial perceptions and responses to the music.…

And moods do change, so what was appropriate yesterday, might not be tomorrow.
Below I’ve included some general music that I think enhances a reading trance  session. On ones with an especial emotional connection, I provide a little more detail.

Initially introduced to this French duo via the 10 Things I Hate About You soundtrack. Providing perfectly etherial and magical mood music, Air manage to be both haunting in places, and artificially cheerful in others.

I enjoy listening to this when I’m reading deep and serious books – in fact, I’ve pulled this album out for two #BookerChallenge reads recently.

For the Birds Anything by – The Frames

Glen Hansard is one of those guys who was pretty great on a guitar as a kid, but some 20 years of solid writing, preforming and rocking later – is a LEGEND now!
You might know him as Outspan from the Commitments (but for the love of God don’t tell him! Apparently he has decided that role was a mistake – distracting him from music), or as the incredible lead singer for the Frames, as half of The Swell Sessions, or as that busker from Once – which won an Oscar for the song he wrote and sang!
He was also featured on The Simpsons!
Any album for any book. No, seriously. That’s how amazing I think the Frames are.
Live Through This/Celebrity Skin – Hole 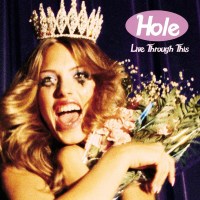 Though I had heard bits and pieces before, I really became addicted to this band during my Leaving Certificate examinations (A Level equivalents). We had a perfect routine for those most exhausting and stressful of weeks while exams were being sat. After each one, my mum would pick me up from the school, pop the cassette in (though Hole wouldn’t exactly be my Leonard Cohen loving parent’s first choice), and give me a few moments to relax before asking how the day had been. By the 4th song, we’d both be singing along, and heaps more relaxed.

Hole are such a divisive group. So many times, I’ve had a song on in the background which someone likes, till they realise who it is. Courtney Love’s larger than life personality and her apparent inability to avoid both drama and tragedy overpowers her music. The controversies that roll off her like water off a duck leave people with strong opinions one way or another, with Hole – the group – often baring the brunt.

Live Through This is the better grunge album (heck, I’m a fan, and I’m convinced that’s as it was mostly written by Kurt Cobain), and demonstrates a group growing confident as to their place in their world, unafraid to tackle the big and the awful. Celebrity Skin – Hole’s final* album –  is more slickly produced, definitely angled to a more mainstream audience, and possibly over polished (cough…Nevermind

With the exams behind me, I started reading practically anything I could lay my hands on. After months of complete and total fixation on tests, I NEEDED some fiction. Returning to an old favourite, I re-read the Pegasus series by Anne McCaffrey (To Ride Pegasus, Pegasus in Flight and Pegasus in Space – precursors to her better known Rowan series). These three books chart the rise and rise of Talents – people who evolve powers and abilities none can explain. First read when I was about 14years of age, the themes of alienation, difference and hope still inspire reflection in me. Besides, her works were among the first SF that I found for myself as a youngling, so I will always have a soft spot in my heart, and space on my bookshelf for these.
As the first book consists of short stories, the fast pace of the songs fits with the tone. And as each story and subsequent book packs as much exploration of humanity and expectations for those with differing abilities as it can, the songs provide a pulsating soundtrack that just works for me! Where possible, I play Doll Parts as I start each book, and Miss World as I finish. There is a story in the first of the books ‘A Bridle for Pegasus’ that just fits Asking for it to a t!
*Nobody’s Daughter was released in 2010 and features none of the original band members but Courtney Love. So, technically a Hole album…but not really… if you know what I mean…
Grace – Jeff Buckley

I was actually in two minds about including this album, as it has become linked in my mind with the passing of my grandmother. Around that time, I had been reading The Diary of Anne Frank for the 27500th time. The tragedy I was experiencing; coupled with the book and the premature death of such a talented musician; somehow brought me a sense of perspective and not a little peace. And although I can never interact with either without the association of these past events, the passage of time has only heightened my appreciation.

Jeff Buckley had an astounding range vocally, and was in total control of his instrument. A perfectionist, he hated to release anything without feeling that it was as close to the best as it could be. I think that this intensity shines through in every track. Although I think his (to my mind definitive) version of Hallelujah is hailed near universally, it is Last Goodbye that I time with certain books. That song has the depth and capacity to leave me howling in despair, or ready to face the world anew, depending on what else is happening around me.

I can’t possibly do justice to The Diary of Anne Frank and the three versions released during my lifetime alone in this piece. Suffice to say, I have loved this book for two thirds of my life. It will never be irrelevant to me.

Anne and her family are real, living, breathing people between these pages, and a moment in time – albeit one of the worst humanity has ever inflicted upon itself – is captured and described in evocative and universal terms. Anne was an extraordinary writer, living in extraordinary times. I – like everyone else who has read this diary – can’t help but wonder what she might have achieved had she lived.

The only downside to mentioning it here, is that I now really want to read it again. I have to stop doing this to myself!

Right, this post ended up being longer than expected, so I shall draw to a close now. Please let me know what you’re thinking by sharing your thoughts with us in the comments section, or on twitter.

On twitter, the following albums/artists have been recommended to read along to:
Regina Spektor – in the bath with a glass of wine (clearly, @Carrie_l_hall is a soul sister of mine)

Zero 7 – The Garden was the offering of @Zoe28, who must be both cool and mellow, if music tastes are any indication!

Belle & Sebastian – Put the book back on the shelf (don’t agree with the sentiment but the music is lovely, as suggested by @SimonRowbotham!)

Sugar – Copper Blue – used by @NickRowan27 as a revision tool. After all, an album can’t distract when you know it inside and out!!

Moby – Play – provided @SaraTeresaPhoto with her studying soundtrack at university, and she still experiences french conjugation flashbacks when she hears any of the tracks! This actually makes her lucky. Everytime I hear Moby, an advert appears in my head 😦

On the other hand, book clubbers @MonkeySon and @Meulop prefer lyric-less music, or nowt at all, to avoid distracting them from their books!

2 thoughts on “Music To Read Books By”