Ok, so this isn’t really a blog post, per se…but I hope that you find it interesting none the less!
As I am still on my poetry kick, I’ve been looking up poems I first discovered as a kid.

Here are a few of my favourites.

I’ll start with a quickie. CS Lewis, from The Voyage of the Dawn Treader, book five of the Narnia series. 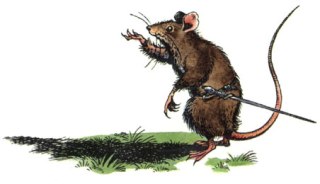 Where sky and water meet,
Where the waves grow sweet,
Doubt not, Reepicheep,
To find all you seek,
There is the utter East.

It’s almost impossible for me to even think about poetry without immediately jumping to Roald Dahl. His three (?) books of poems were the BEST christmas presents ever!

As soon as Wolf began to feel
That he would like a decent meal,
He went and knocked on Grandma’s door.
When Grandma opened it, she saw
The sharp white teeth, the horrid grin,
And Wolfie said, “May I come in?”
Poor Grandmamma was terrified,
“He’s going to eat me up!” she cried.

And she was absolutely right.
He ate her up in one big bite.
But Grandmamma was small and tough,
And Wolfie wailed, “That’s not enough!
I haven’t yet begun to feel
That I have had a decent meal!”
He ran around the kitchen yelping,
“I’ve got to have a second helping!”
Then added with a frightful leer,
“I’m therefore going to wait right here
Till Little Miss Red Riding Hood
Comes home from walking in the wood.”
He quickly put on Grandma’s clothes,
(Of course he hadn’t eaten those).
He dressed himself in coat and hat.
He put on shoes, and after that
He even brushed and curled his hair,
Then sat himself in Grandma’s chair.
In came the little girl in red.
She stopped. She stared. And then she said,

“What great big ears you have, Grandma.”
“All the better to hear you with,” the Wolf replied.
“What great big eyes you have, Grandma.”
said Little Red Riding Hood.
“All the better to see you with,” the Wolf replied.
He sat there watching her and smiled.
He thought, I’m going to eat this child.
Compared with her old Grandmamma
She’s going to taste like caviar.

Then Little Red Riding Hood said, “But Grandma,
what a lovely great big furry coat you have on.”

“That’s wrong!” cried Wolf. “Have you forgot
To tell me what BIG TEETH I’ve got?
Ah well, no matter what you say,
I’m going to eat you anyway.”
The small girl smiles. One eyelid flickers.
She whips a pistol from her knickers.
She aims it at the creature’s head
And bang bang bang, she shoots him dead.
A few weeks later, in the wood,
I came across Miss Riding Hood.
But what a change! No cloak of red,
No silly hood upon her head.
She said, “Hello, and do please note
My lovely furry wolfskin coat.”

And I wouldn’t be me if I didn’t include a Lewis Carroll classic!

“In my youth,” Father William replied to his son,
“I feared it might injure the brain;
But, now that I’m perfectly sure I have none,
Why, I do it again and again.”
“You are old,” said the youth, ” as I mentioned before,
And have grown most uncommonly fat;
Yet you turned a back somersault in at the door-
Pray, what is the reason of that?”

“In my youth,” said the sage, as he shook his grey locks,
“I kept all my limbs very supple
By the use of this ointment-one shilling the box-
Allow me to sell you a couple?”
“You are old,” said the youth, ” and your jaws are too weak
For anything tougher than suet;
Yet you finished the goose, with the bones and the back-
Pray, how did you manage to do it?” 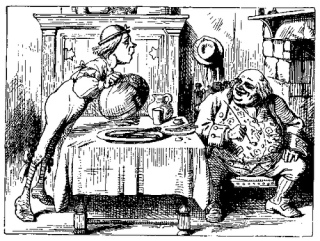 “In my youth,” said his father, “I took to the law,
And argued each case with my wife;
And the muscular strength, which it gave to my jaw,
Has lasted the rest of my life.”
“You are old,” said the youth, “one would hardly suppose
That your eye was steady as ever;
Yet, you balanced an eel on the end of your nose-
What made you so awfully clever?”

“I have answered three questions, and that is enough,”
Said his father. “Don’t give yourself airs!
Do you think I can listen all day to such stuff?
Be off, or I’ll kick you downstairs!”

I’m certain that everyone alive is familiar with this one!

One we learned in music class and sang as a round, believe it or not. Up until this moment, I had never known that it was written by Hilaire Belloc

The Vulture
The Vulture eats between his meals
And that’s the reason why
He very, very rarely feels
As well as you and I.
His eye is dull, his head is bald,
His neck is growing thinner.
Oh! what a lesson for us all
To only eat at dinner!

Of all the poems in all the children’s books in all the world, this is the one that impacts me even now. I’m instantly transported to a quiet still forrest, green and warm but devoid of birdsong; with deep dark pools all around me – each one a portal to a wondrous world, more intricate than I can even imagine.

Written by the inimitable CS Lewis in The Magician’s Nephew, first of the enchanting Narnia series.

Strike the bell and bide the danger,

or wonder, till it drives you mad,

what would have followed if you had…