Desperate Mary Grace Winters knew the only way to save herself and her child from her abusive husband was to stage their deaths. Now all that remains of her former life is at the bottom of a lake.

As Caroline Stewart, Mary Grace has almost forgotten the nightmare she left behind nine years ago. Slowly she has learned to believe that her new life, and new identity, is here to stay.

Then her husband uncovers her hidden trail. Step by step he’s closing in on her and everyone she loves. Now Caroline must decide whether to flee again or whether the time has come to stay and fight.. 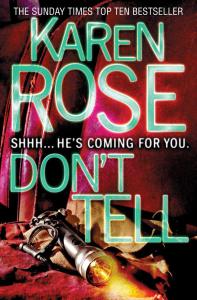 This was an event we were all looking forward to. I read it and had …opinions. A couple of others also had…opinions. And the reader that picked the book did so because she had…opinions.

We knew we were in for a good chat.

The first thing that came up was that it clearly showed it was Rose’s first book. We found it cartoony with stereotype characters and a plot that has been over used many times before. We didn’t find it to have a lot of originality although one of our group has read several more books and assures us Rose gets better and more original and you can see her progression as a writer as the books continue. It was also surprising that based on all the above Rose had re-written the storyline several times before it was sent to a publishers.

One of the reasons for picking the book was to be able to discuss women crime writers and how they are often bracketed as romantic suspense writers instead. We compared Rose to James Patterson whose characters are always falling in love and being smoochy but are clearly labelled crime writers although with Patterson his females always end  up dead. With this book it doesn’t seem to know what it is – suspense or romance. It’s labelled romance but the storyline is about domestic abuse a subject that did not sit well with any of the group. We found so many of the characters to be unlikable as well.

One reader did not like the romantic element of the book stating and I quote: ‘too much kissy kissy’. This seems to be a common argument on Goodreads too. We did though go back to Patterson who has a very similar level of romance and sex scenes but is not picked up on for it. We also discussed how Rose follows a similar pattern to dark fantasy writers (a subject that came under much scrutiny) in taking minor characters from one book and making them major players of the next one.

Overall we found the book difficult to read as we couldn’t get into the flow. Also, it was boring and frustrating. One reader said it was a mess. There were no redeeming qualities. It was soap-opera-esque and a bit too real life.

Told you we had opinions!

SCORE – Nora Roberts does it better

The Pub can be contacted on @CrowdofFavours

And feel free to let us know your thoughts using #LBCOutlaws