THE CHAOS OF STARS

Isadora’s family is seriously screwed up—which comes with the territory when you’re the human daughter of the Egyptian gods Isis and Osiris.

Isadora is tired of her immortal relatives and their ancient mythological drama, so when she gets the chance to move to California with her brother, she jumps on it.

But her new life comes with plenty of its own dramatic—and dangerous—complications . . . and Isadora quickly learns there’s no such thing as a clean break from family. 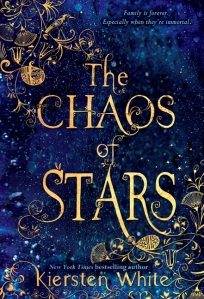 Our last meeting for 2015 and it was SUCH a laugh. So much so that I’ve committed not only to a Christmas Read-a-Long, but also a Christmas party (details will be posted on the blog when I’ve…you know…arranged them).

It was even better because the book just didn’t work for us and we as we were all of a mind; we could indulge our ranty selves. OK, that was just me, but we all of us just let it all out.

On the plus side; this is a surprisingly quick read – most of us read it in one or two sessions. It’s also a  page turner with only one member deciding not to finish it. It is also NOT the start of a trilogy. And for most of us, that was very good news.  I noted that it might be a good introductory book for YA who don’t enjoy reading, though this was countered*.

The dream sequences were interesting. I for one could have used more dreams and more familial history.

Another book clubber noted that the author had hoped to explore that period when teenagers learn that their parents are fallible; to articulate the conflicting emotions that can arise. Which is laudable. Good intentions and all.

Oh and there was no genuine stalking behaviour across the book. At no point did the primary male character follow the protagonist, or break into her bedroom, or restrain her. This was good. Seriously, as a book club; we’ve read quite a bit of YA fiction and to say we’ve been unimpressed by the prevalence of stalking as a POSITIVE undersells it somewhat. For the most part, characters interacted with one another as peers which would have been refreshing had it been better executed.

On the other hand…the reason that this was such a quick read was because the language was very basic. There was nothing challenging whatsoever in terms of this book.

As a book club, we’ve encountered quite a few books based on ancient myths. Perhaps the best received of these was American Gods by Neil Gaiman, closely followed by The Song of Achilles by Madelaine Miller. Many of us had also read one or the other of the Joanne Harris mythical books (Rune Marks and the Gospel of Loki). We all felt that this is a particularly fertile genera of fiction at the moment and that – at their essence – they can be assessed by how well portrayed the pantheons of Gods are and well developed the characters are.

We felt like this book was on very solid ground as a concept. Egypt – long a fascination for those of us in the Western World – has gone through a period of immense political and social upheaval. That’s before you take into account that Egypt is now predominantly Muslim and the fascinating intersections that could have been included. At every level, we thought that this book demonstrated a considerable lack of sensitivity in failing to even acknowledge the country that the book ostensibly opens in. Without any grounding or cultural exploration; the setting and nationality felt – at best – underdeveloped and tokenistic and – at worst – completely exploitative.

Regarding how the gods are portrayed; the primary character refers to her brother as Whore-Us the entire time. That’s one of the more mature depictions.

The misfires just kept on coming. With Egyptian and Greek Gods interacting, one might have expected a huge cultural clash or exchange or ANYTHING but – aside from increasingly stereotypical and one-dimensional portrayals – no; for some reason we were denied this interesting avenue. Instead, every conclusion reached was one predicted by us within the first few chapters. Not a single unexpected event, line of dialogue or act came as a surprise to any of us.

I don’t know anything about the author. This could have been a culture that she genuinely feels a connection to, but sadly that didn’t translate onto the page. It felt like the plot was all pre-set and the culture determined later and written in afterwards. Everything about this is homogeneous, not based in any sort of specific culture. At one point a reference is made to an ancient Egyptian language. It’s not even named, which just came across as both disrespectful and lazy writing. At another point – after the plot pointlessly pulls Isodora out of Egypt and sends her to San Francisco FOR NO REAL REASON WHATSOEVER – a character named Taylor comments to her that she looks as though pulled out of an exhibition and how Taylor wishes that she had a culture. We settled on the phrase othering and fetishizing that to boot over outright racism.

Isadora is beyond flimsy as a character. It is possible to have characters that – through no fault of their own – are oblivious to what is going on around them. We didn’t think that was the case here. Isodora is a character that it was difficult to made anything of. Her lack of maturity, inability to interact with her family in an honest or open way and selfishness might have felt like a realistic portrayal of a teenager if it weren’t coupled with an arrogant fatalism, utter entitlement and not-very-brightness. She never really sees what’s going on around her which was irritating as most of us figured out the Big Bad on the page that they were introduced. All together though, she is a pill.

One of the book clubbers positioned that Isadora’s parents might not have been well developed characters because Isadora never truly understood their motives. Others felt that the clubber was searching for a nuance that the writing did not suggest likely.

And for the record; museums – especially ones with famous priceless Egyptian artifacts arriving – don’t give keys to 16 year olds. Ever. And they don’t hold exhibitions like that either.

At least one of us felt that if she had read it at 13 years, she’d have enjoyed it. The thing is; I know that this reads harsh. We were harsh, but we were also genuinely frustrated. There were so many potentially great ideas briefly brought up and then discarded – many of them would have made really good tales. And as I mentioned above, we do actually read a lot of books written for younger readers (because we clearly do HUGE amounts of research for book club, many of us don’t realise that it’s YA until we’ve started it) and we take that into account when it comes to scoring. Also, we have an inherent respect for anyone who puts pen to page and actually creates something – we always have. That might not have been so clear in the write up but in person we did acknowledge that a few times (and we were in high spirits and good moods – all coming from a good place).

This isn’t an ‘evil’ book; it’s not even a terrible one. It’s merely bland. A beach read that you pick up, finish and forget all in a day.

*It was countered by saying that foisting this book on a YA might convince them never to read another book again. Which is harsh. But probably fair.

The Pub can be contacted on @WhiteSwanLeeds

And feel free to let us know your thoughts using #LBCWSwan!