A mate of mine dropped me an email last week letting me know that I had sent her reviews of the Black Magicians’s Trilogy way back in 2009.

These reviews actually predate the book club (I think) and will be posted under the email receipt date in a few weeks.

Despite every impulse within me, I won’t be editing these reviews at all, except for basic tidy up to follow the usual LBC review format.  I’ve even left in the infuriating oxford commas that I now avoid like the plague!!

“You want to know the truth.”

Sonea has learned much since she was but a penniless urchin possessing an awesome untapped ability. She has earned the grudging respect of her fellow novices and a place in theMagicians’ Guild. But there is much she wishes she had never learned—what she witnessed, for example, in the underground chamber of the mysterious High Lord Akkarin . . . and the knowledge that the Guild is being observed closely by an ancient fearsome enemy.

Still, she dares not ignore the terrifying truths the High Lord would share with her, even though she fears it may be base trickery, a scheme to use her astonishing powers to accomplish his dark aims. For Sonea knows her future is in his hands—and that only in the shadows will she achieve true greatness . . . if she survives. 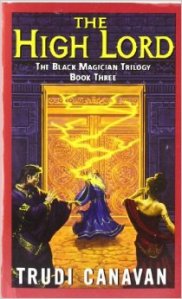 Wow O wow O wow…did this ever not end up in the place that I thought it was going to!!!The book that makes the trilogy – the best of all; the biggest of all and the finale.
At times, this was an entirely frustrating read. For one thing, just as the whole school thing skips forward a year and gets interesting; it’s mixed with the wanderings of a not-entirely aimless wizard intent on digging up the past, specifically Akkarin’s.
I mean the insights into why the High Lord is such a sod are really really interesting, and your mind keeps trying to figure out ways to piece the final pieces together. But they always come at the most pivotal moments within the main plot – and when you do get back to the primary story there is an entirely plausible reason why you are not right back at the action – grrrr frustrating!!And its a big book, even for me. I knew that I couldn’t read it in one go, and with work and everything…
Well I have to read it again. I did a lot of speed reading and missed vital details along the way (though we never do find out about the third gem…never gets answered…love it).This book does so much – and like I said, its a biggie, but a goodie – for me I found that it divided into thirds.
The first – Sonea IS learning more about the magicks and the High Lord.
The second – working in the dark.
the third…well, it is a fantasy novel – its the big reveal/fight/resolution.And romance.

But not in a ‘oh-god-a-woman-writing-sci-fi/fantasy’ way. It’s understated and all the more poignant, romantic and satisfying for being so (though I have a slight ick factor with the whole ‘he was her teacher’ thing). And the ending…unforgettable.

Mind you, I’m not sure I’ll ever forgive her (Trudi Canavan). I’m reading the first book of her next series, and if it ends in a way that upsets me again three days later…I’m moving onto more Disney style books 🙂

2 thoughts on “From the Vaults – The High Lord Review”