A mate of mine dropped me an email last week letting me know that I had sent her reviews of the Black Magicians’s Trilogy way back in 2009.

These reviews actually predate the book club (I think) and will be posted under the email receipt date in a few weeks.

Despite every impulse within me, I won’t be editing these reviews at all, except for basic tidy up to follow the usual LBC review format.  I’ve even left in the infuriating oxford commas that I now avoid like the plague!!

Each year the magicians of Imardin gather to purge the city streets of beggars, urchins and miscreants. Masters of the disciplines of magic, they know that no one can oppose them. But their protective shield is not as impenetrable as they believe.

As the mob is herded from the city, Sonea, a young street girl, furious at the authorities’ treatment of her family and friends, hurls a stone at the shield, putting all of her rage behind it. To the amazement of all who watch, there is a flash of blue light and the stone passes straight through the barrier and cracks a magican on the temple, rendering him unconscious.

After five hundred years of order, the guild’s worst fear has been realised – an untrained magician is loose on the streets. She must be found, and quickly, before her uncontrolled powers unleash forces that will destroy both her, and the city that is her home. 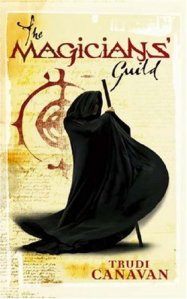 So a friend lent me this to read, promising that I’d become as hooked on the series as she was!!
I could completely see why she’d think so
– strong female characters – CHECK
– supernaturally / sci-fi orientated – CHECK
– drama and intrigue all the way – CHECKAnd yet, as I read, I became really depressed. It’s not that the idea isn’t great – it is and its not that I didn’t find the story intriguing, well paced and thought provoking – I did.
But I didn’t enjoy it.
I didn’t think that the writing was really up to scratch, and although I loved the story line I couldn’t help thinking that it was so unfair that all the books I would have loved as a young adult were written when I was too old to appreciate them. (LBC Present date note – Oh the pomposity of it all)Again, don’t get me wrong, the subject matter was not at fault. I just felt like it was written for a younger me. One who wouldn’t have noticed the occasionally repeated phrase or language. And the oft convenient plot twists established early in the story that were not as subtle as they thought they were.
the ‘fessing up
So, I kind of dreaded facing my friend. How awful to say that the book was a bit…bland …a bit juvenile. What sort of a pretentious twerp does that make me?!?!Ahem, anyhoo, she took it remarkably well. She shrugged, said something like “yeah i thought that too but I’ve the whole series. Here, read the next one.””No” said I.”No really, “she replied “it’s worth it.”

“I said read it!” She was clearly losing patience with me.

Meekly I answered “well, OK, I mean…was always going to…never leave a series unread and all that…”

So…see you at the next review…

2 thoughts on “From the Vaults – The Magician’s Guild Review”