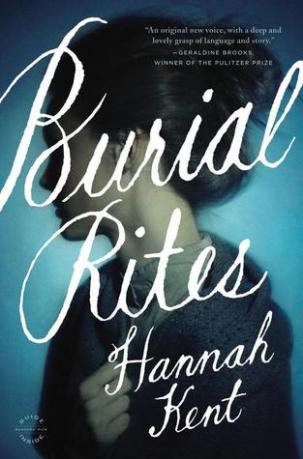 A brilliant literary debut, inspired by a true story: the final days of a young woman accused of murder in Iceland in 1829. Set against Iceland’s stark landscape, Hannah Kent brings to vivid life the story of Agnes, who, charged with the brutal murder of her former master, is sent to an isolated farm to await execution. Horrified at the prospect of housing a convicted murderer, the family at first avoids Agnes. Only Tóti, a priest Agnes has mysteriously chosen to be her spiritual guardian, seeks to understand her. But as Agnes’s death looms, the farmer’s wife and their daughters learn there is another side to the sensational story they’ve heard. Riveting and rich with lyricism, BURIAL RITES evokes a dramatic existence in a distant time and place, and asks the question, how can one woman hope to endure when her life depends upon the stories told by others?

Hannah Kent won the 2011 Writing Australia Unpublished Manuscript Award for her manuscript, Burial Rites, and is currently mentored by Geraldine Brooks. She is the co-founder and deputy editor of Australian literary journal Kill Your Darlings, and teaches Creative Writing and English at Flinders University, where she is also completing her PhD.

In 2011 she was a judge of Melbourne University/The Australian Centre’s Peter Blazey Fellowship for Life Writing. Her creative and critical writing has appeared in The Big Issue, Australian Book Review, The Wheeler Centre, Kill Your Darlings and Voiceworks, amongst others.