Leeds Book Club will be participating in the Arts and Minds Network‘s new project on raising awareness of mental health issues.

This cracking review is provided to us by book lover @BatRachy.

Who is mad? Who is sane? Who decides? Welcome to the Dorothy Fish, a hospital in North London. N has been a patient for thirteen years. Day after day she sits smoking in the common room and swapping medication. Like the other patients, N’s ambition is never to be discharged. Then in walks Poppy Shakespeare in a short skirt and snakeskin heels. Poppy is certain she isn’t mentally ill and desperate to return to her life outside and, though baffled, N agrees to help her. But in a world where everything’s upside down, are they crazy enough to upset the system? 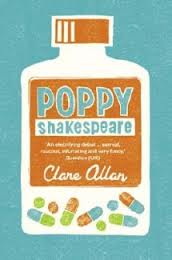