Pirouetting on the boundaries between sci-fi, the crime thriller and intertextual whimsy, Jasper Fforde’s outrageous The Eyre Affair puts you on the wrong footing even on its dedication page, which proudly announces that the book conforms to Crimean War economy standard.

Fforde’s heroine, Thursday Next, lives in a world where time and reality are endlessly mutable–someone has ensured that the Crimean War never ended for example–a world policed by men like her disgraced father, whose name has been edited out of existence. She herself polices text–against men like the Moriarty-like Acheron Styx, whose current scam is to hold the minor characters of Dickens’ novels to ransom, entering the manuscript and abducting them for execution and extinction one by one. When that caper goes sour, Styx moves on to the nation’s most beloved novel–an oddly truncated version of Jane Eyre–and kidnaps its heroine.

The phlegmatic and resourceful Thursday pursues Acheron across the border into a Leninist Wales and further to Mr Rochester’s Thornfield Hall, where both books find their climax on the roof amid flames.

Meet Thursday Next, literary detective without equal, fear or boyfriend. There is another 1985, where London’s criminal gangs have moved into the lucrative literary market, and Thursday Next is on the trail of the new crime wave’s MR Big. Acheron Hades has been kidnapping certain characters from works of fiction and holding them to ransom. Jane Eyre is gone. Missing.

Thursday sets out to find a way into the book to repair the damage. But solving crimes against literature isn’t easy when you also have to find time to halt the Crimean War, persuade the man you love to marry you, and figure out who really wrote Shakespeare’s plays.

Perhaps today just isn’t going to be Thursday’s day. Join her on a truly breathtaking adventure, and find out for yourself. Fiction will never be the same again …

Jasper Fforde traded a varied career in the film industry for staring out of the window and chewing the end of a pencil. He lives and works in Wales and has a passion for aviation.

Welcome to the inside of my head. Apart from a few panicked memories about getting lost in a department store aged five, my imagination is a pleasant enough place to be – if you’re me. If you’re not me then you can do the next best thing and order up ‘The Eyre Affair’ and have a read. There should be something to appeal to most readers as the plot visits, at one time or another, most genres – thriller, crime, romance, humour, sci-fi, literary – a veritable Swiss army knife in fact; if you don’t like a subplot then wait awhile – another is sure to pop up soon.

Over here at the Fforde Ffiction Ffactory we have many more novels bubbling away in our cauldron as well as a Thursday Next website and much else besides. 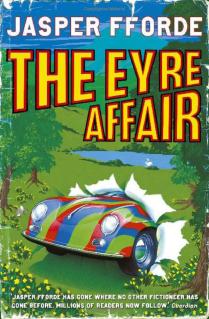 It’s been a year since I went to my first LBC meeting and felt it would be fitting to write this review. However at the time I hadn’t read it. It took just over a day to finish it and, boy am I glad I did. This book blew me away and I didn’t know it was part of a series and can’t wait to get my hands on the next one. This was chosen by Alison to read and was LeedsBookClub’s choice to give away at World Book night this year.

It was on a sunny Sunday evening sat in the cosy settings of The White Swan that our story begins, talk of Dodo’s as pets (actually happens in the book), Twitter identities, the story from monsters made of bubble wrap to a scary impression of Kate Bush and the fact that when you bite heads off jelly babies, they know!

To the book and here we meet Thursday Next, our heroine, Lover of books and a literary detective. Her job/role is to deal with illegal traders, fraudsters and copyright infringements. Living alone with only her regenerated pet dodo named Pickwick. An ambitious young lady wanting to further her career but unable to do so until she meets with Hades, A criminal ,mastermind out to bring characters into our world or banish them forever!

From gothic fiction (Jane Eyre) to mention of Shakespeare and meeting characters from Charles Dickens this book dips in and out of different worlds yet keeping us firmly on our feet.  This book introduces us to so many worlds and with so much going on you would think the story and characters would be watered down, but they’re not. You’re sucked into another dimension without realising until you come back down with a thump on your sofa when the story ends.

I loved the fact that this book was based in England, there sometimes seem very few and the fact it used classic stories and twisted them into a sci-fi/ mystery adventure. It is probably only in books and in films where the impossible can become the possible. The fact that there is a magic machine which can extract characters from books into the real world, to be able to meet our heroes and heroines of our favourite stories, in Thursday Next’s case it was Rochester from Jane Eyre, who appears a few times to save her and in return she brings Jane back to him.

During the discussion a question was asked about the problem where we find what happens we fall in love with books, bringing the story to life in our minds is that sometimes we find to have someone else make it into a tv series or film may spoil the feeling of the book, spoil the journey you made with the characters like in the book, people were in uproar as the story changed in front of the eyes, demanding it be returned to it’s original form, however drab it was. Today TV & filmmakers do the same as it is their vision of the story, and especially if their
idea comes from a book, sometimes they can make it how we see it or improve it, sometimes they can destroy it. But in the end stories are to be told and shared in whatever form.

And finally for people who have not read Jane Eyre but have read this would you go to the original now? Just food for thought.

Reason to read it – The Dodo still exists and you can have it as a pet!

One thought on “WSwan LBC – The Eyre Affair – GUEST”