One of our Superstar Guest Stars has agreed to a new challenge based on our chats relating to #LBCPuffins.

Can’t wait to read each review as they come!

It is about three mischievous little brownies who aren’t invited to the King’s party and are tricked by a witch to help kidnap the princess which leads them into all sorts of adventures trying to rescue the princess and make up for their mistake.

I was given this book by my Grandma when I was a child. I can’t remember how old I was but the story has always stuck with me and the book is one of my most treasured possessions. I have only ever read two of Enid Blyton’s books. This one and ‘The little brown bear and other stories’. I decided to re-read this after I set myself a challenge when Leeds Book Club had set-up LBC Puffins, a bookclub for adults reading kids books and I realised I hadn’t read any other Enid Blyton Books.

I am intrigued to see what my take on these are because obviously reading when you’re an adult is completely different to when you were a child. I started reading kids books a few years back because I got so bogged down with adult fiction I felt like I needed a break, and it worked a treat. So to kick off my challenge here’s my first book review.

The story starts with us meeting the three brownies who live in Crab-apple Cottage eating their breakfast when they hear the postman knocking on all the doors down the street. The brownies notice everyone getting letters and are disappointed they don’t receive one. They run and ask their neighbour Gobo and find out it’s an invitation to the king’s party.

They haven’t received one because they have been naughty and the king does not invite naughty brownies. They then hear that the
conjurer cannot make it to the party and this gives the brownies an idea. They will go to the party as ‘Twirly-Wirly the Great Conjurer’ and his assistants. Before they go they are met by a witch who offers to sell them magic. They are given a basket to which people can climb into and make them disappear. What they don’t realise, is that it is a trick to steal away the princess. This then leads them into all sorts of adventures and trouble. First they are banned from fairyland until they can find their goodness, this they are not sure about so they decide to set off to Witchland to rescue the princess.

Each chapter of this book is a new adventure. The brownies aren’t sure what goodness is or how to find it so they set off in search of the princess and on the way meet all sorts of different characters.

Firstly they meet a wizard who traps them and makes them write out all his spells until Hop works out a way to trick him and escape. They then find themselves on an island where they find a
mermaid who has had her tail made into legs by a horrible red goblin to make her clean his castle.

With some quick thinking and a little magic they manage to escape and return the mermaid to her island and restore her tail. They then set off again and end up in giant land where they are captured and used as ‘live’ cake decorations. Once again they manage to escape by use of some magic this time ointment which changes the sizes of the giants and they end up in a worm-hole which leads them to the land of clever people.

In this land everyone must talk in rhyme and come up with a
riddle everyday and answer one or be spanked for being stupid. Here they meet a little girl who is from the land of giggles who can’t make up rhymes, but it is her hair that helps them escape. To escape you must be able to find something the wise man can’t do.

The adventure then continues on the green railway where their impatience leads them into more trouble when they steal a train
and end up crashing it in toadstool town. They again manage to escape and end up in fiddlestick field where they need to find the Saucepan Man who can lead them to witchland. They find the
Saucepan Man and realise he is quite deaf so have to speak to him through written notes. He agrees to take them but warns of the Dragon-bird who will steal you away for the evil golden dwarf to eat.

Unfortunately this happens to the Saucepan Man and the brownies decide they can’t leave him to his fate so attempt to rescue him. They are told a long word that will help they vanquish him and
they all take parts to remember. The word is ‘Kerolamisticootalimarcawnkeeto!’.

When the reach the castle they find there is no entrance and feel defeated, until after some thought they come up with a fantastic idea and are able to reach the Saucepan Man. The Saucepan Man shows them to witchland and then sets off on his travels. They find that they cannot get in until a small mouse is in need of help who then shows them to his master where they are then led to the ‘bottling man’ who gives the brownies their ‘goodness’ in bottles which has come from them helping all the people on
their travels. The mouse then shows them an entrance to witch green eyes house and unfortunately they are instantly captured by the witch and a locked up in the tower with the princess and are told they can only escape if they get the princess to agree to her demands. However because the dragon bird has no master the brownies are able to call on it for help and are able to fly back to the castle.

However they are nearly captured again by the witch who only lets them go when they give up their bottle of goodness which means they cannot enter Fairyland. The princess however rescues them
after telling her father and everyone how the brownies helped her escape and all is forgiven.

One phrase I liked in this story was when they tried to enter the evil golden dwarfs castle and they can’t think of a way in and Skip says “Listen” “If you really want something badly enough, you’re sure to find a way. Now, let’s just keep quiet and think very hard”.

I think what Enid Blyton tries to say in this book, is that naughtiness or selfishness doesn’t pay and that to do good deeds for others pays more and earns respect from others. The story starts off with the brownies being naughty and naive and then when they set off on their adventures without realising it they slowly become braver and can face anything that is thrown at them by working together and thinking things through. And in the end it proved anyone can change given a chance, even the unexpected ones. 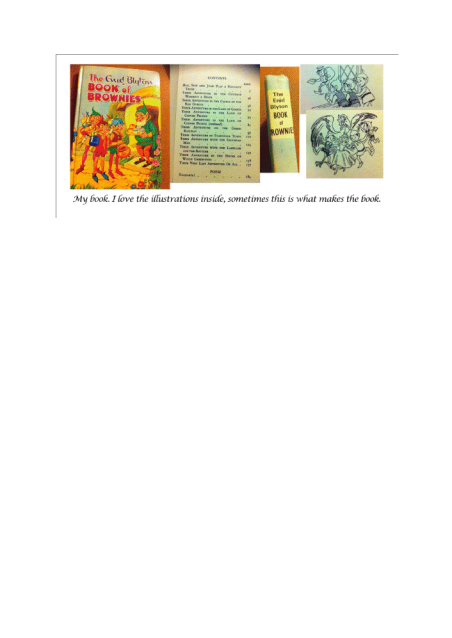 Helen tweets from @isfromupnorth and has her own blog Hello from me to you. It’s worth bookmarking because Helen knows EVERYONE and is involved in all sorts of lovely events!