I’m reading through all six of the Booker Prize shortlisted novels  – attempting to finish before the winner is announced, although given the size of the books that is looking unlikely at the moment! Here’s the third of my reviews, for Swimming Home by Deborah Levy

As he arrives with his family at the villa in the hills above Nice, Joe sees a body in the swimming pool. But the girl is very much alive. She is Kitty Finch: a self-proclaimed botanist with green-painted fingernails, walking naked out of the water and into the heart of their holiday. Why is she there? What does she want from them all? And why does Joe’s wife allow her to remain? 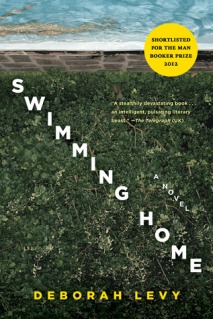 Wow. Now this is what I was hoping for from the shortlist. The two books I read previously left me a little cold, but this absolutely blew me away.
Swimming Home is a deceptively slim book – a novella, really – that packs an awful lot into its mere 170-odd pages. Although little actually happens, Deborah Levy’s carefully crafted prose creates a detailed picture of the effects of depression and concealed emotions on a group of outwardly contended people.
The book follows philandering poet Joe Jacobs, his war reporter wife Isabel, and their teenage daughter Nina; who are on holiday with their friends Mitchell and Laura (who own some kind of trendy shop selling African jewellery and furniture, that is on the verge of bankruptcy) when they discover Kitty Finch swimming naked in their pool. After Isabel inexplicably invites the girl to stay with them (it’s implied that she has ulterior motives for doing so, possibly to goad her husband into yet another affair that she can use as an excuse to leave him), Kitty’s presence begins to affect all the other character’s moods and decisions. She is the catalyst that brings to the surface all of the things that have been left unsaid between the group.
Although on the surface this book looks like fairly typical middle-class fare, of the type that gets the Booker accused of irrelevancy and elitism, I think it is something much more interesting than that. It’s hard to put my finger on exactly what makes the book so gripping. The character of Kitty Finch is the sort that I usually just find irritating in a book: beautiful but troubled (she is referred to as “the beautiful, mad girl” more than once), obsessed with Joe Jacobs and his poetry, and seemingly spending almost the entire book wandering around naked, in the hands of any other writer she would just be a stock “fragile beauty” creation. It is to Levy’s credit that despite her list of standard quirks, Kitty doesn’t come across as this kind of stereotype at all. Instead, she seems at once both a genuine, real person, and a looming, disturbing figure over the lives that she interrupts.
Depression is a key theme in the book. Kitty is the obvious example, telling Joe that she has recently been discharged from a mental hospital and stopped taking her antidepressants, but every other character is also suffering with their own demons to a greater or lesser extent. Joe, who was abandoned in England aged five during the second world war by his Polish refugee parents, explores his own battles with depression and coming to terms with his past through his poetry. Isabel is traumatised by her years of reporting from war zones, and their daughter Nina struggles with her feelings of abandonment by her physically-absent mother and emotionally-absent father. Laura and Mitchell are also affected by Kitty’s presence: Mitchell becoming resentful of what he sees as her judgmental stance on his lifestyle, and Laura suddenly aware of the gulf between her and her husband.
The writing is just stunning. At times dreamlike, at others clear and sparse, Levy chooses her words carefully and wields them to create a novel that feels much longer than it is, due to how much detail is carried between the lines. I think it’s the careful use of language that lifts this book above what could have been a fairly cliche tale of middle-class woes, and makes it into something so prickly and disturbing.
Out of the three I’ve read from the shortlist so far, this is by far the strongest. I think this could win. I certainly hope it does.
SCORE:
9/10