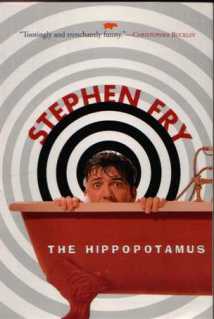 This was my book club choice for August. I had only ever read Stephen Fry’s autobiography “Moab is my Washpot” but love him to bits. I have found him hilarious ever since I first watched Jeeves and Wooster and still watch anything I can find with him in it now. So this was a book I had bought ages before and thought I’d introduce the rest of the bookclub to him. This is a very strange book, but I ultimately really enjoyed it. I’m not sure if the same can be said about the rest of them!
The hippopotamus is the narrator himself, Edward/Ted/Tedward Lennox Wallace. Ted at the opening of the novel has just been fired from his newspaper where he worked as a critic for basically standing up in the middle of a show and shouting abuse at the actors. This will give you a little insight into how obnoxious Ted can be. During his evening of drowning his sorrows, he meets up with his God-daughter Jane, who he hasn’t seen since her christening because of a disagreement with her parents. She is delighted to meet him again and invites him back to her apartment where she tells him she has Leukemia and has only been given a number of weeks to live. Ted of course is shocked by this revelation but she assures him that it’s ok, because she believes the doctors are wrong and in fact that she has been cured. She then gives him a mission to fulfill for her. She wants him to go to visit the family of his other god-child David Logan under the pretense of writing Lord Michael Logan’s memoirs. Jane asserts that there is mysterious going’s on in the house and she wants to see what Ted will make of it all.
Ted – having nothing better to do – decides to write to David and ask to visit. While there, the house becomes over run with people who decide to visit; there is Oliver, who is an ex=priest and very very camp, he routinely discusses things like Daisy Diary and refers to himself as Mother Mills; Jane’s mother also makes an appearance as does her best friend and a businessman and his wife and daughter. It becomes clear early on that there is a mystery, in fact David himself is believed to have special healing powers and each of the guests (apart from Ted who is unaware) are there to be cured of some ailment.
The opening of the novel is very very slow, the first chapter is mostly describing Ted, and he doesn’t come across as a very nice person at all. The book doesn’t really start to grab attention until he visits the Logan’s estate. I found it very funny, but at times disturbing. But it reads like a cross between a murder mystery and a PG Wodehouse novel with an unusual collection of people gathering in a large house with hilarious consequences.
There was a part about halfway through where I read it and thought “Oh Lord, what have I done, what are the book club going to think about this?” But I read on and finished it and have to say was delighted that I did. If you like Stephen Fry’s sense of humour, or have enjoyed PG Wodehouse’s works either books, or tv, then give this a go.