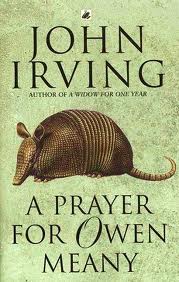 John Irving’s A Prayer for Owen Meany is the inspiring modern classic that introduced two of the author’s most unforgettable characters, boys bonded forever in childhood: the stunted Owen Meany, whose life is touched by God, and the orphaned Johnny Wheelwright, whose life is touched by Owen. From the accident that links them to the mystery that follows them–and the martyrdom that parts them–the events of their lives form a tapestry of fate and faith in a novel that is Irving at his irresistible best.

Ok kids, here we go! The fabulous and talented [ 😉 ] LeedsBookClub has left me, a Science Graduate, in charge of the write up! This is going to be great, as words good with I am.

Anyway… moving on! Full disclosure, I didn’t finish the book! (Shocker for all those who know me from book clubs). I was therefore a little lost with some of the plot points (Spoilers you might say) that people were mentioning throughout the meeting, so if there are any factual errors the editor (say hello…HEY ALL!) will have to edit them out.

So to the meeting. It was nice to see regular faces in the crowd, along with new ones who add to the experience! But it was a regular face to all book club members that got us underway(THAT’S ME!!!).
A huge fan of John Irving’s work, they were glad that this book had been picked (though going from discussions on twitter, not when they saw the length!!) having read 3 of Irving’s other works.
And it all started off so well!

One of the feelings that permeated the meeting from people who had read Irving before was just how well he uses language to describe the world within the book. In this book, the sparse and evocative language meant that many could picture the town of Gravesend just from the words Irving was sketching with.

OWEN MEANY, THE BOY WHO SPOKE CONSTANTLY IN CAPITALS. MANY MEMBERS WHERE ABSOLUTELY MADDENED BY HOW OWEN SPOKE, ONE MEMBER COULD HAVE SCREAMED!
Anyway, enough with the capital letters! I’m sure that many of you who are reading this in your head had a shouting voice reading the last bit.
Another member then mentioned that, even though they found Owen’s speech pattern annoying, they did feel that it seemed to fit in when they were performing the nativity – adding humor into the section. Of all the characters, Owen seemed the most disliked by many of the members, some feeling that he was a bit of a snob and obnoxious, some finding him irritating (and not just for the capital letter speech) and one member described Owen as ‘asking for it’ with the way he was treated in Sunday school.
For some, the only way through the book was to picture Owen as someone else. There were then descriptions of Owen being pictured as E.T or a Hobbit just to help members through the sections containing him.
Owen’s death was then discussed as many members had been waiting for it (one even described how they were nearly driven mad by how long it took to come). In the end it is a very noble death, sacrificing himself for others and this was fine but it was then spoiled for many with a very trite last line, and this upset and angered members.

With many members disliking (or indeed HATING) Owen, it was then confusing to find that many of the characters in the book liked him. He was the voice of the school paper (God, could you imagine a paper shouting at you with capital letters, that would be awful… hang on… Isn’t this what the Daily Mail does?), people listened to him, girls chased after him. There was talk about
whether Owen had some kind of spell over people. Was Owen the second coming of Jesus?
According to Owen’s mother, she had had an immaculate conception when getting pregnant with Owen. This though was written off by the Catholics in the book, though the narrator of the book seemed to believe it. One member put forward that Owen could be Damien (of 666 fame)!
This spell over people could be seen
by many members throughout the book, as Owen seemed very well accepted by other characters even after accidentally killing someone’s mother with a baseball and literally disarming an armadillo. One member then pondered upon the fact that maybe Owen suffered from aspergers.

We then moved onto the other characters in the book. Starting with Owen’s parents – whom one member described them as reductive. They seemed to be written as derogatory stereotypes and this seemed to go for many characters in the book. Only 5 characters seemed to get fully fleshed out and developed by the author. One member also felt that one character (I only caught that it was a female one, and
molester was in the name…. help editor??)HESTER seemed to be being written off by the author, but in the end they had turned their life completely around and this was felt by the member as almost like a mini-victory. One of our new members then joined in, saying that they actually felt that the narrator was far more annoying than Owen. They felt that Owen had more substance to him, he would make decisions for himself and others, whereas the narrator was too soft and passive and needed, no relied on, Owen to make decisions for him. There was then a discussion on the narrator’s celibacy, and the fact that it was maybe not through choice, but through the fact that Owen had never said to him to ‘GO SPEAK TO THAT WOMEN’.

The character of the pastor was then brought up. One book clubber had asked whether it had been Owen that had held onto the ball after it had struck the mother down (and she became more powerful then you could ever imagine…no wait, that’s Obi Wan in Star Wars…carry on).
It had turned out that it was actually the character of the pastor that had held onto the ball, and that he had done this because he was in love with the mother. Having had an affair (and was thus the narrator’s father, more in a minute) and broken it off, he had, upon seeing her again at a baseball game, fired off a quick prayer to God to strike her down so he wouldn’t have to see her again. It was then Owen (more evidence for the second coming theory – Owen acting as a ‘hand of god’) that hit the mother with the baseball and killed her. This causes the pastor to stop praying. Many members were then bemused by how the pastor was then ‘scared’ back into his faith through the narrator haunting him with his mother’s dummy. They were then further bemused by the scene where the pastor tells the narrator he is his father (again, having not read the book, I imagine Star Wars episode 5: Empire Strikes Back) saying it was absolutely unbelievable.

We then rounded up with a description of the undercurrents in the book. Yes there was comedy in there, descriptions of a Grandmother with lots of wigs and one jumping out at a character in a corridor of jam (I assume I missed something, or it was lost in translation), and of a kid getting stuck as a flying angel in the nativity. But the main undercurrent was that of the politics of the Vietnam war. One member described the writing about it as beautiful and also interesting, and how it seemed to analyse the whole atmosphere of the time. They also felt that that the book was more significant as an ‘antiwar’ book than as a ‘contemporary fiction’ book, and that it may possible be more significant now because of the Leveson inquiry. The book also looked at the politics of the Nixon and Reagan administrations, linking in immigration which then lead to comments on segregation in American schools during the 1960s. One book clubber then provided us with an anecdote about their late partner working as a governor of a faith school in this country not long ago to remind us that this still may be occurring. It was then brought up by a member that maybe Irving was an English teacher as there was a classic ‘English teacher rant’ in the middle about how kids these days ‘don’t read the writing’. It was then pointed to that maybe the book was preaching to us about how stereotypical Middle America is. Some felt judged by this.

All in all, it seemed that most members didn’t enjoy the book though to be fair most didn’t finish, with only one or two enjoying it (or indeed finishing it). One member then rounded it up nicely by describing the non-dialogue writing as very beautiful – allowing them to fully imagine the world the story took place in and that Irving’s writing could take you anywhere throughout the history of the book with ease. They felt that this was needed due to the size of the book needing you to be fully immersed in it, and the fact that when there was dialogue it seemed to be like, and I quote,
‘…wading through old porridge that smells like vinegar’.

Although not a bad book in any sense, some felt that some of Irving’s other work may be a better read with ‘Ciderhouse Rules’ being mentioned. There was also a warning for Kindle users. When reading capital letters, the kindle could become confused between letters and numbers(A PR0BL3M W1TH 0W3N MEANY) and also that there were no line breaks which added to the wading sensation.

Discussion then wandered off as it can do to loosely related topics. Tonight’s topics were a member’s dads backpacking adventures, the Irish civil war, and Nikes special edition Guinness coloured trainers (they had been given quite an ill-thought out name). There was also a film recommendation for ‘The Guard’ staring the Irish actor Brendan Gleeson.

We then came back to do the scores (which I’m sure the editor will add below) and pick the books for September and October (again added below). So, that was the write up! I’ve been me, you’ve been you, and I’ll leave you with a reminder that ‘this is not the twitter you’ve been looking for….. move along!’ 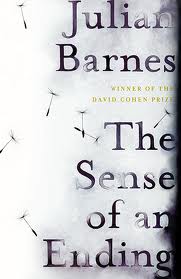 Sense of an Ending – Julian Barnes