A friend of LeedsBookClub (say hello on twitter here!), Marie is writing an EPIC review of The Tenth Kingdom!

(Quick recap – Virginia and her father Tony have fallen through a magic mirror from New York into the nine Magical Fairy Kingdom.

In the company of a Wolf and an enchanted Prince – currently a Dog – Virginia and Tony must travel through the Kingdoms, seeking the evil Queen. She is the Prince’s step-mother and has hidden his real body. 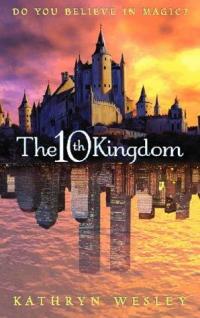 When night falls they make their way to the castle but are forced to find another entrance when the guards notice their filthy clothes.


So they swim in through a portcullis in the moat. They make their way through an underwater passage without the usual somebody getting stuck drama!


They find the royal chambers and discover The Queens mirrors Tony activates the travelling mirror and is keen to leave but Virginia wants to see her mother.


It’s at that moment The Queen enters and informs her, her last request is granted. Wolf bows to her and asks if he did well.


Virginia is devastated (as am I).


Tony and Virginia try to get The Queen to recognise them but she thinks they’re trying some kind of magic on her and has Tony taken away but keeps Virginia to question. She tells Virginia how weak she is, how unwanted, plain lots of hurtful things and even
encourages Virginia to look into her mirror with her. The room starts to get darker and Virginia struggles to breath, she starts to struggle and glances into another mirror and realises that The Queen is trying to strangle her.


Virginia pulls away and The Queen is shocked she has
been able to resist her. She steps forward to kill Virginia and at the same time Virginia reaches for the comb but its gone! The Queen reveals they have been talking for over an hour and that Virginia has revealed all her pathetic plans. She places the comb into her hair and says the only way it will kill anyone is if it breaks the skin.


Down below the guests in the ballroom are all anxiously awaiting Wendell including a 200 year old Cinderella.

Virginia is put in a cell with Tony and she’s very upset, he decides to tell her how when her mother left she tried to drown her in the bath. (Nice Dad, bet that made her feel loads better).


Up in the Kitchen Wolf is creating a poison to kill the guests. The Queen is very pleased when a chef tries a drop and dies instantly.


The Dog in human form enters the ballroom and The Queen goes and hides with a muzzled and chained Wendell.


Tony has discovered their cell once held one of The Grimm brothers (and no not one of The Grimm’s from the appalling show Grimm). Fortunately for them the mice in the cell speak
German and so translate the message left by Wilhelm Grimm. To escape the cell they need to turn a lever. So they are able to escape. (It’s a really good job they built a lot of these ancient
dungeons with secret escape routes).


The Dog meanwhile must pass three tests before he can be crowned. The first is a question of his bravery. So he tells the tale of how he killed the Troll King. He is then pronounced master of bravery.


They then question his wisdom so he tells them how he has roamed his kingdom and sniffed every hedgerow and found lots of bones. They were so big he was only able to carry one so he has buried the rest! The stupid crowd think this means he’s building up the military reserve and dub him wise Wendell.


Tony and Virginia have now escaped their cell and managed to find weapons. Good thing too as they just opened a door and behind it are The Troll Stooges. They lock the trolls in the room and find another way. Tony decides to stay behind and hold off the Trolls.


For the Dogs final challenge Cinderella asks if he is really the man he claims to be. He says he’s an imposter, he isn’t a Prince he is ordinary. He will never be great like Snow White, he
wasn’t born to lead he’s a pack animal. He’s a retriever not a leader and wants to tear off his clothes and go running in the field. He doesn’t want the job and he isn’t worthy.


Cinderella then announces he has shown humility he has passed the test.


Virginia has found her way onto the gallery above the ballroom only to be grabbed by the Huntsman who tells her she gets to watch. So she can only watch in silence as everyone drinks a toast to Wendell and dies. He drags Virginia into the ballroom just as The Queen enters she tells her that she is very
persistent and tells Virginia she is going to let her go. But Virginia refuses to leave so The Queen tells her she was nothing but an accident and should have been killed at birth. (Bitch).


The Queen chokes Virginia who is in danger of passing out when she grabs the comb from The Queens hair and stabs her in the neck.


The Queen collapses to the floor and Virginia holds her crying for her not to die. It’s at this moment that Tony bursts in having defeated the Trolls.


The Queens expression softens as she tells Virginia not to cry and that she sold her soul. She dies in Virginia’s arms.


All of a sudden everyone in the room sits up wondering what happened. Virginia is relieved to learn that Wolf swapped the poison for Troll dust. (So he wasn’t really evil, eek).


He lets Wendell go who leaps into the dogs arms and in an instant they’re back in their true forms. Everyone cheers thinking that Wendell saved them.


Two days later Virginia is in a beautiful bedroom after having slept for two days. She’s still devastated she killed her mother despite Wolf’s comforting words.


They all assemble in the ballroom as there is a celebration going on, and Wendell calls them all onto the stage as he wants to give them all a reward.


Tony is dubbed Anthony the Valiant and given a medal. Whilst The Dog is given a collar medal and a gold kennel to live in. (This doesn’t seem very practical wouldn’t it condensate and be very uncomfortable). He also has servants to clear up after him.


However he has no medal for Wolf, who is very upset until Wendell says that instead of a medal he will grant all Wolves a royal pardon in his kingdom. (Yay, Wolf).


Virginia gets a flower that was given to him by Snow White the day she left the castle when he was seven years old.
The Trolls are brought in and sentenced to death until Tony begs that they be sent home and given another chance.


Just before the banquet Virginia slips down to the mausoleum where her Mother’s body is. She places the flower in her mother’s hand where it blooms. (Magic).


She arrives at the banquet and Wolf makes room for her, she decides she would like fish to eat and it promptly arrives, (if you got that service in a restaurant you’d be either wondering
if it was cooked properly or wondering if it had been microwaved).


Anyway the fish arrives and just as she’s tucking into it she spots the engagement ring Wolf was going to give her. (You have to wonder who cleaned the fish if there’s a ring in it. I’d
sack them).


The ring says that it never fails to get its girl and Virginia decides to try it on but that she doesn’t want to get married as she’s too young. However once the ring is on it refuses to
come off. Wolf says that they need to get married so their baby can have a father.


This causes further protests from Virginia who doesn’t want children. But Wolf says it’s too late for that.
(Dirty Virginia, first time sex with someone unprotected! See once again an example of how unrealistic the earlier sex scene was. Unshaved legs and no protection. Tut).


The story ends with Virginia, Tony, Wendell and Wolf gathered round the mirror. Tony decides to stay behind, seen as he’s still wanted for armed robbery back in New York (and he’s been wanting to go home all along, you have to wonder why he didn’t think about that before).


Virginia and Wolf head back to New York, Virginia’s happy to be home with Wolf in their happily ever after. (Aw).


Well i hope you all enjoyed my review.
The Tenth Kingdom

Listen to the Tenth Kingdom Soundtrack on Spotify here!
Or watch the videos on YouTube here!

This evening, in the abbey #KirkstallAbbey #Kirkstall #Leeds
X and I went to the Tutankhamen exhibition ay#t @saatchi_gallery in November and it was amazing. For some reason, the Guilded Wooden ‘Ostrich Hunt’ Fan has really stuck with me. The wooden frame would hold 30 ostrich feathers.
Visiting with @bookelfleeds (@beerdarella) and my new (tiny) BFF.
Feeling the love @theoldkingsarms 😍😍😍 #LBCHorsforth @leedsbookclub
A scrap of blue sky this evening #KirkstallAbbey
The River Aire is running very quickly this evening. #RiverAire #Kirkstall #KirkstallAbbey