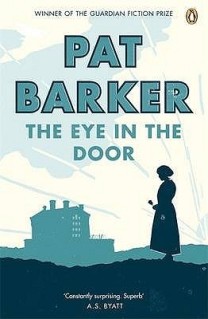 The Regeneration trilogy was publishing in the early-mid 90s, and immediately received great critical acclaim, with the second, The Eye In The Door, winning the Guardian Fiction Prize in 1993, and the final book, The Ghost Road, winning the Booker in 1995. When I mentioned I was reading them on Twitter I instantly had dozens of responses from people happily reminiscing reading them when younger, many of whom had studied them for A Level, and had an overall positive reaction.

I bought the three books for £4.99 on thebookpeople about three years ago, when I was going through a thebookpeople phase (they come in big red boxes! They are really really pretty!) and over the years have picked up a Pat Barker whenever I’ve seen one, despite having not actually read any of them, because they’re all a similar size, all really funky matched covers, and one day I thought I’d get round to them (I must have put Regeneration in the Book Club Tankard about three times, and I’m gutted it didn’t get picked as I reckon a book club would eat these books).

I started Regeneration last Tuesday in bed, finished The Eye In The Door on Monday night, and would have finished a lot earlier if I hadn’t had a weekend off reading Jilly Cooper, and finished The Ghost Road last night. I loved these books.

The trilogy begins in Craiglockheart military hospital, just outside of Edinburgh, in 1917. Seigfreid Sassoon, war hero, has just been declared unfit for service, after protesting rather publicly against the continuation of the war. Sassoon is not a pacifist, he is a leader of men who has seen too many of them die, and rather than risk him being court-martialled and lose an excellent officer, his friends connive to have him briefly sent for treatment for shell shock, hoping this will explain away his otherwise baffling belief that the war in which millions of people have died is somehow a bad thing.

Reading these books with modern non-violent lefty hindsight it is quite unbelievable to me that 100 years ago, more or less, it was considered so insufferable to disagree with war. My years of Stop The War and Ban the Bomb parenting have left me believing that people who think it perfectly permissible to blow up other people in the name of a country are the mad ones, not those who like me think this is an awful thing and should be stopped forever. After about a third of the book though, hindsight falls away; Barker’s pace and sense of place are so well observed and easy to fall into you not only feel that you are in the 1910s, you are from the 1910s, and what to a naughties girl seems absurd seems perfectly reasonable in 1917.

Sassoon is sent to Craiglockheart and put under the care of Dr (Captain) Rivers, who is an anthropologist and Freudian psychologist caring for many different patients introduced throughout the novels. Amongst them are Wilfred Owen, who becomes particularly attached to Sassoon, and one of the few fictional characters in the novel, Billy Prior, who becomes central to the trilogy.

Now because I’ve foolishly read all the books without pausing for breath and to review them, it’s quite hard for me to talk about Billy Prior in the context of this book alone. He is a working class lad made good because of a scholarship and pushy parenting, who is an officer without being a gentleman. Sex-mad, arrogant and severely damaged, not just from his experiences in France but with issues from his adolescence and childhood which we find out in the later books, in Regeneration I really didn’t like Billy. He meets and falls in love with a local factory girl, Sarah, but apart from that I thought he didn’t really add much to the novel whose main focus seemed to be on Sasson and his relationship with Rivers.

Psychology is an odd beast. I’ve read a bit, but not enough, on the subject to know that frankly Freud was talking out of his arse most of the time in my opinion, but the early developments in how people believed the mind worked are fascinating and this book combines the horrors or war (said in Movie-Trailer-Guy Voice THE HORRORS OF WAR) with serious consideration into how people thought that you should behave, vs how people actually behave. Barker somehow manages to cram everything into this trilogy, sex, gender, class, race, pacifism, socialism, colonialism and feminism. But it is psychology that really stands out, as Rivers re-evaluates his beliefs through his relationships with his patients.

Regeneration is an excellent, stand alone book, however the characters journey’s were obviously not over, so I eagerly started The Eye In The Door

The Eye In The Door is definitely my favourite of the trilogy. I started the book on the train to work one very sunny Thursday morning and the first chapter contains an incredibly graphic gay sex scene. Excellent. A lot more ‘political’ than Regeneration-which is amazing considering Regeneration was dealing with the whitewashing of dissent amongst the officers by the government in order to maintain the status quo of the War.

The Eye in the Door looks at pacifism, feminism and socialism and how the three were linked with homosexuality by a propaganda fuelled conservative hawk-like ruling class aiming to bring down left wing thought that was apparently ruining the Great British Public. That was seeing millions of its men being needlessly slaughtered. Again, Barker makes one aware of how much different modern thinking is, how much we rely on Captain Hindsight for our moral conscience. We know that the First World War did absolutely no good whatsoever, apart from breaking up some aspects of colonialism, it indirectly brought about Hitler’s rise to power and subsequently the Second World War and all the horror that went with that. Nowadays being homophobic is a hate crime, but this book made me really aware of our precarious our modern day thinking is, and how so many people’s lives were ruined before.

Billy Prior, who turned very rapidly into my favourite character in this book, is now working in Military Intelligence along with another of Rivers’ patients, Charles Manning, an acquaintance of Sassoon’s mentioned briefly in Regeneration who is being ‘cured’ for his homosexual impulses after being caught soliciting by the military police.

Prior is a fascinating character, not only by virtue of his dual nature-a working class grammar school boy and an accomplished officer, a survivor of abuse and former rent boy, and a loving boyfriend who seems to shag everyone in sight. His loyalties towards the people he grew up with, and the explorations of the slums of Salford, really made this book stand out. Although most of it wouldn’t make much sense without Regeneration, for me, this was the book it was worth reading the trilogy for (you know when people go ‘the first season isn’t really good but by season five it really picks up’ and you’re thinking ‘why did you spend 48 hours of your life getting to that point’? Yeah, totally get that now. Even though I’m still giving five stars to Regeneration).

The Eye In The Door is probably one of the best structured books I’ve ever read-up there with The Secret History by Donna Tartt. Barker isn’t writing this book, she is conducting it-she’s got the sheet music in front of her and knows exactly where to indicate a crescendo or a diminuendo. I properly properly sobbed at a chapter of this book, and yet at the end, by God I was hearing the theme music! I know there has been a film made of Regeneration, but DEAR TV PEOPLE, ADAPT THIS. And Shardlake, and Half of the Human Race. Stat.

I whizzed through this book, and know full well I’m going to have to re-read them all again properly, but I immediately started on The Ghost Road, because I couldn’t’ wait any longer to find out what happened to Billy.

The Ghost Road is a very different book. For the first time, the action is, well, in the action, set partly in Scarborough (hooray!) and partly in France. Interspersed throughout are the memories and dreams of a disillusioned and unhappy Dr Rivers, now working in a London hospital with his old partner Dr Head, with whom he performed the Regeneration of the Nerves experiments after which the trilogy is named. Rivers’ memories of his time as an anthropologist in the Pacific Ocean (I think, geography was never my strong point) were beautifully written, but I was constantly thinking ‘jog on, Bruce Parry, I want to know where Billy Prior’s at’.

The Ghost Road does however have the most comedy rushed-sex scene in the world in it, and brings back Wilfred Owen, whose poems I did at school (like everyone else ever) and loved. The last half of the novel also is written in diary format, which although is markedly different from the rest of the trilogy, also adds a certain pathos, as the reader is counting down the days until the end of the war. I did properly sob on completing the novel, but I wouldn’t bother reading The Ghost Road on its own and to be honest I don’t get why that, and not The Eye In The Door, was the one that won the Booker.
I loved reading this trilogy, even though it covers pretty hard hitting subjects, it taught me a lot and, along with Half of the Human Race, brought a more ‘human’ element to a time that can be written off as ‘the past’. With the centenary of the First World War next year I can see this being a subject that is going to get a lot of press, and the Regeneration trilogy would be a great introduction to it, as well as to historical fiction in general.
5/5 to Regeneration, 5/5 to The Eye In The Door, 4/5 to The Ghost Road.