I’m going to keep this short. Mostly because the book is a bit feeble. And I’m planning a rant for the review.
Dermot and Claude are still living with Sookie and she  finds that she seems to be developing more fairy tendencies via proximity. She also discovers that his grandmother has left her a diary, outlining the sources of her telepathy. It turns out that Mr Cataliades is responsible. He had ‘vetted’ Adele’s children and grandchildren (and clearly great-grandchildren if Hunter is any indication) and passed a ‘gift’ onto them.
On a related note, Sookie finds out that Terry has been spying on her for the fairies.
Pam forces Eric to reveal a secret to Sookie. Ocella had arranged a marriage with a vampire queen for Eric. Despite Ocella dying and his marriage to Sookie, Eric may be forced to go through with it. He hadn’t wanted to tell Sookie because of all her trauma but mostly because he still doesn’t get what the point of a relationship is.
He ain’t alone in that. Sookie has been reaching out to Amelia in New Orleans; seeking a way to challenge the blood tie. Amelia has found something that might work. In her usual impetuous manner, she insists on trying right away. Sookie agrees and instantly knows that the spell has worked. Unlike Eric, Sookie realises that she’s behaved in a high handed manner and reaches out to Eric. Though their relationship has been damaged and this now opens her up to other vampires. However, they affirm their love and decide to tackle the future together. While still being partially livid with each other.

Despite being all happy ever after in the last book, Bill reveals that he still loves Sookie. His actual girlfriend overhears – which he intended – again. And dumps his ass. Again.
Merlott’s get firebombed & Sookie thinks that she sees a shadow in the background. The police think that it’s related to his being a were, but Sam reveals to Sookie that business was being affected prior to that anyway. Sookie discovers that Victor has opened a bar close by. He is challenging Eric’s holdings and decided to include Sam as Sookie works for him. Sookie and Eric know that they must take him out. They plot and plan and as per usual there is a big show down at the end of the book. It’s bloody and violent and nasty.
Victor wins and kills them all. Just kidding. Eric and Pam lead their vampires to a glorious victory. That could spell doom for them in the next book.
***** 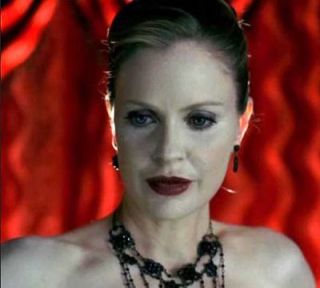 I think I might have to do the Family Guy ‘It’s a Trap’ opening here. I’ve totally run out of steam, I’m tired, my feet hurt and I need a coffee (wow, how much like an OAP do I sound?!?!). It’d probably be a bit easier if the book didn’t read like Charlaine Harris feels the same way I do.

It’s becoming more and more obvious that there was no over-riding arc; no plan from the start. Characters are up and down, hot and cold, often within the space of a single paragraph. It’s especially obvious with Bill. He went from the epic good guy, to evil bastard, to moapy cling-on, to happy ever after with the blast from the past to moapy cling-on again. After reaching a sort of point of natural resolution in the last book, he promptly changes his mind – tells Sookie within Judith hearing (deja vu much) and goes back to being a total drip about the whole thing. Could someone please just stake him and have it take? Please? For me?

The fairy stuff and origin of Sookie’s telepathy was actually fascinating, but goes back to the whole absolutely no plan argument. I’m fairly certain that Mr Cataliades was there at the hotel. I’m also fairly certain that he’d have been in real trouble if Sookie hadn’t warned him. At no point during the earlier books has he ever appeared to recognise Sookie or indeed give a crap about her. So it’s a nice idea, but I’m not buying into it.
I feel the same way about Dermot and Claude. They seem to be in it, but mostly to move the plot along. I’m also not entirely clear on why Sookie keeps them about given that she can’t trust them. They will kill for her, but they’ll probably also kill her if the wind blows this way.

Eric being forced into marriage was actually pretty interesting. It’s clear that this is going to be the main story for book 12. However, telling Sookie just because Pam forces him into it is pretty low. At what point is he actually going to respect her enough to just trust her? Mind you, that blade goes in both directions. Sookie and Amelia removed the blood bond without ever thinking for a second that Eric might notice. At least Sookie did her best to rectify the situation and finally came to terms with the fact that she cares about Eric. She, herself…with no supernatural aids. I hated Eric for being such a dick about it though. Drinking from Sookie is such a violent makes him a knob, but at least he has never pretended not to be. 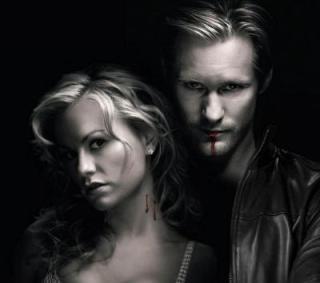 Amelia. Oh dear saints, why? Just WHY? Why on earth was this wreck of a 2D character ever dreamed up? In this book, she goes from stupid, annoying and thoughtless to a disingenuous danger to Sookie. Her big mouth has been the source of much complication pretty much from her first appearance, but in this book she seems to go out of her way to cause trouble for Sookie. Her blabbering to every person than she meets about Sookie’s whereabouts, emotional state, romantic situation is just so very very wrong. Thankfully Sookie has finally developed some spirit and I did actually whoop aloud when she basically tells Amelia she’s a bad friend and to get stuffed. About bloody time.

Sam? Alcide? Still about, still sniffing after Sookie, despite her making it clear that she isn’t interested.  Seriously, I’m sure that Harris intends to make them honourable and loyal, but really, they are becoming the wettest drips in creation. Self respect man, they need to look into it.

I’ve read there are only two more books in the series, so I’ll read till the end, but I’m losing hope. At this point, it could be a Dallas dream sequence and that would be less disappointing than what I’m imagining.