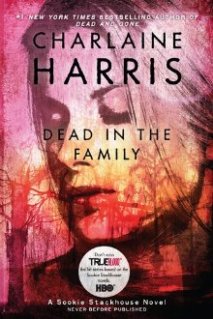 If this were an episode of Friends, it would be described as ‘the ones with the families’.  Actually that sounds a bit like a mafia story…which also fits.

Sookie is slowly recovering from her torture at the hands of evil fairies Lochlan and Neave (grrr). Eric and she are finally involved in a proper relationship, though her experiences have had a lasting impact in how she reacts to the world. She has lost some of her trust in people and become far more pragmatic (with hints of cold practicality and a flavour of self pity).
Her cousin Claude – one of the last remaining fairies on this plane- has decided to move in with her, ostensibly to protect her, despite having treated her with something approaching contempt thus far. Despite his newly protective air; he is keeping many secrets from Sookie, particularly in relation to the fairies hiding in the forest behind her house.

Sookie seems to have finally mended her relationship with Jason, who seems to be in a stable relationship with Michele – a far more sold sort than his usual type. She is also spending time with her cousin Hunter, teaching him about his telepathy, babysitting him at her house.

Bill is very ill and does not seem to be recovering from his encounter with L & N in the previous book. Discovering that only the blood of another created by his sire will cure him; Sookie becomes the rescuer rather than the victim for a time – somewhat forcing him to accept the cure. She is also rather pleased to discover that Bill has long had repressed feeling for his blood-sibling Judith – who had herself been turned by Lorena due to her resemblance to Bill’s wife in life. It looks as though the pair will finally able to be friends; both happy with their chosen loves.
Our intrepid heroine has finally admitted to being in love with Eric, though she still blames the blood bond for it. In one of her rare decent scenes, Amelia points out that Sookie is still hiding behind excuses. Either she loves him or she wants out of the bond. Sookie takes it on board but decides to become completely and utterly focused on sex with Eric rather than face up to her feelings for him – though there are a few rather sweet moments between the two of them.

In a way it’s almost a relief when Eric’s maker – Ocella – and sibling-by-blood Alexei (a Romanov. No, really, an actual heir to the Romanov destiny) – who is completely bonkers after watching the brutal murders of his entire family during the Bolshevik Revolution – drop by for an unexpected visit. Ocella is hoping that Eric can help him restore sanity to the young vampire. Sookie is disgusted by the clearly sexual relationship between sire and damaged youth; and decides pretty early on that Ocella will have to be destroyed – an idea which Eric rationally accepts but cannot bear to think on.
In other vampiric news; Eric’s new King has sent a manager – Victor – to monitor operations. Seeing the threat that he poses to Eric, Sookie decides that he too will have to die; though she is quite uncomfortable with the idea of cold-blooded murder (Ocella being a paedophile clearly outweighs that concern for her).

The weres are convinced that the governement is monitoring them – particularly when there is talk of a registration system, to keep track and possible restrict them. Sam and Calvin struggle to retain their social position after ‘coming out’. For no good reason whatsoever, Alcide also shows up, primarily to express his distaste as Sookie’s relationship status. Oh yeah, there is also a dead were found on Sookie’s property. Sookie does her best to prevent the weres from tearing themselves apart, but the only ultimate point of interest is that, once again, she doesn’t really approve of Sam’s new girlfriend – Alcide’s bloodthirsty second in command.

A fairy – Coleman – has been stalking Sookie – determined to kill her for her part in Claudine’s death. Claudine had been carrying his child and he has gone a bit mad. Seeing Sookie with Hunter changes his mind – no one that good with children deserves to die yadda yadda.

Ultimately, the disparate stories converge at Sookie’s house. Alexei has been indiscriminately killing and Eric is forced to put him down. Coleman kills Ocella while on the hunt for Sookie and is promptly killed by Eric, ever the knight in shining albeit bloodstained armour. It turns out that Dermot – the fairy who could be Jason’s twin – has been wandering around Sookie’s house. He had been bewitched to be evil. Now that the bad fairies are dead; he is struggling to come to terms with his past. Sookie and Claude break the spell and decide to keep him about to help him and he promptly moves into the Stackhouse homestead.

What a mess!
While I enjoyed aspects of the story, this book doesn’t seem to fit with the series as a whole. Characters behaved very oddly given their past behaviour and I couldn’t see any reason for Alcide to be brought back. It was good to have some resolution with Bill and Jason. Hopefully both shall remain happy with their respective partners…but I doubt it.

It was lovely having Hunter hanging around – especially as it returned the focus to the telepathy, even if just for a few conversations. I’ve always enjoyed the story best when Sookie explores the limits of her abilities, or utilises her telephathy just when everyone around her has forgotten all about it! He’s also just a fun little kid, difficult not to warm too!

It also annoyed me that everyone from Pam to Ocella warned Sookie that her relationship with Eric was doomed. It seemed a very unnecessary add on. Her life has been so traumatic so far – why would any reader assume it would all be smooth sailing? For those of us who’ve been waiting for the two of them to gettogether, it was a bit of a kick in the teeth. We don’t even get a book to enjoy the pairing before it becomes quite clear that Harris is unwilling for the two to stay together.
At this point, I’m guessing that Sam is to be her ultimate partner – there is just no other explanation for his ongoing presence.

Pam continues to be woefully underused. She gets all the best lines. I for one want to see her take centre stage at some point before the series ends.

Amelia is gone. BEST BOOK EVER for that alone.

Tara and Hadleigh are both pregnant. So, in the last book two expectant supernaturals are both killed and in this one two humans seem to be ensured of carrying to term. Hmmm…coinkidink? I think not.

Ultimately, not a great book, but at least it answered more questions than it raised.