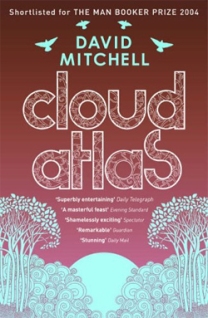 I’m afraid this won’t be the most detailed of summaries – I’ve left it a little long, the notes I’ve made aren’t providing me with as much information as I’d hoped!

In general, this was quite a successful book for us, particularly the first and final stories (though one particular member did crack us all up by shouting ‘NO EPIC BITCH’).

As a club, we liked the way the stories bled into one another – manuscript, unread letters –  feeling that the author knew how to affect different styles. The set up felt a little like a dirty Narnia – a wood between the worlds – allowing access to stories and places that seem to be totally separated and divided, with intangible links (particularly Timothy Cavendish who reminded us all of the faun).

It’s a book that inspired strangers on the bus and train to come up and tell us exactly what they thought of it – good or bad – and despite the fact that we didn’t want to be interrupted!!

We felt that there were a number of important themes – we wanted to laugh and cry, often simultaneously. Details like the phrases tattooed on the body – ‘ascend above orientation’ – were very effective, though it’s fair to say that there were some that found this opening story a bit depressing.

Lusia Ray (and the whole middle section) was a more divisive story. While some found it a bit predictable; another member said that she found that she struggled to pay attention to the middle stories as she was more interested in reaching the conclusion to the previous tales.

One of the characters that all but one seemed to love was Frobisher, who was both brilliant and ridiculous in equal parts.

In general we really enjoyed it, though one member felt that it was both unspeakably sad and inaccessible – a bit of a ‘look at me, I’m reading this and I’m so literary’ book, making them want to bash their head against a wall on occasion.

The Verdict
8/10 (just over actually)
Next Book Choice!

Agreed on: Soulless by Gail Carriger

Suggestions!
I do have these in an envelope carefully placed somewhere in the house. As soon as I find them, I’ll add them here! (More likely I’ll stick the whole lot of them into a slide show and add them somewhere in the blog!)
Cake
Once again, we were provided with a delicious cake by the ever sweet BOOKELF – lemon this time.
Should you wish to try this yourself, please head to the ‘Sweet Tooth’ section for the recipe!