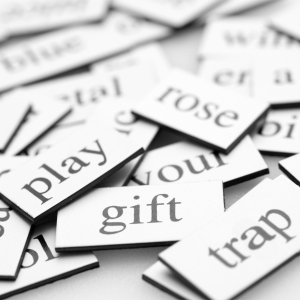 Lenten Poetry ChallengeAs the poetry corner needs a little bit of tweaking (read it’s broken waaa!!!) I thought it might be as well to have a more permanent record of the poems I’ve read over the Lenten period, broken into handy little bite sized pieces*.
Monday Lent Poem 5
Travelling North
Helen Mort
with a borrowed rucksack,
an empty hip flask stowed
on the table to spare me
conversation, I am carried
at speeds no longer thought
remarkable. The carriage
moves through flanks
of brick or lucent woods
where banks formed walls
before we even dreamt
of fences, through scrap yards
and outskirts, blanked
by windows where kids once
gathered to chuck apple cores,
through the backs of new estates,
where egg-box houses
press the tracks between them,
and the flowerbeds
are furled, red handkerchiefs
for bidding leave – I wish
I knew how many of us
have passed through home
this way; close-mouthed,
fast, crossing the street to dodge
old friends we’re in no mood for.
The town’s retreat, that glimpse
of shoulder blade through doorway,
the craned necks of the beech trees
and beside it all,
our colour supplements,
the studied backs of hands,
a woman cradling
her mobile phone,
struggling to catch
some parting word
who only says
I’m losing you,
I’m –
Sunday Lent Poem 4
The Shadow Doll
Eavan Boland 1990
(This was sent to the bride-to-be in Victorian times, by her dressmaker. It consisted of a porcelain doll, under a dome of glass, modelling the proposed wedding dress.)
They stitched blooms from ivory tulle
to hem the oyster gleam of the veil.
They made hoops for the crinoline.
Now, in summary and neatly sewn —
a porcelain bride in an airless glamour —
the shadow doll survives its occasion.
Under glass, under wraps, it stays
even now, after all, discreet about
visits, fevers, quickenings and lusts
and just how, when she looked at
the shell-tone spray of seed pearls,
the bisque features, she could see herself
inside it all, holding less than real
stephanotis, rose petals, never feeling
satin rise and fall with the vows
I kept repeating on the night before —
astray among the cards and wedding gifts —
the coffee pots and the clocks and
the battered tan case full of cotton
lace and tissue paper, pressing down, then
pressing down again. And then, locks.
Saturday Lent Poem 3
A Prodigal
Elizabeth Bishop 1951
The brown enormous odor he lived by
was too close, with its breathing and thick hair,
for him to judge. The floor was rotten; the sty
was plastered halfway up with glass-smooth dung.
Light-lashed, self-righteous, above moving snouts,
the pigs’ eyes followed him, a cheerful stare–
even to the sow that always ate her young–
till, sickening, he leaned to scratch her head.
But sometimes mornings after drinking bouts
(he hid the pints behind the two-by-fours),
the sunrise glazed the barnyard mud with red
the burning puddles seemed to reassure.
And then he thought he almost might endure
his exile yet another year or more.
But evenings the first star came to warn.
The farmer whom he worked for came at dark
to shut the cows and horses in the barn
beneath their overhanging clouds of hay,
with pitchforks, faint forked lightnings, catching light,
safe and companionable as in the Ark.
The pigs stuck out their little feet and snored.
The lantern–like the sun, going away–
laid on the mud a pacing aureole.
Carrying a bucket along a slimy board,
he felt the bats’ uncertain staggering flight,
his shuddering insights, beyond his control,
touching him. But it took him a long time
finally to make up his mind to go home.
Friday Lent Poem 2
Twice Shy
Seamus Heaney 1965
Her scarf a la Bardot,
In suede flats for the walk,
She came with me one evening
For air and friendly talk.
We crossed the quiet river,
Took the embankment walk.
Traffic holding its breath,
Sky a tense diaphragm:
Dusk hung like a backcloth
That shook where a swan swam,
Tremulous as a hawk
Hanging deadly, calm.
A vacuum of need
Collapsed each hunting heart
But tremulously we held
As hawk and prey apart,
Preserved classic decorum,
Deployed our talk with art.
Our Juvenilia
Had taught us both to wait,
Not to publish feeling
And regret it all too late –
Mushroom loves already
Had puffed and burst in hate.
So, chary and excited,
As a thrush linked on a hawk,
We thrilled to the March twilight
With nervous childish talk:
Still waters running deep
Along the embankment walk.
Thursday Lent Poem 1
Ode
Arthur O’Saughnessy 1874
WE are the music-makers,
And we are the dreamers of dreams,
Wandering by lone sea-breakers,
And sitting by desolate streams;
World-losers and world-forsakers,  5
On whom the pale moon gleams:
Yet we are the movers and shakers
Of the world for ever, it seems.
With wonderful deathless ditties
We build up the world’s great cities, 10
And out of a fabulous story
We fashion an empire’s glory:
One man with a dream, at pleasure,
Shall go forth and conquer a crown;
And three with a new song’s measure 15
Can trample an empire down.
We, in the ages lying
In the buried past of the earth,
Built Nineveh with our sighing,
And Babel itself with our mirth;          20
And o’erthrew them with prophesying
To the old of the new world’s worth;
For each age is a dream that is dying,
Or one that is coming to birth.
*PLEASE DO NOT ATTEMPT TO BITE YOUR COMPUTER. YOU WILL BE THE WORSE OFF!!