Just wanted to let anyone heading down south know that the superb production of The Kite Runner is currently running in the West End!

Visit the Wyndham’s Theatre website HERE to get all the details on how to catch this very impressive production.

‘For you…a thousand times over…’

Afghanistan, 1975: Twelve-year-old Amir is desperate to win the local kite-fighting tournament and his loyal friend Hassan promises to help him. But neither of the boys can foresee what will happen to Hassan that afternoon, an event that is to shatter their lives. After the Russians invade and the family is forced to flee to America, Amir realises that one day he must return to Afghanistan under Taliban rule to find the one thing that his new world cannot grant him: redemption. 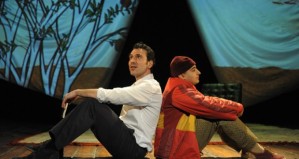 This should be an impossible book to adapt. Afghanistan is a changing place in 1975. Religion and politics are evolving the landscape further. It is in this background that two boys attempt to navigate their path, which happens to be an emerging family tragedy. The book covers a span of 30 years. That Matthew Spangler succeeds and succeeds beautifully  in distilling the essence of this tale into a mere two acts – well it ought to be an impossible feat.

On a sparse stage, populated only by a musicians mat; a flowing backdrop and a carpet with a thousand interpretations; an intensely emotional story unfolds. The lack of clutter, heck, the near disdain of props merely served to emphasis the interpersonal focus of this play.

The hero of this production has to be Ben Turner. Aside from being the only constant presence on the stage; he manages to pull off a difficult task with aplomb. At no point is he ever in denial that he is portraying Amir as a deeply flawed person – indeed for much of the play the character appears to be cowardly, unlikeable with few redeeming features. He flies a kite, embodying enthusiastically a 12 year old and brings equal weight to his reflection as an older narrator. However, as time passes, Ben makes the audience aware of something that Amir never quite realises. He is as much a victim (albeit to a far lesser degree) of Assef’s violence as Hassan and certainly of his father’s coldness and – as becomes apparent – lies.

In a stellar cast of consummate professionals – it is impossible to understate the menace that Nicholas Karimi brings to the bully Assef. From the second he appears, spitting out insults and swaggering a la John Wayne; he dominates and intimidates. His interactions with Andrei Costin (in the dual role of Hassan and Sohrah) in particular are just harrowing.

One of the most lovely and touching aspects of a play that confirms, defies and compounds expectations (frequently in the same passage of dialogue!) is a character that emerges intact from the pages of the book. The sole (significant) speaking female role is that of Soraya, portrayed by Lisa Zahra. Though she only appears in the later sections of the play; she is the most honest and brave character – following her heart and owning her mistakes. On a male dominated stage; her every interaction with Amir is refreshing and cleansing – not necessarily what one is led to expect from a story set mostly in Taliban ruled Afghanistan.

The music throughout the play plays a powerful role and is primarily provided by Hanif Khan; an internationally renowned classically trained Indian musician and performer, who – like Ben Turner – remains on stage for the bulk of the performance. The melodies he provides both inform the story and provide emotional context. The music and sounds created by the cast provide an atmospheric backdrop; at once unobtrusive yet pervasive. A constant and haunting refrain throughout that serves as a reminder that while the story may be set in lands far away; the ultimate search for redemption is a universal one. That the sheer act of being human makes us strive to better ourselves, to make up for those things that we have done wrong, to seek to make amends…even when it is too late.

The Kite Runner at the West Yorkshire Playhouse