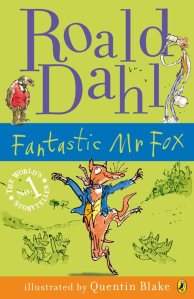 “In the tradition of The Adventures of Peter Rabbit, this is a “garden tale” of farmer versus vermin, or vice versa. The farmers in this case are a vaguely criminal team of three stooges: “Boggis and Bunce and Bean / One fat, one short, one lean. / These horrible crooks / So different in looks / Were nonetheless equally mean.” Whatever their prowess as poultry farmers, within these pages their sole objective is the extermination of our hero–the noble, the clever, the Fantastic Mr. Fox. Our loyalties are defined from the start; after all, how could you cheer for a man named Bunce who eats his doughnuts stuffed with mashed goose livers? As one might expect, the farmers in this story come out smelling like … well, what farmers occasionally do smell like.

This early Roald Dahl adventure is great for reading aloud to three- to seven-year-olds, who will be delighted to hear that Mr. Fox keeps his family one step ahead of the obsessed farmers. When they try to dig him out, he digs faster; when they lay siege to his den, he tunnels to where the farmers least expect him–their own larders! In the end, Mr. Fox not only survives, but also helps the whole community of burrowing creatures live happily ever after. With his usual flourish, Dahl evokes a magical animal world that, as children, we always knew existed, had we only known where or how to look for it.” – Amazon.co.uk 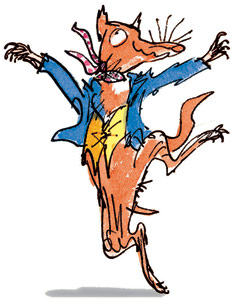 Roald Dahl was a British novelist, short story writer and screenwriter of Norwegian descent, who rose to prominence in the 1940’s with works for both children and adults, and became one of the world’s bestselling authors. read more at Goodreads.com
My review
*spoilers* *spoilers**spoilers*
Opening line:

“Down in the valley there were three farms. The owners of these farms had done well. They were rich men. They were also nasty men. All three of them were about as nasty and mean as any men you could meet. Their names were
Farmer Boggis, Farmer Bunce and Farmer Bean.” 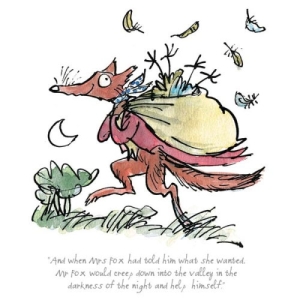 Since I started these challenges and running LBCPuffins, I do wonder why a book is a certain length and why as adults certain fiction books have to have so much information in it to tell a story. Obviously a kids book couldn’t necessarily be 300 pages long, the child would get bored, but why can’t we have short to the point fiction books for adults like fantastic mr fox is?
These days I wonder if books are just written for the purpose that  it might be turned into a film one day, rather than it just being a book and the words never leaping to screen. Books provide us with small or large worlds which we can absorb ourselves in and escape from our daily chores.

Boggis, Bunce, and Bean one fat, one short, one lean. Those horrible crooks so different in looks are nonetheless equally mean. 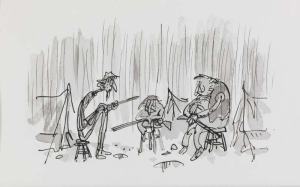 I read this book in one sitting and loved every minute. I may have read this when I was younger as it seemed so  familiar but it could also be Dahl’s style of writing that makes me believe that.  We begin this story with three farmers who all very rich and have very different personalities, however they are all outwitted by the marvelous Fantastci Mr Fox and plot to get rid of him.
One day the farmers decide that they will sit outside the hole of the 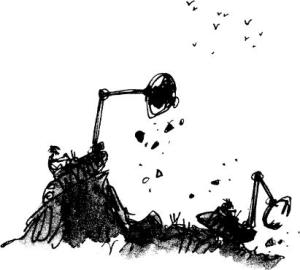 fantastic Mr Fox and finish him once and for all. Of course Mr Fox is quite cunning and after finding the farmers digging down into their home the foxes start off on an adventure to save their skins and tiumph over the famers once and for all.
When I researched this book, there was a lot of questions asked about the moral of stealing. I was slightly shocked and the depth in which some of the articles had about this book. Surely it’s a children’s book to be loved and enjoyed.

I thought it showed teamwork and friendship and how different animals pulled together to beat their mutual enemy the farmers. The feast at the end was such a lovely picture, again illustrated by Quentin Blake, the black and white ink drawings hold as much suspense and Rolad Dahl’s writing. Another lovely marriage.
This book should be loved and enjoyed as a children’s book, a one to read to the little ones before bed. Not as something that is seen to teach them bad ways like some suggest. I recommend whther you have children or not to grab a copy and cheer on Fantastic Mr Fox as it one of the most fun reads I have had in ages.