“Armageddon only happens once, you know. They don’t let you go around again until you get it right.”

According to the Nice and Accurate Prophecies of Agnes Nutter, Witch – the world’s only totally reliable guide to the future, written in 1655, before she exploded – the world will end on a Saturday. Next Saturday, in fact. Just after tea…

People have been predicting the end of the world almost from its very beginning, so it’s only natural to be sceptical when a new date is set for Judgement Day. This time though, the armies of Good and Evil really do appear to be massing. The four Bikers of the Apocalypse are hitting the road. But both the angels and demons – well, one fast-living demon and a somewhat fussy angel – would quite like the Rapture not to happen.

And someone seems to have misplaced the Antichrist… 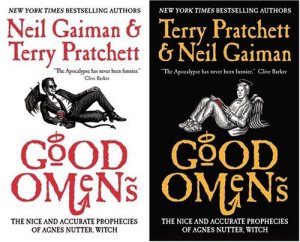 In the past I may have mentioned that, every now and again, book club meetings can descend into a sort of hazy chaotic madness. A wondrous, fun and exciting journey into the conversationally dodgy that make for a wonderfully entertaining few hours…but are impossible to ever write up.

Before we were all even sat down, we had entered a strange and surreal zone where poster tubes and …sex toys…were leading towards some proper deep confusion. Note to self – when referencing swinging one round like a light saber- specify which for any persons not quite caught up.

We did try to get back on track and spent oh… at least a solid moment on footmarks. One person was totally irritated by them (though hadn’t remembered being so bothered by them in the past) while another enjoyed the sense of historical authenticity that this brought to a very ridiculous book. It turned out that only one of the group hadn’t read the book at all; two were reading the book for the first time while the remaining 11 clubbers were revisiting the book, some for the nth time.

After a brief segue into Harry Potter (and the misprint that has the spirits come out of the wand in the wrong order) we valiently returned to our stated purpose and discussed the approach that the two authors had while approaching this book,based on Gaiman’s original concept. We learned that originally, the idea had been for a Just William style set of stories, where William was the anti-Christ. Short story writers – get on that – this is exactly the sort of book that I would read and love! This was Neil Gaiman’s first novel. It’s hard to imagine now a time when he wasn’t the twitter rock star of the author set, but it must have been quite a risk for Terry Pratchett too. We admired that neither writer shied away from the truly surreal within this book. They obviously decided to write whatever they wanted and the book is stronger for all its resultant strangeness. (Except the aliens – that drove one of us scatty. Though we all liked the Tibetans…who wouldn’t?)

Fans on either side reflected on how each author has changed and evolved as a writer since 1990 and so the book would be very different if it happened now. (One of us noted that Gaiman had come full circle and is back to this level of whimsical fairytale again) We also wondered what form, if any, a sequel could have taken.

Then there was bedlem for a bit. At this point, I still had hope so I didn’t make a note of what it was that distracting us at that precise moment.

One brave member stood out from the crowd and revealed that nothing about the book really ever drew him in – it just wasn’t a book that he found particularly enjoyable. Another noted that she found it less enjoyable this time than she had in the past. Those of us who had enjoyed the book reflected a bit further and one member revealed that she read it much as someone would go for comfort food. She didn’t read it expecting it to reveal anything new, rather she reads it to find something familiar.

We wandered off course for a bit again, before reluctantly discussing some of the characters. We tended towards loving  Crowley and Aziraphale, with one member revealing that she saw them as the ultimate civil servants. Realistically, neither role significantly changes regardless of which side is on top – they epitomize apathy towards the system. The Biker Gang divided the group. Some very much liked them (especially as they chose their names) while others found them to be the weak link. Actually, it was the same with the Horsemen of the Apocalypse. We loved the descriptions (and replacement member) but they felt like mere descriptors rather than truly playing a pivotal role. One noted that this was Pratchett’s weakest version of Death, but I personally enjoyed the idea of a slightly shit Death. He doesn’t need to be competent, he will never lose. Everyone dies. We loved Agnes, Anathema Device and her ‘love’ story was hilarious. We agreed that characters were one of Pratchett’s strengthens and noted her similarities with Death’s goddaughter in the Hogfather and what’s her name from Going Postal – Adora.

Then we wandered into ancient english fonts and languages and names. It was barely relevant but probably the closest that we came for the remainder of the hour. We went wild again. My suggestions that we discuss the book were met with blank stares and continued mini-group chats. I don’t think we actually managed to return to the book at all.

By the time that we were about ready to score the books, the table had descended into utter chaos, with a few of the group discussing the upcoming STARZ series of American Gods and their ideal casting suggestion. Using my imaginary authority, I insisted on taking the scores…then left before that conversation picked up again. I think we know who the real loser in this situation was. 😦

The Beeb has released a really terrific audio version of the book (which at least one of our group really didn’t enjoy as the actors voices didn’t match up with his imagined voices…and he read the books years ago…).

The cast is lead by Peter Serafinowicz and Mark Heap as Crowley and Aziraphale. Both of the authors have a brief cameo.

Personally, I really enjoyed this (but I didn’t read this back in the 90’s, I only discovered this gem over Christmas) and would highly recommend it.

The Pub can be contacted on @WhiteSwanLeeds

And feel free to let us know your thoughts using #LBCWSwan!