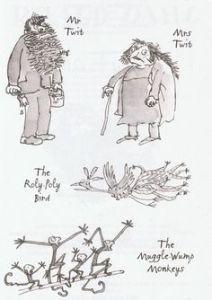 About the book
How do you outwit a Twit? Mr. and Mrs. Twit are the smelliest, ugliest people in the world. They hate everything — except playing mean jokes on each other, catching innocent birds to put in their Bird Pies, and making their caged monkeys, the Muggle-Wumps, stand on their heads all day. But the Muggle-Wumps have had enough. They don’t just want out, they want revenge.

Mr Twit hates his wife. Mrs Twit detests her husband. They like nothing more than playing wicked tricks on one another. Sooner or later, things are going to go too far…

Even in real life Roald Dahl was very suspicious of men with beards. He thought they must be hiding something sinister. Michael Rosen, who wrote a book called Fantastic Mr Dahl all about Roald and his stories, remembers that the first time he and Roald met, Roald told Michael’s son Joe that his beard was “disgusting.”

Mr Twit has a beard. His is dirty and has bits of food clinging to it. Quentin Blake’s illustrations in the original story show cornflakes, tinned sardines and even stilton cheese stuck in the bristles on Mr Twit’s face. In fact, he and his equally unlovely wife, Mrs Twit, are just about as horrible as can be – but there are a few characters who might just have found a way to outsmart this nasty pair…

The Twits, first published in 1980, may be about a pair of horrible twits, but it also features one of the most-quoted phrases in all of Roald’s books…

and a  piece from the Guardian here
About the Author

Roald Dahl was a British novelist, short story writer and screenwriter of Norwegian descent, who rose to prominence in the 1940’s with works for both children and adults, and became one of the world’s bestselling authors. read more at Goodreads.com

My review
What a great opening line – “What a lot of hairy-faced men there are around nowadays.”.  What a funny little story. I wasn’t sure what to make of this. two people who are married making war with each other. How peculiar. I think this was one of my Sister’s favourites, but I’m not sure.  Like Roald Dahl I don’t like beards. I don’t know why but it’s always stuck with me. In this case it’s of a man who apparently was born a twit who likes to play tricks on his wife and vice versa. There’s also, I hate to say it a touch of bullying and animal cruelty in it, but in the end the animals are smarter than the Twits and get their revenge and head back home to Africa.
I’ve not got much to say on this one but after a little research I found it was for 5-8 years olds so thats probably why it’s such quick paced and you could say to the point. Brilliant descriptions on the characters, so strong that you come to hate them and shout hooray! when the animals seek their revenge.

“So what I want to know is this. How often do all these hairy-faced men wash their faces? It is only once a week, like us, on Sunday nights? And do they shampoo it? Do they use a hair-dryer? Do they rub hair-tonic in to stop their faces from going bald? Do they go to a barber to have their hairy faces cut and trimmed or do they do it themselves in front of the bathroom mirror with nail-scissors?”

It’s a lovely book with fantastic illustrations from Quentin Blake and a beautiful tale by Roald Dahl. I can see why every one is so fond of him. He creates fantastic characters, There appears to be hidden morals in the stories perhaps only picked up later in life when we re-read them, and most of all they are a light-hearted read.
I think you should go pick up a book now and see what I mean.

And I leave you with this:
“If a person has ugly thoughts, it begins to show on the face. And when that person has ugly thoughts every day, every week, every year, the face gets uglier and uglier until you can hardly bear to look at it. A person who has good thoughts cannot ever be ugly. You can have a wonky nose and a crooked mouth and a double chin and stick-out teeth, but if you have good thoughts it will shine out of your face like sunbeams and you will always look lovely.”
Thank you for reading
xxx

Visiting the ‘smugglers adventure’ in #Hastings yesterday. #Caves
Yesterday, out for a cycle. Check out those blue skies! Bliss!
Seen in its natural habitat, the wild woods of #KirkstallAbbey
#KirkstallAbbey
Thought this was lovely
Loading Comments...
%d bloggers like this: