If you would like to join in with the Anne Frank #NotSilent campaign, there are a selection of choices available here – replicated below. 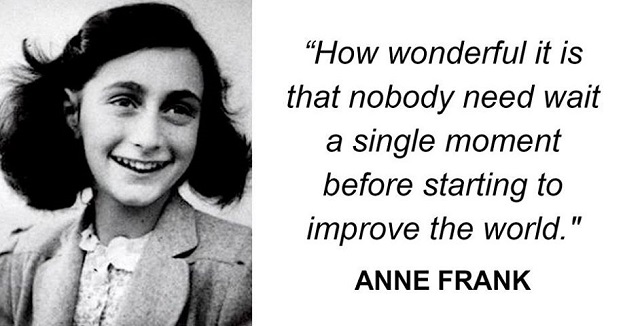 “I need to have something besides a husband and children to devote myself to! I don’t want to have lived in vain like most people. I want to be useful or bring enjoyment to all people, even those I’ve never met. I want to go on living even after my death! And that’s why I’m so grateful to God  for having given me this gift, which I can use to develop myself and to express all that’s inside me!
When I write I can shake off my cares. The sorrow disappears, my spirits are revived! But, and that’s a big question, will I ever be able to write something great, will I ever become a journalist or a writer?
I hope so, oh, I hope so very much, because writing allows me to record everything, all my thoughts, ideals and fantasies.”

“I’m becoming more and more independent of my parents. Young as I am, I face life with more courage and have a better and truer sense of justice than Mother. I know what I want, I have a goal, I have opinions, a religion and love. If only I can be myself I’ll be satisfied. I know that I’m a woman, a woman with inner strength and a great deal of courage!
If God lets me live, I’ll achieve more than Mother ever did, I’ll make my voice heard, I’ll go out into the world and work for mankind!
I now know that courage and happiness are needed first.”

“I’ve often been down in the dumps, but never desperate. I look upon our life in hiding as an interesting adventure, full of danger and romance, and every privation as an amusing addition to my diary. I’ve made up my mind to lead a different life from other girls, and not to become an ordinary housewife later on. What I’m experiencing here is a good beginning to an interesting life, and that’s the reason – the only reason – why I have to laugh at the humorous side of the most dangerous moments.
I’m young and have many hidden qualities; I’m young and strong and living through a big adventure; I’m right in the middle of it and can’t spend all day complaining because it’s impossible to have any fun! I’m blessed with many things: happiness, a cheerful disposition and strength. Every day I feel myself maturing, I feel liberation drawing near, I feel the beauty of nature and the goodness of the people around me. Every day I think what a fascinating and amusing adventure this is! With all that, why should I despair?”

“We’re much too young to deal with these problems, but they keep thrusting themselves on us until, finally, we’re forced to think up a solution, though most of the time our solutions crumble when faced with the facts. It’s difficult in times like these: ideals, dreams and cherished hopes rise within us, only to be crushed by grim reality. It’s a wonder I haven’t abandoned all my ideals, they seem so absurd and impractical. Yet I cling to them because I still believe, in spite of everything, that people are truly good at heart.
It’s utterly impossible for me to build my life on a foundation of chaos, suffering and death. I see the world being slowly transformed into a wilderness, I hear the approaching thunder that, one day, will destroy us too, I feel the suffering of millions. And yet, when I look up at the sky, I somehow feel that everything will change for the better, that this cruelty too will end, that peace and tranquillity will return once more. In the meantime, I must hold on to my ideals. Perhaps the day will come when I’ll be able to realize them!”

“As you can no doubt imagine, we often say in despair, ‘What’s the point of the war? Why, oh, why can’t people live together peacefully? Why all this destruction?
The question is understandable, but so far no one has come up with a satisfactory answer. Why is England manufacturing bigger and better aeroplanes and bombs and at the same time churning out new houses for reconstruction? Why are millions spent on the war each day, while not a penny is available for medical science, artists or the poor? Why do people have to starve when mountains of food are rotting away in other parts of the world? Oh why are people so crazy?
I don’t believe the war is simply the work of politicians and capitalists. Oh no, the common man is every bit as guilty; otherwise, people and nations would have rebelled long ago! There’s a destructive urge in people, the urge to rage, murder and kill. And until all of humanity, without exception, undergoes a metamorphosis, wars will continue to be waged, and everything that has been carefully built up, cultivated and grown will be cut down and destroyed, only to start all over again.”

“One of the many questions that have often bothered me is why women have been, and still are, thought to be so inferior to men. It’s easy to say it’s unfair, but that’s not enough for me; I’d really like to know the reason for this greatest injustice! Men presumably dominated women from the very beginning because of their greater physical strength; it’s men who earn a living, beget children and do as they please… Until recently, women silently went along with this, which was stupid, since the longer it’s kept up, the more deeply entrenched it becomes. Fortunately, education, work and progress have opened women’s eyes. In many countries they’ve been granted equal rights; many people, mainly women, but also men, now realize how wrong it was to tolerate this state of affairs for so long. Modern women want the right to be completely independent!

“In the evenings when it’s dark, I often see long lines of good, innocent people accompanied by crying children, walking on and on, ordered about by a handful of men who bully and beat them until they nearly drop. No one is spared. The sick, the elderly, children, babies and pregnant women – all are marched to their death.
We’re so fortunate here, away from the turmoil. We wouldn’t have to give a moment’s thought to this suffering if it weren’t for the fact that we’re so worried about those we hold dear, whom we can no longer help. I feel wicked sleeping in a warm bed, whilst somewhere out there my dearest friends are dropping from exhaustion or being knocked to the ground.
I get frightened myself when I think of close friends who are now at the mercy of the cruellest monsters ever to stalk the earth.
And all because they’re Jews.”

“People who are religious should be glad, since not everyone is blessed with the ability to believe in a higher order. You don’t even have to live in fear of eternal punishment; the concepts of purgatory, heaven and hell are difficult for many people to accept, yet religion itself, any religion, keeps a person on the right path. Not the fear of God, but upholding your own sense of honour and obeying your own conscience. How noble and good everyone can be if, at the end of each day, they were to review their own behaviour and weigh up the rights and wrongs. They would automatically try to do better at the start of each new day and, after a while, would certainly accomplish a great deal. Everyone is welcome to his prescription; it costs nothing and is definitely useful. Those who don’t know will have to find out by experience that ‘a quiet conscience gives you strength’!”

“I have one outstanding character trait that must be obvious to anyone who’s known me for any length of time: I have a great deal of self-knowledge. In everything I do, I can watch myself as if I were a stranger. I can stand across from the everyday Anne and, without being biased or making excuses, watch what she’s doing, both the good and the bad. This self-awareness never leaves me, and every time I open my mouth, I think, ‘You should have said that differently’ or ‘That’s fine the way it is.’ I condemn myself in so many ways that I’m beginning to realize the truth of my Father’s adage: ‘Every child has to raise itself.’ Parents can only advise their children or point them in the right direction. Ultimately, people shape their own characters. In addition, I face life with an extraordinary amount of courage. I feel so strong and capable of bearing burdens, so young and free! When I realised this, I was glad, because it means I can more easily withstand the blows life has in store.”

“I looked out of the open window, letting my eyes roam over a large part of Amsterdam, over the rooftops and on to the horizon, a strip of blue so pale it was almost invisible.
‘As long as this exists’, I thought, ‘this sunshine and this cloudless sky, and as long as I can enjoy it, how can I be sad?’
The best remedy for those who are frightened, lonely or unhappy is to go outside; somewhere they can be alone, alone with the sky, nature and God. For then and only then can you feel that everything is as it should be and that God wants people to be happy amid nature’s beauty and simplicity.
As long as this exists, and that should be for ever, I know that there will be solace for every sorrow, whatever the circumstances. I firmly believe that nature can bring comfort to all who suffer.
Oh, who knows, perhaps it won’t be long before I can share this overwhelming feeling of happiness with someone who feels the same as I do.”

“Mr Bolkestein, the Cabinet Minister, speaking on the Dutch broadcast from London, said that after the war a collection would be made of diaries and letters dealing with the war. Of course, everyone pounced on m diary. Just imagine how interesting it would be if I were to publish a novel about the Secret Annexe. The title alone would make people think I was a detective story.
Seriously, though, ten years after the war people would find it very amusing to read how we lived, what we ate and what we talked about as Jews in hiding. Although I tell you a great deal about our lives, you still know very little about us. How frightened the women are during air raids…or how many epidemics are raging here.
You know nothing of these matters, and it would take me all day to describe everything down to the last detail.”

One thought on “Anne Frank – #NotSilent – Suggested One Minute Texts”