The year is 2033. The world has been reduced to rubble. Humanity is nearly extinct. The half-destroyed cities have become uninhabitable through radiation. Beyond their boundaries, they say, lie endless burned-out deserts and the remains of splintered forests. Survivors still remember the past greatness of humankind. But the last remains of civilisation have already become a distant memory, the stuff of myth and legend.

More than 20 years have passed since the last plane took off from the earth. Rusted railways lead into emptiness. The ether is void and the airwaves echo to a soulless howling where previously the frequencies were full of news from Tokyo, New York, Buenos Aires. Man has handed over stewardship of the earth to new life-forms. Mutated by radiation, they are better adapted to the new world. Man’s time is over.

A few score thousand survivors live on, not knowing whether they are the only ones left on earth. They live in the Moscow Metro – the biggest air-raid shelter ever built. It is humanity’s last refuge. Stations have become mini-statelets, their people uniting around ideas, religions, water-filters – or the simple need to repulse an enemy incursion. It is a world without a tomorrow, with no room for dreams, plans, hopes. Feelings have given way to instinct – the most important of which is survival. Survival at any price.

VDNKh is the northernmost inhabited station on its line. It was one of the Metro’s best stations and still remains secure. But now a new and terrible threat has appeared. Artyom, a young man living in VDNKh, is given the task of penetrating to the heart of the Metro, to the legendary Polis, to alert everyone to the awful danger and to get help. He holds the future of his native station in his hands, the whole Metro – and maybe the whole of humanity.

(NOTE – I’ve included a very long blurb to avoid even attempting to explain any aspects of the storyline in the write up because…bonkers. Giant worms, big birds and a blob monster…you see?)
Heading into our conversation; the consensus on twitter about this book can be summed up in the following image! 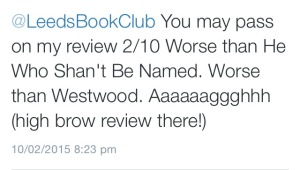 So I was a bit concerned that none of us would have finished it or have anything more to say than ‘not our thing’. However, that magical book club thing happened where despite only two people having finished the book; we had this brilliantly bonkers conversation about it. Unexpectedly one of our Neil’s – we have three – not that Neil; nope, not that one either – ACTUALLY FINISHED THE BOOK which was the first sign that we were onto something special. On the basis of this conversation, five out the seven of us who had started the book have decided to finish it – another reason that I won’t be including too much about the plot and storyline! 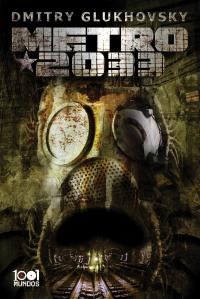 Now, there’s no denying, the vast majority of us found reading this book to be a bit of a trudge. It’s entirely possible that this is down to differing translated versions. All of us noted that the names of one character in particular actually changed in the first chapter but only a few of us found the spellings to vary from section to section. (One book clubber [yes, Neil, how did you guess?] found himself mentally converting the names of characters to anglesized versions – including Peter Andre, which did give us a bit of a giggle)

While some found the language to be convoluted, only one or two of us had versions that were downright nonsensical in places, with page long rants that decimated any sort of reading flow. Now, we are none of us wimpy readers – we’re pretty focused and usually manage to plough through a tale, even when it doesn’t grip us. However, this one required vigilance and time – far longer than we were expecting.

Structurally; each chapter was a mini-novella; with a beginning, middle and end. The main character would meet a person, hear their philosophy, travel a way down the metro with them, then leave them for a new station. A map was provided, but it didn’t make any sense in connection to the story; unsurprising as many of the scenes were possibly hallucinations. This formula was likened to Dan Brown as each chapter ended on a cliffhanger.

Neil (the other one, yes, that one) pointed out that the story was originally written in a serial format which made the formula outlined above make a bit more sense for us. Unfortunately, a side effect of this was that a lot of the plot was passed on via conversations – long winded rants about communism, fascism, fate, philosophy. Aside from anything else, this is a device that drives me scatty. Le sigh.

To further add to the confusion the names of the stations changed depending on who was talking, what political affiliation they adhered to and which map they were using. Because maps here were inaccurate…unless they were one of the ‘magic’ guides. Not a joke.

Could the Moscow Metro be as spacious as the book depicted? Turns out – it is!  Thanks to @EmmaJehan for checking up on that one.

The technology was a little inconsistent. On the one hand, light is a limited resource, only certain stations have clocks…but there are weapons of mass destruction and a plethora of Kalashnikov’s and cartridges/bullets for these. So many in fact that they can be used as currency. Also – if what I was hearing about the Dark Ones is true – 15 years doesn’t seem like a very long period of time – certainly not long enough to cause a new evolutionary form.

We almost all of us agreed that the idea, the central concept, was a fascinating one. The idea of the last remaining people having to go subterranean in order to survive an apocalyptic event was fascinating. The promise of mutants, elusive dark ones (hilariously Caucasian), musical pipes, a religion that orientates around a giant worm and an inconsistent narrator – through no fault of his own – all of these hint at a good yarn. It was slightly disappointing to discover that there is very little history around the event that drives them all underground. However, while all the ingredients are present in the universe created; the characters let it down.

It’s also interesting to note that while there is a direct sequel to this story; there are also related but separate tales written by other authors. This book was also turned into a game – which has a slightly different ending to this book – which seems to revolve mostly around shooting people. We all thought that the set up sounds very promising though the only one of us who had played it was a little less than impressed.

I asked whether anyone was listening to anything in particular while reading this book. One bright spark immediately shouted out The Jam – Underground. However, others agreed that in the main they prefer not to listen to anything while reading, especially for a book like this that requires quite a bit of attention.

So I tried that old ‘if this book were a cake’ and the following suggestions were made – savoury pork pie; carrot cake; mushroom cake (!); space cakes (for the discussion anyway); rocky road with unexpected marshmellows and – the suggestion of the night – a giant Victoria Sponge that had to be finished in one sitting but one that didn’t have any cream or jam.

4/10
After our discussion, a few of us got to chatting about an excellent documentary called the Internet’s Own Boy – the story of Aaron Swartz.
It’s possible to watch the whole thing here via youtube
For further details, please email me at leedsbookclub@gmail.com or tweet me @LeedsBookClub!
Contact the bar on @MedusaBar
And feel free to let us know your thoughts using #LBCMedusa!