Huge thanks to the wonderful @AlisonNeale for providing this write up and co-ordinating the Dystopian book club! 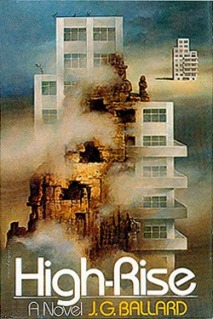 Possibly the oddest opening line I’ve ever read and the book only gets weirder. We agreed at the start, however, that this book is not intended to be realistic – although those of us living in blocks of flats could see flashes of realism in the situation – and is instead an allegory and an amplification of the actions of humanity in times of crisis.

High-Rise interestingly reveals that even among people of one class or social stratum, divisions and shifts of allegiance into tribes will take place. There’s always someone to look down on or blame. Politically, this is perhaps a particularly good time to be reading such a book.

The story switches between representatives of the tribes, allowing the reader alone to realise the depth of paranoia among the inhabitants of the high-rise. Alongside the author, residents are shown to be orchestrating and furthering the ‘experiment’, videoing events and manipulating those around them. We found it hard to understand why they wished to exacerbate the situation and at the same time keep it a secret from the outside world. As society breaks down, the adults become primeval cave(wo)men – a behaviour that in the character of Laing, for example, leads to uncomfortable extremes.

So, what did we think of it? This is the first dystopian novel we have read set in such insular circumstances. In fact, the setting of London is completely irrelevant: the story could be anywhere, and almost at any time. However, it took us longer to read than expected, given that it’s a short book. We found it interesting, but unpleasant; however, we were nearly all ‘gripped’ and eager to reach the end. Said ending was somewhat unexpected, although its lack of a proper conclusion was not unliked by most.We noted the book’s detached feel: there is no moralising, no judgement – simply documentary narration.
On the heels of the recent announcement of a film version, we felt that the last lines of the story seemed particularly cinematic.At the same time, however, we were uncomfortable with the extremely male perspective: rape was a simple shorthand for the breakdown in society and some of the attitudes to an extent reflect the time in which the book was written. Abusive behaviour also applied to the treatment of animals – again a rather uncomfortable read – but oddly, in this case the author gave more detail and expressed far more sympathy than for the humans.The scores probably accurately reflect our feelings: it was a worthy novel, well written, and while in no way was it a pleasure to read, we were glad we had.

Find fellow members on twitter by searching for #LBCGiraffe

Follow @GiraffeTweet for details on the deliciousables and their projects nationwide (which this month include an awesome #GiraffesCantDance giveaway!).
Let me know your thoughts by either tweeting me @LeedsBookClub, commenting below or emailing me at leedsbookclub@gmail.com
* * * * *