LBC Outlaws
The books that make you go ooooooooo!!!!

‘Paul Madvig was a cheerfully corrupt ward-heeler who aspired to something better: the daughter of Senator Ralph Bancroft Henry, the heiress to a dynasty of political purebreds.
Did he want her badly enough to commit murder? And if Madvig was innocent, which of his dozens of enemies was doing an awfully good job of framing him?

Ned Beaumont is a tall, thin, moustache-wearing, TB-ridden, drinking, gambling and hanger-on to the political boss of a corrupt Eastern city. Nevertheless – like every Hammett hero (and like Hammett himself) – he has an unbreakable, if idiosyncratic moral code.

Ned’s boss wants him to better himself with a thoroughbred senators daughter; but does he want it badly enough to commit murder? If he’s innocent, who wants him in the frame? Beaumont must find out.

Dashiell Samuel Hammett was born in St. Mary’s County. He grew up in Philadelphia and Baltimore. Hammett left school at the age of fourteen and held several kinds of jobs thereafter—messenger boy, newsboy, clerk, operator, and stevedore, finally becoming an operative for Pinkerton’s Detective Agency.

Sleuthing suited young Hammett, but World War I intervened, interrupting his work and injuring his health. When Sergeant Hammett was discharged from the last of several hospitals, he resumed detective work.

He soon turned to writing, and in the late 1920s Hammett became the unquestioned master of detective-story fiction in America. In The Maltese Falcon (1930) he first introduced his famous private eye, Sam Spade. The Thin Man (1932) offered another immortal sleuth, Nick Charles. Red Harvest (1929), The Dain Curse (1929), and The Glass Key (1931) are among his most successful novels.

During World War II, Hammett again served as sergeant in the Army, this time for more than two years, most of which he spent in the Aleutians.

Hammett’s later life was marked in part by ill health, alcoholism, a period of imprisonment related to his alleged membership in the Communist Party, and by his long-time companion, the author Lillian Hellman, with whom he had a very volatile relationship. His attempt at autobiographical fiction survives in the story “Tulip,” which is contained in the posthumous collection The Big Knockover (1966, edited by Lillian Hellman).

Another volume of his stories, The Continental Op (1974, edited by Stephen Marcus), introduced the final Hammett character: the “Op,” a nameless detective (or “operative”) who displays little of his personality, making him a classic tough guy in the hard-boiled mould—a bit like Hammett himself. 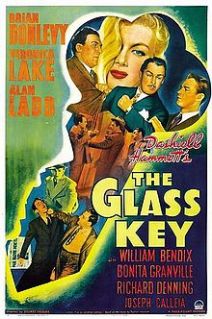 As with any good ‘who done it?’ book, there is always a little twist towards the end of the book. And this one is no exception. Chosen for the latest addition to the family of LeedsBookClub – LBC Outlaws –‘The books that make you go ooohh’ – the group met to discuss this classic detective story about loyalty, politics and crime set in America in the 1930s.
I had been reading this on my kindle and I hadn’t seen or read anything about it, so essentially I went in blind and believed for the most part of it I was reading a western. How wrong was I?
Instead it is about relationships, bad decision making, gangsters, gamblers, politicians and the corrupt world of the 1930s.
But it has been a tough one to review.

Although it is a classic this book; it didn’t seem to go down too well with some in the group, but that’s the great thing about book club – so many different viewpoints! The Glass Key was said by some to be like that classic vegetable based spread, you either loved it or hated it (or in one person’s case it was so bad the kindle/book nearly went across the room while another said they would rather read the back of a packet of cornflakes)!

It was thought that because this story is told in the third person, it felt like it lacked a connection between the reader and the characters. None was built and as there was no explanation about background information, it felt like you were just dipping into someone’s world for the day. Hopefully if you choose to read this a second time, you might have a different opinion again.

This book has been adapted into a film on two occasions. Those who had seen a film version noted that it bore little resemblance to the book and didn’t have the same feel. The writing of the book did make people feel that the writer assumed quite a lot and thought we would all know what it was like in the 1930s – just goes to prove as I thought we were dealing with cowboys and then when I was told all I could hear was ‘we could have been anything we wanted to be’ from the film Bugsy Malone.

But in the end it was a story about class, politics, people wining in love or power and mainly about friendship, and how you should always stick by someone.