One of our regular book clubbers has very kindly agreed to put (virtual) pen to (virtual) page and write us a superb review of this excellent book.
Please join me in saying WELL DONE and THANKS to Helen who tweets at @isfromupnorth and blogs at Hello from me to you! I didn’t actually know that Helen blogged until tonight and have really enjoyed the few posts I’ve scanned tonight! Huzzah!

BLURB (from Waterstones)
Bilbo Baggins is a hobbit who enjoys a comfortable, unambitious life, rarely travelling further than the pantry of his hobbit-hole in Bag End. But his contentment is disturbed when the wizard, Gandalf, and a company of thirteen dwarves arrive on his doorstep one day to whisk him away on an unexpected journey ‘there and back again’.

They have a plot to raid the treasure hoard of Smaug the Magnificent, a large and very dangerous dragon…The prelude to The Lord of the Rings, The Hobbit has sold many millions of copies since its publication in 1937, establishing itself as one of the most beloved and influential books of the twentieth century.

About the Author (from Amazon)
J.R.R. Tolkien was born on 3rd January 1892 in Bloemfontein. After serving in the First World War, he embarked upon a distinguished academic career and was recognised as one of the finest philologists in the world. He is, however, best known for his extraordinary works of fiction The Hobbit, The Lord of the Rings and The Silmarillion. He died on 2nd September 1973 at the age of 81. 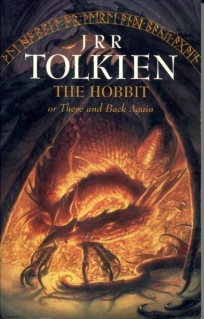 I decided to jump on the bandwagon and see the film but had to read the book first, I always prefer it that way but it can sometimes mean ruining a good book. I remember first picking it up about 12 years ago when I was staying at my Aunt and Uncle’s.

My Uncle had a lovely hardback of the book and I tried reading a chapter but it didn’t grip me. I now wish I had made more of an effort as I had more time then to read it then I do now. To me it wasn’t a quick read, but I think it’s just down to the time of year and not finding it a quick easy read.

I have to say for such a small book there’s quite a lot packed into it. The chapters have so much detail in it from descriptions of places to characters and the atmosphere, making you feel like you’re actually there watching the conversation between Bilbo and
Gollum for example. At times I got really lost in this book and loved the illustrations at the beginning of each chapter. In my copy they are by David Wyatt, each one setting the scene for the chapter ahead. Magical!

So the story begins. I love the first paragraph:


‘In a hole in the ground there lived a hobbit. Not a nasty,dirty,wet hole, filled with the ends of worms and an oozy smell, nor yet a dry, bare sandy hole with nothing in it to sitdown on or eat: it was a hobbit-hole, and that means comfort.’ 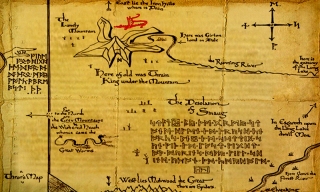 This opening gave me the impression that we were about to meet a creature who was proud and perhaps a little posh. And then we meet Bilbo.

I love all the background story that Tolkien uses to build up the picture of what Bilbo is like. I wonder if he based Bilbo on someone he knew, as he has very human qualities.

I’m sure everyone by now has heard about The Hobbit and what it’s about. I thought I did until I read it. It starts with being introduced to Bilbo Baggins the hobbit who appears to have certain standards and a quiet life and doesn’t want to do anything out of his comfort zone i.e. fast, exciting, and possibly dangerous adventures, until one moment changes everything and he ends up caught in a long adventure that changes
him forever. It’s also about how people perceive each other. The Dwarves don’t think much of Gandalf the Wizards choice in bringing the hobbit along on a dangerous journey to capture the treasure from a dangerous dragon Smaug, but in the end due to several turn of events they become to believe in him and accept him as part of the clan/gang. It kind of reminds me of today’s society, mainly schools, and how sometimes we have to prove ourselves to be accepted in certain groups.

I did love this book. I would recommend it to everyone, I just think you need to give it a lot of your time and just lose yourself in it. As it’s not just a book about adventures and
magical creatures such as dwarves and elves and goblins but about personal journeys about how we are all meant to do certain things in life and when we step out of the comfort zone all because of one moment, one decision that then changes the path you were meant to take and without realising it your character/person who you once were.

There’s also a lot of poetry or riddles in this which are a major part in the story, whether to get Bilbo out of a fix or to rally up team spirit and everyone joining in the singing, showing the importance of being together. Yes it’s a children book and this seems all very deep but sometimes we just need to read a children’s book to gain perspective again. Our lives are made too complicated these days and its books like these that we need to escape from the real world.

One thought on “The Hobbit (book) – Guest Review”