THE BLURB (from Amazon)

From the master of dystopia, comes his heartrending story of a British boy’s four year ordeal in a Japanese prison camp during the Second World War.
Based on J. G. Ballard’s own childhood, this is the extraordinary account of a boy’s life in Japanese-occupied wartime Shanghai – a mesmerising, hypnotically compelling novel of war, of starvation and survival, of internment camps and death marches. It blends searing honesty with an almost hallucinatory vision of a world thrown utterly out of joint.
Rooted as it is in the author’s own disturbing experience of war in our time, it is one of a handful of novels by which the twentieth century will be not only remembered but judged. 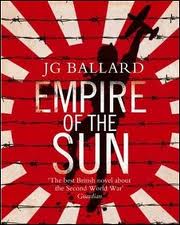 9/10
I know right? Thats the average score. The AVERAGE.
Trailer to the 1987 film. Also excellent.
For further details, please email me at leedsbookclub@gmail.com or tweet me @LeedsBookClub!
Contact the bar on @MedusaBar
And feel free to let us know your thoughts using #MedusaLBC!