Paul Auster’s signature work, The New York Trilogy, consists of three interlocking novels: City of Glass, Ghosts, and The Locked Room; haunting and mysterious tales that move at the breathless pace of a thriller. 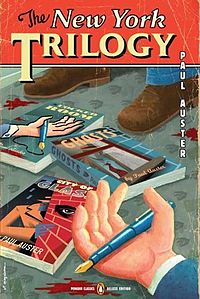 This is definitely one of the more outlandish books we’ve read since I started coming to book club. The three ‘connected’ storylines seemed to fuel a very disconnected discussion – I’ve tried to give it some coherence but we spent a lot of time jumping around from topic to topic, looping and backtracking and generally nattering away to our heart’s content.

As a very general rule, most of the group seemed fairly apathetic about the first book, City of Glass, either loved or hated Ghosts, number two, and felt the most engaged by the third book, The Locked Room. We felt that overall, whilst we could appreciate the ways in which the books were connected, we wanted a little more information and a more satisfying resolution at the end to bring everything together even more. However, please bear in mind that for every such statement I make in this review, there was always at least one person who disagreed vehemently!

One of the themes of the book seems to be names and identity. We saw some characters with the same names, and others that went by a series of different names. One character had a little discussion with himself about umbrellas, and whether a broken umbrella, which doesn’t fulfil the function of an umbrella, could still be called an umbrella. (The general consensus at book club was, yes, it would be called a broken umbrella. Duh.) The last few pages of the book state that these three stories are essentially the same story at different levels of awareness/understanding (or something like that) which would
imply that various characters in each story should have equivalents in the other stories, but we didn’t really get into that beyond identifying the fact that in each story there
was a detached puppet master with shady or unclear motives. (On the topic of identity, several people stated that having the author appear in his own book once came across as
egotistical and arrogant. Having four characters named Paul Auster was just beyond a joke.)

One thing that most people seemed to like about the book was the regular asides, telling little stories apparently unconnected to the narrative read by the characters in books or newspapers. We found them diverting and often intriguing, and one in particular (about a man who leaves his wife, essentially as a practical joke, and doesn’t return until many years later after she has held his funeral) caught our attention – it foreshadowed the
overarching narrative of the third book quite neatly and served as a nice example of the way the stories intertwined in so many ways. Another such interesting story concerned the building of the Brooklyn Bridge – we had all wondered whether that was true when we read it.(LBC – TURNS OUT IT WAS)

Other things which we felt were features of all three books were the unreliable passage of time, characters losing themselves in obsession, writing – including notebooks and reports – and men abandoning women. We didn’t feel keen on Auster’s portrayal of
women in general, actually, and noticed a few offensive phrases. Although some found this quite organic, and in keeping with the stylistic play on the detective novel, others felt certain words jarred a little. Most of us agreed that the women featuring in the book felt quite unrealistic and idealised, in particular Sophie, who despite a three month old child and a missing husband has a body to die for, along with being graceful, kind and understanding.

We didn’t seem to discuss City of Glass too much, confirming initial impressions that people weren’t really too fussed about it. We wondered whether there had ever actually been a case, or whether it was wishful thinking on behalf of Daniel Quinn, the unfulfilled protagonist. Although the plot was quite interesting, we didn’t feel that the characters particularly engaged us, and we didn’t think this first book was very memorable.

Ghosts was a lot more polarising. Some found it fascinating, with an interesting concept and a clever way of playing on the detective novel archetypes; it had a very visual New York detective genre feel, and maintained a mystery successfully, but the mystery ended up to be something completely pointless. Others, however, thought the colours as names were a bit gimmicky and had trouble assigning any significance to the various colours.

We weren’t sure in the end whether Black and White were the same person – had Black, masquerading as White, hired Blue to watch him so that he could feel he had a purpose to his life?

The Locked Room seemed to be received quite well. We felt it had much more in the way of plot, and that the characters (particularly the unnamed narrator and the absent Fanshawe) were developed really well. We universally cringed at the hugely
inappropriate and unbelievable sex scene between the narrator and Fanshawe’s mother, but we were definitely intrigued by developments and we really wanted to know what happened to Fanshawe. We did agree though that there was a lack of resolution within the story and that desire to know what happened was left unsatisfied!

We agreed that the three books could stand alone quite easily, although possibly Ghosts would feel a little thin. Some even thought they would enjoy the stories better had they
read them in separate volumes a few months apart. Because most of us had read them in a single book, we thought of it as a book with three parts; perhaps thinking of it as three separate books that interlink would have helped us to consider them separately.
This might have got the book some higher ratings, as it seemed like the majority of the frustration with this book came from the lack of resolution and connection between the stories. 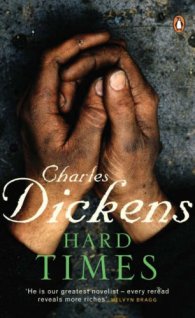 And feel free to let us know your thoughts using #ArcadiaLBC!