I’m reading through all six of the Booker Prize shortlisted novels  – attempting to finish before the winner is announced, although given the size of the books that is looking unlikely at the moment! Here’s the fourth of my reviews, for The Lighthouse by Alison Moore.

On the outer deck of a North Sea ferry stands Futh, a middle-aged and newly separated man, on his way to Germany for a restorative walking holiday. After an inexplicably hostile encounter with a hotel landlord, Futh sets out along the Rhine.

As he contemplates an earlier trip to Germany and the things he has done in his life, he does not foresee the potentially devastating consequences of things not done. The Lighthouse, Alison Moore’s first novel, tells the tense, gripping story of a man trying to find himself, but becoming lost. 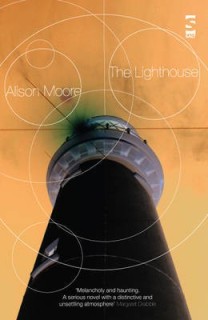 This is a sad, strange book. It follows Futh’s travels around Germany, and his recollections of his previous visit with his father, as a child, just after his mother had left them both. Mixed in with these recollections are other memories of his childhood, including one scene which is repeated several times – each time revealing a little more of the story. In parallel with this, he also recalls the course of his recently-ended marriage.
Alternating chapters with Futh is the story of Ester, the ageing wife of the hotel landlord Futh encounters at the beginning of his trip. Ignored (and, it is implied, occasionally beaten) by her husband, Ester uses the men staying at her hotel to to try and regain her husband’s attention by provoking his violent jealousy.
All strands of the story are drawn together by the motif of the lighthouse: a silver model that Futh carries everywhere he goes, that once contained a perfume bottle belonging to his mother. Ester also has a lighthouse perfume bottle, although hers is the cheaper, wooden version, and it is this that eventually leads them both to the genuinely shocking conclusion of the novel.
I wasn’t sure what to make of this book at first. It’s not a comfortable read. Futh himself is a difficult character to sympathise with – he’s frustratingly passive, and seems oblivious to the consequences of his actions when he does act. However, I did find myself feeling sorry for him as the book went on. I found the story of his marriage a little difficult to believe: it was painfully obvious from the beginning that his wife despised him and always had, so it was a mystery to me why they’d got married in the first place. Although Futh’s wife, Angela (which was also his mother’s name – it’s pretty strongly signalled that Futh has some serious mommy issues!) was not a particularly likeable character, I did find her a bit more interesting to read about than Futh.
I actually found Ester’s story more compelling. The recollections of her early courtship with her husband – she’d been engaged to his brother, but had fallen in love with him instead – were heartbreaking when contrasted with the lonely, abusive situation she’s found herself in years down the line. Although she was also not very likeable – in fact, there aren’t many likeable characters in the book at all – I did sympathise with her. I think I could understand why she made the choices and took the actions she did a little easier, whereas Futh remained inscrutable throughout.
The writing is wonderful, as you’d expect from a Booker nominee! Moore has a good way with uncomfortable descriptions, suiting the uncomfortable tone of the book: e.g. “His heart feels like the raw meat that it is. It feels like something raw and bleeding”, or “the smell of cigarette smoke and baking fades until it is gone, leaving only the spilt ash on his fingertips and saliva in his mouth”. Her use of scents, and understanding of how closely they are tied to memory, is also wonderful. Futh works as a manufacturer of synthetic smells, and has an obsession with the smells he associates with his mother: violets, from her perfume, in particular. Scent thus forms a motif within the book alongside the lighthouse itself.
Although I found it a little difficult to get into at first, I was absolutely gripped by the time I’d got a few chapters in. Alternating the chapters between Futh and Ester, and playing around with the chronology of events, repeating some events and revealing more details, gives the book a momentum that the story itself might not have had alone. The ending (which I’m trying not to spoil!) was not wholly unexpected, but still shocking when it arrived.
I don’t think this is the strongest book on the shortlist, Swimming Home is still my favourite, but I did prefer it to Narcopolis and The Garden of Evening Mists. Thinking about it, I probably would have enjoyed this more if I hadn’t read it straight after Swimming Home – that one left me with quite the book hangover! That’s not to say that I didn’t enjoy it, though: I don’t think it’ll win, but The Lighthouse is an impressive novel, doubly so as a debut. I will certainly look out for more of Alison Moore’s work in future.
SCORE:
8/10

One thought on “Man Booker Shortlist Book 04 – The Lighthouse – Guest”