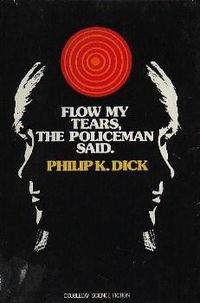 I love Philip K. Dick, but have to admit I haven’t read anything by him in a few years. This was an excellent re-introduction to his works.

“Flow My Tears, The Policeman Said” is the story of Jason Taverner, a “Six”, in other words a genetically engineered person.

Jason lives a lavish lifestyle, presents a TV show with millions of viewers and dates another “Six” Heather Hart. The Sixes are rare in this dystopian world and in fact almost a myth to other normal people. As a Six, Jason is good-looking, vibrant and talented and because of this has become very very rich.

After being attacked by an ex-girlfriend, Jason wakes up in a sleazy motel room with no identification on him, he realizes and explains to the reader that this means certain transportation to a forced labour camp should be found by the Nats or Pols. After organizing forged ID cards, he discovers that there is no record that he ever existed, and in fact not even Heather knows who he is. So his journey begins, from being an extremely well-known TV star, to being an unknown on the run from the police whose attention he has unintentionally drawn. Jason must find out why he has become a “non-person” and try to restore his identity with only a slightly insane ID forger to assist him.

I really got immersed in this dystopian world that Philip K. Dick created. Jason is considerably unlikable at the start, only retaining some degree of sympathy when contrasted to Heather, who looks down on anyone who is not as rich or beautiful as they are. However as the story progresses and we find out how dangerous his world is to someone who has no past or proof of his existence, you can’t help but feel sorry for his plight.
I flew through this book, and loved it all, but then in my opinion Philip K. Dick can do no wrong.

There is plans for a movie adaptation of this, so looking forward to that.