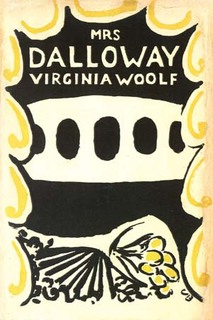 Sigh, Virginia, Virginia, Virginia! This book was on my TBR shelf, but I also picked it this month as part of my mini challenge to attempt to read at least one book from 1001 Books You Must Read Before You Die every month. The reason this was on my shelf in the first place was because it was part of one of my courses for English Lit in college. I couldn’t finish it then, and I really struggled to finish it now.
It is set during the course of one day in London, the day of Clarissa Dalloway’s party. It follows numerous characters throughout the day; Clarissa and her husband Richard; Clarissa’s ex-fiancee Peter Walsh; also Septimus Warren Smith and his wife Rezia among others.
At this point I would normally give a brief synopsis of the beginning of the book, but with this I just can’t. I don’t feel that anything much happened and I get the feeling that that’s half the point of the novel, which just makes my head hurt. It is written in a sort of “Stream of Consciousness” style which I personally find very hard to read. It also flicks from one person to another so quickly that I found myself losing track of whose brain I was in at any given moment.
I won’t insult anyone who loves this book by trying to give a synopsis, and instead I’ll just give my opinion. I can see how people would think this is a wonderful book, I really can. When put in perspective of Virginia Woolf’s state of mind and her struggle with depression, you can see how this is reflected brilliantly in the character of Septimus Warren Smith – a war veteran suffering from Post Traumatic Stress. Virginia Woolf herself suffered from severe depression, and treatments such as rest and good food were prescribed to her, much like Mr Smith in the novel. Judging by the way she writes about his depression and his doctors, Virginia Woolf was painfully aware of how ridiculous these cures were and how the illness she suffered from was not being taken seriously by anyone at the time. In fact it was mostly thought to be imaginary, something that the person would grow out of with rest.
To me, the story of Septimus and his wife was the only bit of the novel that I felt in anyway meaningful. It’s the only bit that I enjoyed, maybe because I felt that his mental condition was really what she intended to write about. All the other characters are much more 2 dimensional, and I just didn’t care about them. It also took me about 2 and a half weeks to read this, and considering it was only about 200 pages long, that shows how much of a struggle it was. Will be avoiding Virginia Woolf like the plague from now on I think, just not for me.
YouTube: