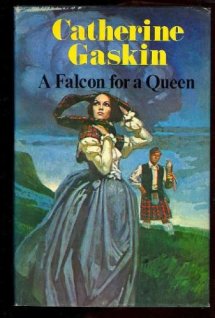 My mum was doing a clear out of her old books that she didn’t want anymore about a year ago, so of course invited me over to have a look through them before she brought them to the charity shop. This is one of the books I picked up. I’m still not sure why I took this one, as it’s not the type of book I would generally go for, but something obviously called out to me, and I’m really glad it did.
The BLURB:
Tells the story of Kirsty Howard, who leaves China when her parents die and seeks out her grandfather in Scotland. It is a strange world she finds at Cluain – an arrogant and lonely old man running one of the finest whiskey distilleries in the world with two women running the house.
The cover is gorgeous, it depicts a windswept woman on the Scottish highlands with a fine looking young man bearing a falcon in the background, just reeks of historical romance. And that’s exactly what it is.
The novel is set in 1898 in Scotland. Kirsty Howard has lived in China all of her life with her father and her brother. After her father is killed, Kirsty receives a letter from her estranged Grandfather to say that her brother who had been studying in Scotland has also sadly passed away in a freak gun accident. Now her mother’s father who she never knew is the only family she has left so she packs up and journey’s to the highlands to try to find out more about her brother’s death and also to see if she can get to know her only surviving relation.
I love the character of Kirsty. She is an extremely brave and strong young woman, leaving everything and everyone she has ever known to track down her remaining family in a far off land is no small feat. Especially when she receives a very cold welcome from Angus and his housekeeper. Angus is a bit of a tricky character to describe. At first he seems very against Kirsty’s visit. In fact he mentions a lot the fact that the only person he could have left his distillery to (her brother William) was killed and now the distillery will die with Angus. Despite Kirsty’s attempts to get close to her Grandfather and prove that she has the brains to learn how to take over, he keeps his distance from her. We find out that Kirsty’s father came to Cluain, and won her mother’s heart. Unfortunately for Angus he then took her to Peking with him, where she eventually died, without being able to return. Angus had held this against the Howards until William started visiting during his breaks from university. Angus grew very fond of William and was content in the fact that he now had an heir again.
When William died, Angus grew bitter once more. The thing I love about Angus is that in spite of the fact that he tries to push Kirsty away, demeaning her for being a woman who has no business sense, he also can’t help but treat this unknown girl as family. He becomes quite protective of her, and amidst his rants to her, he creates a tradition early on in her visit of a glass of whiskey with her before bed. This is a time when they talk about their day, and he tells her all about the business, it’s almost as if he wishes that she were a man, who could take over but can’t quite convince himself that she could do so as a woman.
Of course amongst all this there is a love story. The housekeeper’s son who basically runs the distillery, and also keeps a Falcon is a very mysterious figure at the start. And of course because of this, Kirsty feels she needs to find out more about him and becomes sort of a stalker, taking her horse out for runs which just happen to be conveniently going past his cottage!
This book is beautifully written, describing the Scottish highlands in such a romantic and wind-swept way, the characters are deep, and intriguing and there is a kind of gothic mystery in the background throughout. I found it very hard to put this down, and when I am finally allowed to buy books again, I will be looking up this author.
YouTube: