Discussing: Even the dogs by Jon McGregor

On a still and frozen day between Christmas and New Year, a man’s body is found lying in his ruined flat. Found, and then taken away, examined, investigated and cremated.

As the state begins its detailed, dispassionate inquest, the man embarks on his last journey through a world he has not ventured into, alive, for years. In his wake, a series of fractured narratives emerge from squats and alleyways across the city: the short and stark story of the man, and of his friends who look on from the shadows, keeping vigil as the hours pass, paying their own particular homage.

As they watch, their stories unfurl layer by layer; stories of lives fallen through the cracks, hopes flaring and dying, love overwhelmed by a stronger need, and the havoc wrought by drugs, distress, and the disregard of the wider world.

Intense, exhilarating, and shot through with hope and fury, Even the Dogs is an intimate exploration of life at the edges of society; littered with love, loss, despair and a glimpse of redemption. 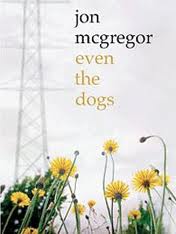 We jumped straight into this book – we had so much to say about it.

Before moving onto the writing style and analyses of the relationships; we discussed each of the characters. Generally; we found Dan to be a likable if weak character. He rolled with the punches. Misfortune seemed to haunt him. Certainly he felt like a character that you could see in day to day life. Though each character was afforded their own space within the novel, he became our primary protagonist.

Laura seemed to depict a typical teenager and felt less well drawn than Dan. Heather was one we were very conflicted about. At first we had greatly warmed to her but her interactions with Ben chilled us. We were intrigued about the background regarding the child taken into care. In this, she was a very unreliable witness – we were unable to pick away at the true story. This felt very authentic to us.
Ben was another that confounded us. We couldn’t quite agree on his age. Though he had been described through everyone else’s eyes long before he actually appeared; we never really found out what he was like. Clearly he had been abused repeatedly throughout his life. Equally obvious was his violent streak.

Robert is the centre of gravity of this book, rather than a character within it. This becomes especially obvious when his autopsy occurs. His relationships with Laura and his ex-wife felt painfully realistic. Additionally he had been ‘betrayed’ by his former employers – the army. The injury that indirectly caused the dissolution of his marriage was a poorly treated wound sustained in the line of duty. A surprisingly cunning man; he also appeared to be defrauding the state several times over, but our sympathy remained with him throughout. With regards to his death; we were horrified to recall the lady that had remained undiscovered for 3 years! o yeah; that didn’t strike us as unfeasible either.  Despite the squalor described and the graphic nature of some scenes within the book, we agreed that there was no (or very few) moral judgement made. Each character and each perspective was described as a translation from experience to the page. This provided a multi-layer cinematic environment that for the most part allowed us to immerse ourselves in their stories. However; this became problematic when the story of Ben gradually unfolded. Here, the actions occurring surely required some sort of judgement? It speaks to the talent of the author that we all of us found our curiosity in the world overtook our distaste at some aspects of it!

Each chapter felt very distinct. Each character had a unique voice. However we were divided on the device used throughout where sentences drift out in the middle of the…
For some of us; it was great – we were always able to mentally finish the thought. However, for others, it was irritating; the lack of punctuation taking from their enjoyment of the structure.    For one person, it was there first eBook and they had initially thought that it had been corrupted!

We found the pacing of the book also worthy of note. Chapter 2 was frantic. Chapter 3 started to carry more emotional impact and the final chapters seemed to alternate between the two.

One of the other divisive concepts that were the spirits or ghosts that cropped up throughout the book. They seemed friendly and likable. We noted that they didn’t interact with Heather at all. They also appeared to be the creatures within the novel that actually cared about Robert.

A far more bleak read than we had expected but a good one. The vast majority of us will be seeking out more of his works in the future. Especially when we heard that they were more cheerful.
Score – 8/10
Soundtrack
We decided on Bats for Lashes
If this book were a cake…
Cake – the drug from Brass Eye

Treats!!
For further details, please email me at leedsbookclub@gmail.com or tweet me @LeedsBookClub!
The Pub can be contacted on @WhiteSwanLeeds
And feel free to let us know your thoughts using #WSwanLBC!