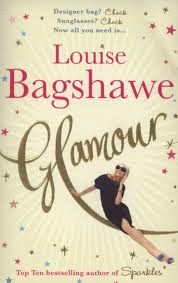 The story opens with a scene of chaos outside a huge department store, press and fans are waiting outside to see one of their idols enter.

The store is called Glamour and the hustle and bustle is for the 3 girls who own this store, these 3 girls have become some of the most famous names in America and their beauty and style is renowned. Unfortunately, today could be the end of all that as rumour has it that a disagreement between the former best friends could mean the shares going public.

As this is all the information the reader has to go on, the first thing we question is who are these girls, how did they become so famous and so rich and most importantly what happened to ruin their friendship? Luckily at this point we meet the flashback!

Back in time we go, to when the girls were just 16 years old and in a very expensive private school in California. We have Sally, a beautiful blonde, who is very popular and confident. We also have Jane, who is a plain, shy bookworm from England. Soon to join them is a new girl in the school, Helen from Jordan, who immediately gets bullied by a group of so-called popular girls, and is rescued by Sally and Jane. Sally takes the 2 girls under her wing, and gives them a makeover bringing out the beauty hidden away behind Jane’s thick glasses and Helen’s shyness.

Their worlds are about to be rocked, as all 3 girls have to face their own trials. Jane discovers her father, a British Ambassador has committed suicide after scandals were uncovered. Sally’s father has a heart attack when he finds out that he is about to go bankrupt, and Helen finds herself in Egypt after her parents trick her into marrying a man she has only just met. The girls lose contact as each go their seperate ways, and the story follows each of them in their struggles to claim back their broken lives.

I find that Louise Bagshawe’s novels and heroines are very formulaic. Generally speaking we have a girl, usually more than one which have some unknown connection to each other. The rich one, because there is always a rich one, loses her fortune and or family, and must work her way up from the bottom, eventually becoming the President of the world or similar.

But you know what? Predictable and all as it was, her writing is quite enjoyable, and mostly I like her characters, maybe they’re not the most easy to realate, I mean, I’ve never heard of anyone being promoted from Greeter to Vice-President of Personnel just because the top dog heard them being treated badly in the store by the girls who used to bully her, but how and ever, this is make believe which is what I have to remind myself. Her novels are sort of like modern fairy tales for the strong powerful woman. Instead of Cinderella being mistreated by her ugly stepsister, she is mistreated by life, and instead of ending with a wedding dance and a happily ever after, it ends with a happily ever after and Cinderella in a penthouse apartment in New York reaping the gains from her multinational company. It’s kind of sweet really.

(NOTE FROM LEEDSBOOKCLUB – Louise Bagshawe is the alter-ego of Conservative MP Louise Mensch – where does she find the time?)

#KirkstallAbbey
Thought this was lovely
The spuds and carrots are home grown! The fruits of @beerdarella hard work and my... being there while she did it.
Tweet of the day.
#KirkstallAbbey is being all beautiful today.
Weird weather #Rainbow #Leeds
%d bloggers like this: