Mark Swain – friend of Leeds Book Club and writer of short fiction here – is a huge fan of the horror genera, and will be providing us with some reviews!
Feel free to drop him a line on twitter – you’ll find him @DemonHeadClash 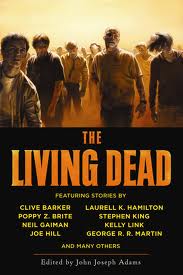 Sparks Fly Upwards is a story about Sarah. Following the zombie apocalypse, she now lives in a fortified community. When she becomes pregnant she is informed that the community can’t afford another mouth to feed and she must have the pregnancy aborted at an outside clinic. Unfortunately the undead corpses of those who – when alive – protested the clinic await her there.
As you can no doubt tell from the description this tale revolves around the question of abortion which is by definition a social hot topic and has been for quite a long time. Having read this story I am in no doubt that the author has a very heavy political and moral bias towards pro choice and unfortunately that message quite regularly interferes with the story telling. The author’s decision regarding the severity of how hard she pushes her point of view makes the tale more of a personal political statement than the thought provoking horror tale it might have been.
This is a great shame as the picture the author paints of a fortified community one year on from ‘the end of the world’ is interesting and delving into the issue faced by such a community is the best part of the story.
Another criticism I would have with the story is that it is written in a diary format and told strictly from the protagonists’ point of view. Any conversations she has with other characters are only seen from her perspective and of course, given this is a diary, these conversations are being remembered rather than taking place in front of the reader, so to speak. I am not a huge fan of this format for short story telling as the reader does not get much information regarding the main characters background and how other people view her which can lead to the reader failing to connect with the character. Also the lead being a bit of an ‘every women’ with no defining characteristics doesn’t help with this lack of connection either.
As previously stated this story does quite often read like a propaganda piece for pro choice, which I haven’t an issue with in of itself. After all I believe horror and science fiction, when used correctly, are excellent at taking what is going on around us and extenuating these problems – which in turn can make us view the world around us differently.
However such subtext should always be both subtle and open to the reader’s interpretation. This author has an agenda towards the abortion question and she sets her stall out fairly early on in the piece but never lets go of it.
Subtlety is not this story’s strong suit especially in the final third where the point is rammed home to such extent that the description of the main character leaving the clinic, which could have been a fantastically tense and nervy affair, is instead constrained to 3 short paragraphs. This totally destroys any atmosphere which might have been building up in that sequence and seems to have been heavily shortened to articulate more pro choice rhetoric.
I have no personal strong feelings regarding abortion and can understand the author wanting to make a point with the story but occasionally this is pushed far too hard.
I would like to read more of the author’s work which is out and out story telling but if this piece is an indication of her overall style that I can’t say I was that impressed.

Sparks Fly Upwards is available for free online here and is part of ‘The Living Dead’ anthology as edited by John Joseph Adams.