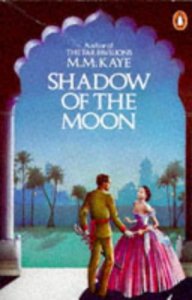 So I know having my first TBR challenge post at the end of February is pretty poor showing on my part, but I have many and numerous excuses for this, mostly along the lines of a)a lot of shit went down for me in the first two months of 2012, most of it for the positive and b)it’s not like I haven’t read anything, I just haven’t read anything I already owned. YOU try working in three libraries and having as many booky friends as I do, and then having a birthday and be given shed loads of Amazon vouchers (thank you) and then reading books you already owned! It’s blumming hard, I tell thee!
But what a start to the challenge this was. I gushed heavily over M. M. Kaye’s epic doorstopper romance The Far Pavilions, that I found in PovAid for 50p back in 2010, and I’ve been wanting to read more of her stuff ever since. I found The Shadow of the Moon, her 1958 romance reprinted on the back of The Far Pavilions success in the late 70s in PovAid last summer and once again snapped it up. However, it was, again, epically long, so sat on my shelf looking pretty for months. This February I’ve been in desperate need of cheap romance novels, however, and after binging on Cooper this tome was calling out to me.
Set for the most part during the 1857 (I think) Indian Mutiny and the months preceding it, this book is beautifully written, gripping from the off and that great mix of romance and terror that made The Far Pavilions so readable.
Winter de Ballesteros (best name ever. Fact) is the orphan heiress who is abandoned by her stuffy English aristocratic family to a arranged marriage with a gold digging bigot when she is 11. Travelling to India to be with her husband as a beautiful seventeen year old, she is placed under the care of dashing Captain Alex Randell. Alex is seemingly the only British officer to notice, or care, that the rule of the East India Company is failing and that the people of the Kingdoms of Hind are spoiling for a fight. Winter, obviously, falls for Alex and together they must survive the bloody fallout of years of incompetent and disrespectful colonialist rule.
Alex is my favourite part of the book. One of those heroes it’s impossible not to fall a little bit in love with (which I have done, massively), he’s such a good, well-rounded character that he lifts the lesser parts of the book-including the slightly 2D portrayals of the Indian characters-up to soaring heights. Constantly banging his head on a brick wall over the behaviour of his bigoted, ridiculous superiors including the horror that is Conway Barton, Winter’s husband, Alex is conflicted within himself to the point of almost changing sides. He doesn’t believe in Britain’s Divine right to rule, but seeing as they are there believes it must be down to the best of their ability. Like Ashton in The Far Pavilions, Alex uses the disguise of a native Indian, gets to know the local people and their customs and has many varied adventures throughout the book. He is honorable and well mannered and in real life it would be hard not to just launch myself at him.
The romance side of the book is subtly done. We see both Winter and Alex’s point of view and what I loved was how instinctive their feelings towards each other were. Alex doesn’t moon over his love, he has far bigger things on his mind, but when he collapses in her arms it’s real and you can feel the passion there. Winter is a wonderful heroine, though a little bit Stock Feisty for my tastes, and her back story, which takes up the first 200 pages or so, is fascinating.
Writing wise, I couldn’t fault this book. Her use of colour, of smell, the way she brings the world around her to life, it’s so sumptuous. She makes it seem so easy, parts you can feel her pen gliding over the page. The book is about racists, and includes a long of language that made me wince, so that combined with a slightly rushed and clunky ending (she could have easily stretched the last fifty pages of 200 or so and it wouldn’t have felt like too much, that’s how stunning the writing is) takes this down to a four, rather than the five stars it otherwise thoroughly deserves.
Any romance fans out there, get into M.M. Kaye! As far as I can figure out, she’s out of print, which is a huge shame. With a bit of an edit (some of the turns of phrase are very very 50s) this could be a best seller now. Beautiful book and I’m really really glad I’ve finally read it.
Purchased PovAid, Summer 2011

Visiting the ‘smugglers adventure’ in #Hastings yesterday. #Caves
Yesterday, out for a cycle. Check out those blue skies! Bliss!
Seen in its natural habitat, the wild woods of #KirkstallAbbey
#KirkstallAbbey
Thought this was lovely
%d bloggers like this: