Set in Knoxville, Tenn., in the 1950s, this novel tells the story of a man who has repudiated his well-to-do parents, deserted his wife and is now a river fisherman who consorts with robbers, ragmen and other outcasts.
Cornelius Suttree, who has forsaken a life of privilege with his prominent family to live in a dilapidated houseboat on the Tennessee River near Knoxville.  Remaining on the margins of the outcast community there–a brilliantly imagined collection of eccentrics, criminals, and squatters–he rises above the physical and human squalor with detachment, humour, and dignity. 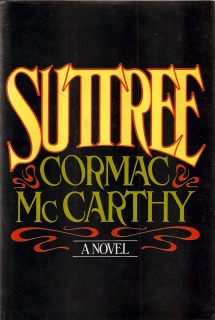 Speaking for myself; I was excited to read a Cormac McCarthy – my first – having enjoyed the adaptations brought to the big screen of ‘All the Pretty Horses’, ‘No Country for Old Men’ and ‘The Road’.
Suttree is an all or nothing sort of book – with no room for half measures. Roughly two thirds of the book is description – pure and simple and whatever tangible links there are towards a plot are deftly hidden beneath long winded passages of grass, trees and rivers.
Not all of the book clubbers had managed to finish it. However, we all agreed that we were challenged by the book – it forces concentration and a near absolute commitment to the page. Affectations used throughout the book (heavily stylised prose, no speech marks and few indications that one section has ended and another begun) were often very confusing and disrupted the flow of the story.
This book was a labour of love. McCarthy worked for over twenty years on this mammoth and somewhat autobiographical novel. Those of us who did manage to finish agreed that there was great disparity between certain sections – which seemed to have no bearing on one another. As it was so disjointed; it felt more like a collection of memories stored in one place than a coherent story – ‘varying short stories of varying quality’.
Even those among us who had read a McCarthy before (that one person!)found it a touch difficult as the story didn’t seem to have a linear pattern – which makes sense given how it was written. We spent about ten minutes trying to put the various sections in order – boat, prison, out of prison, flashback, boat, mourning – or possibly dream sequence…then alas our brains melted and we had to take a wine break!
Though not apparent to all of us; one member noticed that there was a certain inbuilt morality within the book. Whenever Suttree drank; awful things happened. It was also pretty unclear as to why he wasn’t speaking to his family. Without this insight; it felt emotionally stripped.
One final highlight – the scene where characters wheeled out the dead person and took a photo with them!! Finding out that was a real tendency way back when was fascinating!! And deeply deeply creepy.
All in all – this book might not have been the most tremendous of successes but over half of us would definitely read another book by Cormac McCarthy (likely one of his later works).
Score – 6/10
Soundtrack
I read this while listening to the ‘Oh Brother Where Art Thou’ soundtrack.
Another recommended Leonard Cohen.
Read it? What music would you pick?