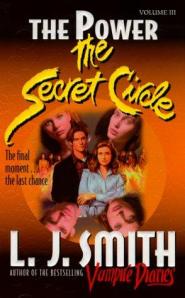 In So Deadly A Battle…


United at last with Diana, the mistress of her coven, Cassie must first sacrifice her love for Adam to save the Secret Circle and the town of New Salem from the evil powers of the witch Faye.


Threatened by the possibility of her destruction in a final battle between good and evil, Cassie must hope that her supernatural gifts are strong enough to obliterate the powers of evil.


If victorious, Cassie will win more than she ever dreamed. But if she and Diana fail, the Power will go to those who seek only to destroy.

By far the best book in the trilogy; so naturally it has THE WORST BLURB of the trilogy.

This book picks at the exact same point the second book ended. Faye has just devastated the group…for the second time by revealing that Cassie and Adam are madly in love and hiding it behind Diana’s back. You know…because she’s Adam’s ACTUAL girlfriend.

While the Coven are initially sceptical; they soon realise that Faye is telling the truth. Faye continues – revealing the Cassie stole the magical skull – all the while twisting the truth further and further to make it appear that Cassie had been deliberately using and working against her fellow practitioners.


Adam however insists on having his say. Between them, Cassie and Adam manage to explain what had really happened. The coven are confused and hurt but after Diana magnanimously forgives the duplicitous duo; all the poison leeches out of the gathering.

Furious at her failure to crush Cassie; Faye becomes increasingly vicious. On the one hand, she insists on being recognised as the Coven leader. On the other, she distances herself from the group so thoroughly that even her allies begins to recognise how pernicious an influence she has become.


Cassie tells the group of Black John’s most recent visit to the Cove – finally providing the group with the explanation to their parents death. For those in the group who still have both parents; it’s sobering. For those who lost a parent in the fight for good – particularly Nick who lost both – it offers respite. Although he is alone in the world, he knows now with certainty that his parents were decent upstanding witches – who gave their lives to try and protect the town from evil.


Black John finally reveals himself to the group at Cassie’s grandmothers funeral. It transpires that he has taken over the role of principal at their high school. His goal – it appears – is to destroy the coven.
Portia (from book one) and her witch-hunting brothers move into the area and the school environment rapidly changes. No long are the Coven on top – indeed they are now openly despised. Black John uses his power to create an anti-witch environment, while appearing to only be improving discipline. He even manages to bring back the stocks by claiming them as culturally and historically significant.


Cassie – whose mother has had a complete breakdown – moves in with Diana, who continues to offer friendship and support. Nick asks her out, and to everyone’s surprise Cassie accepts. She finds in Nick not a soul mate but a kindred spirit.
To the surprise of the Coven (but not the reader), Faye is seduced by the dark side…sorry…Black John. For all of her attitude and posturing, I was surprised to find that she was basically working as his secretary. Anyway, the Coven decide to ask previous generations about the last time Black John was in town. While initially reluctant; the surviving Elders eventually tell the younger witches that the only way to fight Black John is to find the original Master Tools – hidden in the past by the original coven to prevent Black John from achieving his full magical potential.

They also advise the girls to hold a ceremony – one designed to bring Faye back into the fold and bind the members together. In the end; there are two rituals – one for all the girls and one for just Diana and Cassie.


Unfortunately, it doesn’t appear that the ritual has worked. Faye gleefully tells Cassie the truth about Black John – that the last time he was in the Cove he seduced her mother. That her arrival precipitated everything that has happened since. That she is in fact (drum roll please) Black John’s daughter.


(OK, just to let you know – this brings us about halfway through the book. A LOT happens in this rather slender book!)


The next section is very detailed and involved, so I’m just going to highlight the results. Cassie, Diana and Adam set out to learn as much as they can from their Book of Shadows in preparation for the inevitable showdown with Voldemort…sorry again… Black John.

Long story short – using their combined knowledge Cassie taps into the power of her dreams and manages to locate the Master Tools. With Faye still on the outs with the Coven and having betrayed the club at least once, Diana once again ascends to the position of leader – albeit temporarily.


Individually and collectively, the Coven are attached by agents of Black John. It transpires that he had manipulated witch hunters in the past – using the fear and paranoia they created in the witch community to cause the move to the Cove in the first place. Recognising a winning formula when he sees one, Black John is now using the pushy Portia and her friends to try and find the location of the Master Tools. Time and again, the Coven work together to protect themselves – despite being a member short – though it is rapidly becoming obvious that they are being betrayed by someone within the inner circle.


After one such attack, Adam rescues Cassie in dramatic fashion and she realises that she has to break up with Nick. She has no intention of hurting Diana but she can’t be with anyone other than Adam. They remain too powerfully drawn to one another. Nick is surprisingly understanding about the whole thing. If nothing else, Cassie has forced him to face up to the fact that he is not alone in the world. Not anymore.


After one particularly sensitive piece of information is leaked, Cassie, Adam and Diana realise who the traitor is. Worse – they realise that there is a good chance that it is this person who was likely responsible for the deaths throughout the books.


Determined to keep *this* information secret, the circle fall apart…in public at least – continuing to gather as much intel as possible. Black John is preparing a hurricane – one that will isolate the Cove from the mainland and wipe out huge numbers of the population. Taking a huge risk, Cassie forges a reluctant truce with an outsider – hoping to save as many lives as she can.

Ultimately; the Cover are able to cleanse and purify the unwitting traitor but Faye still seems to have abandoned them. As it is an emergency, it is the ideal time to nominate a new leader. Before anyone can react, Diana nominates Cassie – who is stunned. The group unanimously agree. Before she can think, Cassie is about to lead the club against her father.


Black John has had centuries to prepare for this day. He sets the scene and Cassie feels helpless against him alone, even with the Master Tools. Her Coven join her – despite the risks and it is only by working together that they could possibly be able to defeat him. One by one the club use the knowledge they have collected throughout the series to bind him forever…but they can still feel his strength – diminished but not gone. In the end, wild unpredictable Faye steps up and joins her family and her friends. Black John is – for now and all future generations – defeated.

Cassie instantly checks on her mother who has finally regained her senses. The Coven remain determined for her to lead though she recognises that she’d be better with Diana for stability…and Faye for her passion. She will only stay on the Cove if they form a triumvirate and work together.

Finally, Diana points out that Cassie and Adam are soul mates and that it would be useless to deny it any further. Cassie and he are finally allowed to be together and she sees a glimpse of their future together – not just in this life but in an infinite number of futures.

In the end, she realises that she is truly home.

OK, I know I’ve made it sound a little ‘aw, bless’ there at the end but it’s actually very engrossing and I really enjoyed reading the series.

Just as well really. I borrowed the Vampire Diaries from a mate and I can’t get into it at all. 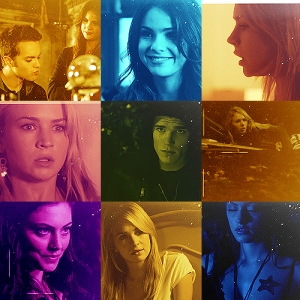