The Light Bulb Moment is a collection of pieces from various women and men, edited by Sian Norris, loosely based on the question ‘what was the lightbulb moment when you became a feminist?’. 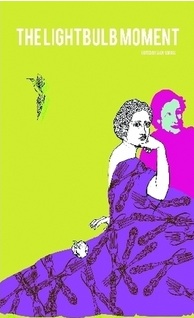 Like many of the contributors, my answer to this would probably be “I’ve always been”. This doesn’t stop this being a fascinating and moving collection that had me nodding my head throughout as well as reaching for my notepad to add various books mentioned and instances discussed to my ‘read about’ list.
The pieces are grouped (sort of) by theme, so you’ll have stories about when the writers were children, stories of activism, stories focusing on the anti-porn movement, or vawg, or other issues. The stories are all written in distinctive styles, Sian has done very well in her editing in allowing the contributors to maintain their ‘voice’. One piece written as a poem in particular “Girls Get Jam” (sorry I immediately lent this book to fellow feminist R so haven’t got the name of the woman who wrote it in front of me) was excellent, and I’ll be contacting her to request permission to post it up here.
There are a lot of big names in the book-which I think is my only issue with it. Having Laurie Penny and Jo Swinson as contributors might have added as certain gravitas for publicity, but Penny’s contribution is the article from the Graun about The Female Eunuch which isn’t even very insightful and I’ve already read on about fifty different websites a hundred times, and Swinson contributes an entire page. Wowsers.
Another thing this book shows is how much activism in inherited. I’ll put my hands up here and say my hippy parenting from feminist lefty Guardian reading Northern parents may have contributed slightly to my politics a bit, but Finn Mackay’s history of activism in the family, growing up on Greenham Common and having Julie Bindel round for dinner didn’t inspire me. How is someone so influential in feminism being the product of a system that creates and supports influential people any different from someone being equally influential in another spectrum being a product of the system that creates and supports their peers? You can’t really crap on Cameron and his ilk for being a Tory Scumbag, in power solely because of his privilege and inherited position and wealth when you’re who you are because of where you come from too. This made me think about how I criticise others, who can’t help not having a massive lefty for a dad and being force fed politics from childhood. Forgive them, for they know not what they do, and I know not either, to be honest. (I still would say that, having seen Finn Mackey speak a few times she is still the most powerful public speaker I’ve ever seen and still makes my heart beat that little bit faster every RTN).
However, these teeny criticisms aside, I loved this book. It made me cry small tears in places. Recognising a lot of the names as people I would be now proud to call friends, I was shocked at how much shit some people have gone through that I knew nothing about. It’s like one of the contributors says “women don’t talk about it”. There were moments where I wanted to jump on a megabus and give all my sisters magic heeling boob hugs!
This book isn’t one I’d recommend to people who aren’t already feminists, as it’s more of a reminiscence and reflection piece than a call to arms. It is also very limited in the scope of who is included, which Sian acknowledges. However, if you’ve got a family member or friend who is any way interested in the history of the woman’s movement, gender or feminism I would give them this book as a wonderful New Year’s gift. I’ve already passed it on, and shall definitely be buying a couple more copies to stick around some of the pubs in Leeds, as this would be a great book to dip into.
You can buy The Light Bulb Moment here.
Happy Reading (and Happy Christmas!)!
BookElf xxx

One thought on “The Light Bulb Moment Review”