The second (of three) Irish poets studied during my Leaving Certificate was Michael Longley.

This Northern Irish poet was utterly unknown to me before my final year at school. Of all the poems we read over and over and over again; these were the ones I struggled with the most. He manages to cram so much into each poem; every time that you see a particular perspective you realise that there are at least three more that you haven’t yet considered.
An Amish rug is perhaps my favourite. I’m a romantic at heart and everything about this just sings to my soul. The one I had to spend the longest on was Mayo Monologues – I hate that I understand the speakers perspective. I don’t want to, I still to this day wish that I didn’t.
I guess that’s the power and beauty of poetry. It gets under your skin.
An Amish Rug
As if a one-room schoolhouse were all we knew
And our clothes were black, our underclothes black,
Marriage a horse and buggy going to church
And the children silhouettes in a snowy field,
I bring you this patchwork like a smallholding
Where I served as the hired boy behind the harrow,
Its threads the colour of cantaloupe and cherry
Securing bay hales, corn cobs, tobacco leaves.
You may hang it on the wall, a cathedral window,
Or lay it out on the floor beside our bed
So that whenever we undress for sleep or love
We shall step over it as over a flowerbed.
1998 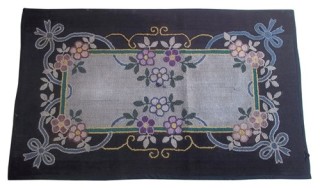 I
Your batman thought you were buried alive,
Left you for dead and stole your pocket watch
And cigarette case, all he could salvage
From the grave you so nearly had to share
With an unexploded shell. But your lungs
Surfaced to take a long remembered drag,
Heart contradicting as an epitaph
The two initials you had scratched on gold.
II

I thought you blew a kiss before you died,
But the bony fingers that waved to and fro
Were asking for a Woodbine, the last request
Of many soldiers in your company,
The brand you chose to smoke for forty years
Thoughtfully, each one like a sacrament.
I who bought peppermints and grapes only
Couldn’t reach you through the oxygen tent.

I wanted to teach him the names of flowers,
Self-heal and centaury; on the long acre
Where cattle never graze, bog asphodel.
Could I love someone so gone in the head
And, as they say, was I leading him on?
He’d slept in the cot until he was twelve
Because of his babyish ways, I suppose,
Or the lack of a bed: hadn’t his father
Gambled away all but rushy pasture?
His skull seemed to be hammered like a wedge
Into his shoulders, and his back was hunched,
Which gave him an almost scholarly air.
But he couldn’t remember the things I taught:
Each name would hover above its flower
Like a butterfly unable to alight.
That day I pulled a cuckoo-pint apart
To release the giddy insects from their cell.
Gently he slipped his hand between my thighs.
I wasn’t frightened; and still I don’t know why,
But I ran from him in tears to tell them.
I heard how every day for one whole week
He was flogged with a blackthorn, then tethered
In the hayfield. I might have been the cow
Whose tail he would later dock with shears,
And he the ram tangled in barbed wire
That he stoned to death when they set him free.

Enough running water
To cool the copper worm,
The veins at the wrist,
Vitriol to scorch the throat –
And the brimming hogshead,
Reduced by one noggin-full
Sprinkled on the ground,
Becomes an affair of
Remembered souterrains,
Sunk workshops, out-backs,
The back of the mind –
The whole bog an outhouse
Where, alongside cudgels,
Guns, the informer’s ear
We have buried it –
Blood-money, treasure trove.

Here are two pictures from my father’s head—
I have kept them like secrets until now:
First, the Ulster Division at the Somme
Going over the top with ‘Fuck the Pope!’
‘No Surrender!’: a boy about to die,
Screaming ‘Give ’em one for the Shankill!’
‘Wilder than Gurkhas’ were my father’s words
Of admiration and bewilderment.
Next comes the London-Scottish padre
Resettling kilts with his swagger-stick,
With a stylish backhand and a prayer.
Over a landscape of dead buttocks
My father followed him for fifty years.
At last, a belated casualty,
He said — lead traces flaring till they hurt —
‘I am dying for King and Country, slowly.’
I touched his hand, his thin head I touched.
Now, with military honours of a kind,
With his badges, his medals like rainbows,
His spinning compass, I bury beside him
Three teenage soldiers, bellies full of
Bullets and Irish beer, their flies undone.
A packet of Woodbines I throw in,
A lucifer, the Sacred Heart of Jesus
Paralysed as heavy guns put out
The night-light in a nursery for ever;
Also a bus-conductor’s uniform—
He collapsed beside his carpet-slippers
Without a murmur, shot through the head

Before they could turn the television down
Or tidy away the supper dishes.
To the children, to a bewildered wife,
I think ‘Sorry Missus’ was what he said.

Wreaths
The Civil Servant
He was preparing an Ulster fry for breakfast
When someone walked into the kitchen and shot him:
A bullet entered his mouth and pierced his skull,
The books he had read, the music he could play.
He lay in his dressing gown and pyjamas
While they dusted the dresser for fingerprints
And then shuffled backwards across the garden
With notebooks, cameras and measuring tapes.
They rolled him up like a red carpet and left
Only a bullet hole in the cutlery drawer:
Later his widow took a hammer and chisel
And removed the black keys from his piano.
The Greengrocer
He ran a good shop, and he died
Serving even the death-dealers
Who found him busy as usual
Behind the counter, organised
With holly wreaths for Christmas,
Fir trees on the pavement outside.
Astrologers or three wise men
Who may shortly be setting out
For a small house up the Shankill
Or the Falls, should pause on their way
To buy gifts at Jim Gibson’s shop,
Dates and chestnuts and tangerines.
The Linen Workers
Christ’s teeth ascended with him into heaven:
Through a cavity in one of his molars
The wind whistles: he is fastened for ever
By his exposed canines to a wintry sky.
I am blinded by the blaze of that smile
And by the memory of my father’s false teeth
Brimming in their tumbler: they wore bubbles
And, outside of his body, a deadly grin.
When they massacred the ten linen workers
There fell on the road beside them spectacles,
Wallets, small change, and a set of dentures:
Blood, food particles, the bread, the wine.
Before I can bury my father once again
I must polish the spectacles, balance them
Upon his nose, fill his pockets with money
And into his dead mouth slip the set of teeth.